Remember when we did a Booty Call giveaway for a bummis cover? We talked about putting a cover over an absorbent material and re-using it multiple times. That’s the bonus of using this system during the newborn stages. If you had to have enough changes for a new pocket diaper or all in one for a newborn, you’d not only be shelling out a huge chunk of change, but you’d be limited in what you could actually use. With a cover system, pretty much the sky is the limit. Old tshirt? Toss it in and go.

Today though I want to touch on using prefolds. What are they? Well, they’re like my favorite (read the link!) flat diapers PRE-FOLDED. Yup, it’s that simple. Prefolds look pretty flat and plain when you first get them, but once they’ve been pre-washed, they quilt up and become very fluffy and soft. I pre-wash with towels or whatever else I’m washing on warm/hot. I’ve had some of them go through 3 kids (newborn stage) now and other than maybe a few straggly threads from the side seams, you’d never know they’d been used before. They’re basically indestructible. They wash well and work wonderfully. They’re cotton so babies feel wet, they’re easy for you to check to see if they’re damp, and there’s limited changes for you baby to be allergic since it’s a natural fiber. They are a 2 step method though and that scares people off sometimes, because they want the easier options. Yes, those do exist. Some options are MUCH easier. So easy that they go on just like disposable diapers.

So why use prefolds on a newborn? Why go back to this ‘old’ way of doing things when there are easier options? To me, it’s mostly a cost thing. Most prefolds check in at under $2. You’d need a handful of covers for the newborn stage, but it’s a really inexpensive system. Although we can afford to buy $15 AIOs that will only last about 6 weeks for our HUGE newborns, I like having a lot of changes. More than once it’s taken me quite a bit of time to get diapers from machine to machine and back into the nursery. Other things end up taking priority. More changes = more leeway. AIOs in that quantity would be pretty darn pricy. Also, my kids enjoy soiling multiple diapers at once. It’s as if a fresh diaper MUST immediately be used. “Yeah, I’m dry! Now let’s soak this thing!” The record for all 3 girls is 4 diapers in a row. Seriously? Don’t ask. So being able to just push another prefold in a cover on and wait during those weird first diaper changes that seem to be ‘the poo that never ends’ or toss half a dozen prefolds and a couple of covers in the diaper bag is pretty priceless. Multiple times during each newborn period I’ve been thankful that I wasn’t dropping disposable after disposable during ONE diaper change in the trashcan. I felt really blessed that I was able to re-use those diapers again and again. Note: the cover in the pictures below has been through the newborn stage on 3 kids and is still going strong. LOVE these covers! The cotton prefolds will last forever and ever, Amen. You really can’t go wrong with this system. Not at all.

So how do you use them? Basically, there are 2 ways. One is to simply fold the fluffy bit in thirds (short ways for a smaller newborn, long ways for a bigger babe) and stuff it in the cover like a pad. That’s the pad fold – easy enough. Some covers have a flap in the front or back that help ‘hold’ a diaper in place. The second way is to use a fastener (snappi, diaper pin, or boingo) and affix the absorbent inner to cover the baby’s entire diaper area (like underwear) then adding the cover. There are many of these folds, some for boys, some for girls, many unisex ones, but basically they all do the same thing. The older and more wiggly a baby gets, the less likely I am to use a fastener. Some of it could be that after a few weeks, I’m able to move faster and am more impatient, too. Either way, both are valid options and have their places. My favorite way to affix a diaper on a really small newborn is the jelly roll fold. I put the diaper under baby long ways, roll in the areas by the legs (as if making the dessert a jelly roll), fold the front up and then pull the back ‘wings’ over and use a fastener. By rolling the legs, you get some ‘blow out’ protection. In other words, because there’s a roll there making it tight, it acts like elastic on toddler underwear-it keeps the poo from escaping! This saves not only baby’s outfit, but the cover, too. It works well at the bottom of the prefold’s weight range. Once baby outgrows a fastener type fold in the waist or rise, you can still pad fold the diaper the long way for a few more weeks or until the absorbency isn’t enough.

Quilty absorbent softness! Fold it in thirds OR… 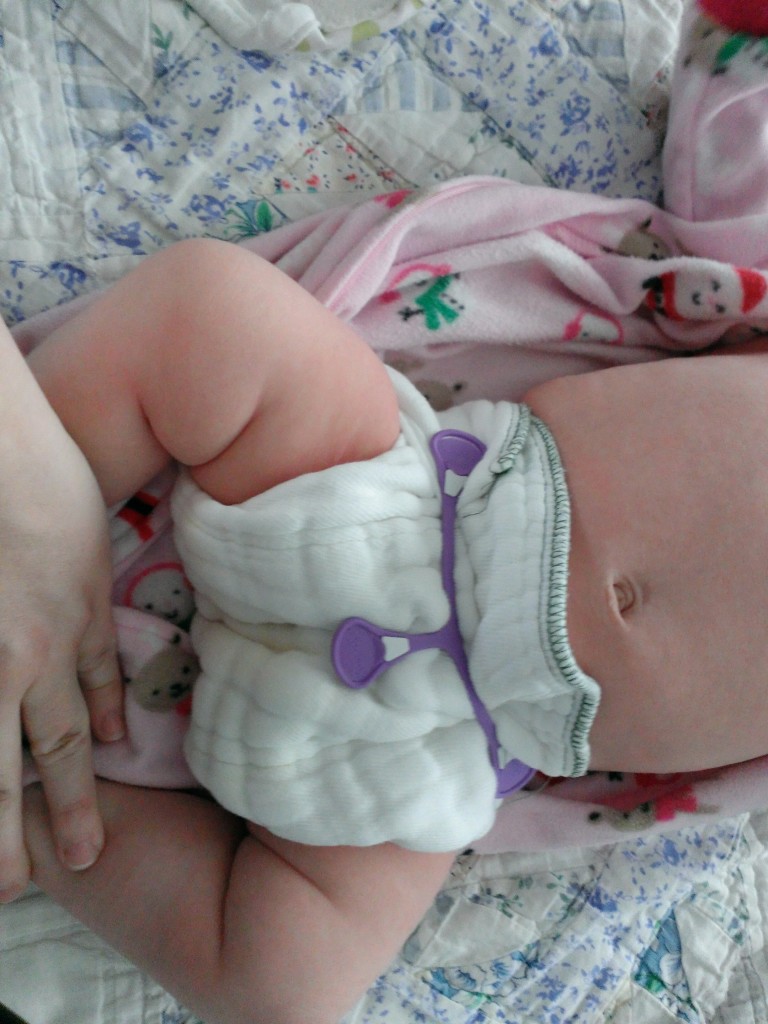 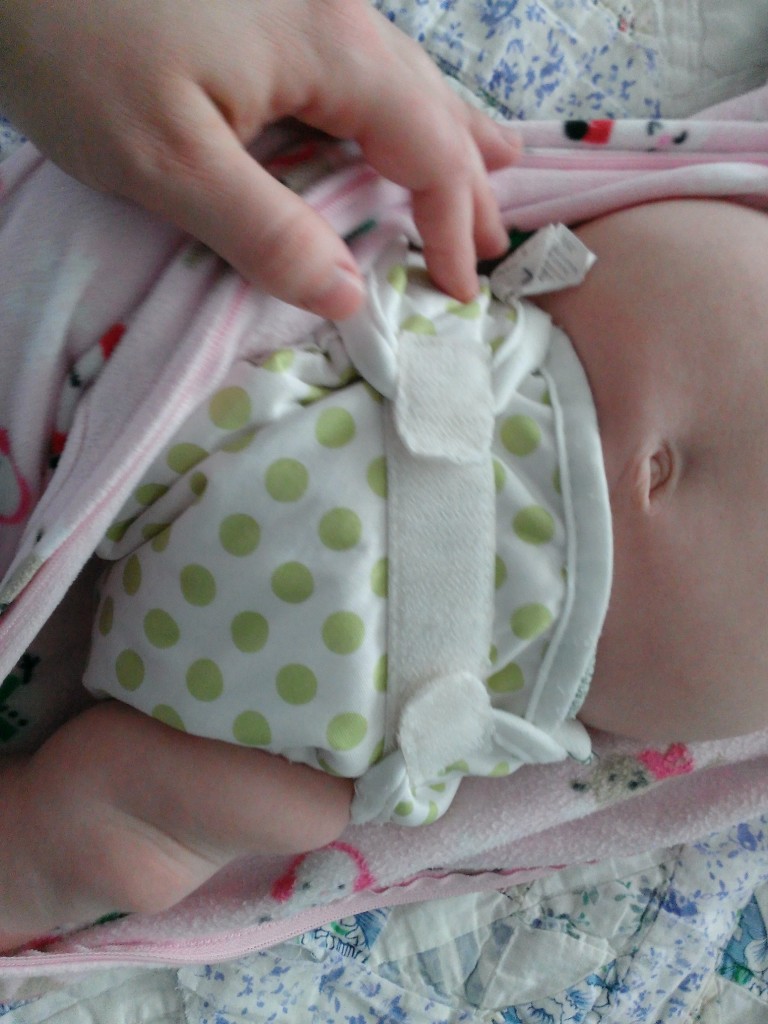 One final note. Newborn or infant size? For us, with our big babies, we ended up with infant size. They worked well. I got a half a dozen newborn sized ones, but they only lasted us about 2 or 3 weeks since they max out at 10 lbs and our babies were around 8 and 9 lbs to start with. This time around, I used them as burp cloths and mini nursing covers instead. If you have a tiny baby or anticipate one, they are still a very inexpensive option, and can be used for other things (like burp cloths,  spare absorption in pocket diapers, etc) once baby outgrows them. The infant size starts at around 8 lbs and goes to about 15. For most babies, this is long enough to pay for the whole system REPEATEDLY when compared to disposable diapers. The same goes for covers. Newborns or smalls should both get you to the 10+ lb weight beginning range for most one-sized diapers, which is often the next step in the diapering journey. Newborns end at roughly 10-12 lbs and Smalls at around 15. It all depends on how big your baby is. If you’re wavering, size up. The worst that can happen is that you have some minor leakage while you figure out how to adjust the fit and as baby grows into them. Weigh that against having diapers your baby only fits in for 2 weeks versus several months. It’s a much easier decision than many you will have to make in the coming years! Basically though? There’s no wrong way to do it. Have fun and enjoy those bitty newborn days!

Is there anything I haven’t covered that you’d like to know? Leave a question in the comments and I’ll email you!