Monday started off kind of slowly. The toddler and Kindergartner have a cold and I was up with the toddler (3 yo) most of the night. Needless to say after a restless night’s sleep the night before with my husband out of state (and no one napping when they should for some unknown Murphy-ish reason) I was completely exhausted. The kids ate breakfast at their leisure and read books before, after, and in-between bites. Finally everyone was done with teeth brushed and unhappily working.

We introduced the idea of fact families to the Kindergartner and factor rainbows to the 2nd-3rd grader. She’s moved from multiplication to division but isn’t grasping the way it all goes together. She knows, but for some reason she refuses to admit it. Story of our home school. Meanwhile the Kindergartner was pleased as punch with her worksheet (both did them from Mailbox magazine articles) that had ‘items that add up to 10.’ This one featured gumballs! She drew 10 gumballs and then used a pencil to color in the number that were there and the number that weren’t colored was her answer! I hope she really understands this, because memorization was not her sister’s strong suit (see previous sentence.)

They had club in the afternoon, the younger one visited the local food pantry to see how it worked and the older one had a lesson on rocks and made fudge from chocolate chips. All in all, they seemed to have a lot of fun! 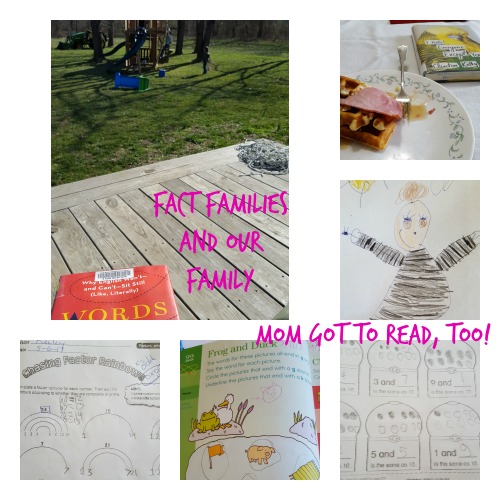 It was a rough night overall because of the kids being sick and my 3 year old sounded like she was headed for bronchitis and refused to A. and B. cough hard enough to clear her lungs. I stuck her in a hot shower/bath and finally got her to lay on the couch, where she wheezed for most of the night. Around 2 am is when the hail really started in earnest. It was pea to nickel size and it came down in BUCKETS. It was understandably loud. So needless to say we got a late start.

We read the book ‘A remainder of 1’ about a soldier bug who strives to make his queen happy by making her troops all march in equal lines. She does not like remainders. Spoiler alert–this has a happy ending! It introduced remainders and talked about how math problems eventually are solved without everything being ‘equal.’ A good, if imperfect, segue for subtraction, as well.

All I can say is that we EVENTUALLY through yelling, tears, and a lot of frustration, got it done. I asked the second go round if we understood the problems any better the second time we spent more than 2 hours on them, and the answer was a shaky, begrudging, nod. Whew. This is not for the faint of heart, ya’ll.

Although this day took WAY too long in my estimation. That attitude is probably due to me catching a cold. Nevertheless, the show must go on! First up, math. The kids kept going on division and subtraction. They’re learning little tips and tricks we all take for granted to solve problems. I delight to see the ‘aha’ moments! Some were fact families, others were just general tricks. We moved into beginning digraphs for the younger one (ch, sh, th) and synonyms for the older one. Then we broke for lunch and everyone read in the afternoon. My husband got home from his business trip and everyone freaked out showing him their new tricks. The baby took a few steps. The older ones climbed the easy or hard rock walls according to ability. He was suitably impressed. We had spaghetti and breadsticks. The only thing not ‘diy’ was the pasta. Boxed pasta is just too cheap and easy to try and do that ourselves. We were all happy and full at the end of the day!

The older one did a mix of multiplication and division review, where she had to watch the sign and some plurals. Imagine my face as I strain against giggling when she tries to figure out the plural of ‘moose’ and fails. Repeatedly. The younger one kept going with higher and higher levels of subtraction and worked on the idea that sentences begin with a capital letter and end with a period. We talked over and over about the ‘adds up to 10’ having buddies. Fact families of 9 and 1 making 10, for example. Their dad was home so they did not do a whole lot in the house after that. Instead, they played outside in the beautiful weather. I got to snap a few pictures outside, which I adore.