Welcome to the third and final part of the series on Rock-A-Bums diapers!

Have you read Part 1 of this series introducing Rock A Bums? If you want, pin it for later!

Have you read Part 2 of this series talking about using them from birth, even in the hospital? Pin it for later!

Great! Now that you’re caught up…. here’s part 3! I’ve been using Rock-A-Bums for 10 months now. That’s a LONG time for a review! I was sent 3 diapers to use and review, along with 6 inserts. They have also generously offered to send a diaper with 2 inserts to one of my readers! Stay tuned for the Giveaway below and see some action shots of a real baby (mine!) in Rock-A-Bums. 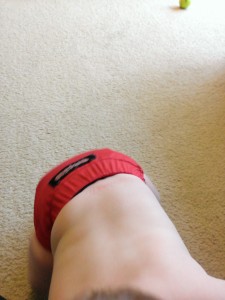 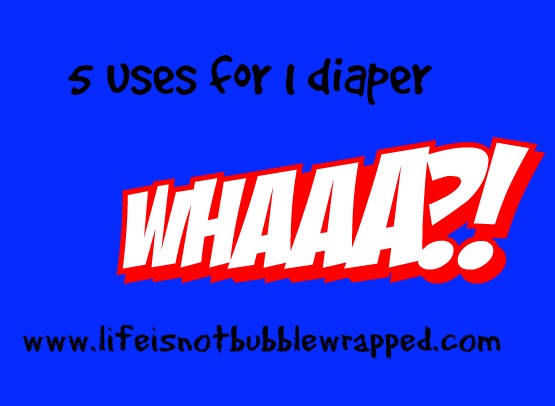 Rock-A-Bums prides themselves on being a 5-in-1 rock star worthy diaper! How do you get 5 in 1 you ask?

Check out their explanation here! The only way I did not use this was as a hybrid/disposable option.

I did use it in the other 4 configurations with good results! My favorite is the pocket diaper (stuffed, not snapped!) like is shown in the blurry action shot below!

There are several different rise options, the lowest fitting a large newborn with ease, and snaps on either end allowing for full coverage used with 2 inserts.
This was one of my favorite ways to use it as a newborn, as well, with one insert in, and one out of the pocket.

In this configuration, a newborn ‘oops’ that doesn’t go all the way through the top insert can easily be snapped off.

Perfect for ‘on the go’ in the diaper bag! The inside layer if dry serves as a back-up.

Just keep going. OR… snap a new insert on top.. and go! 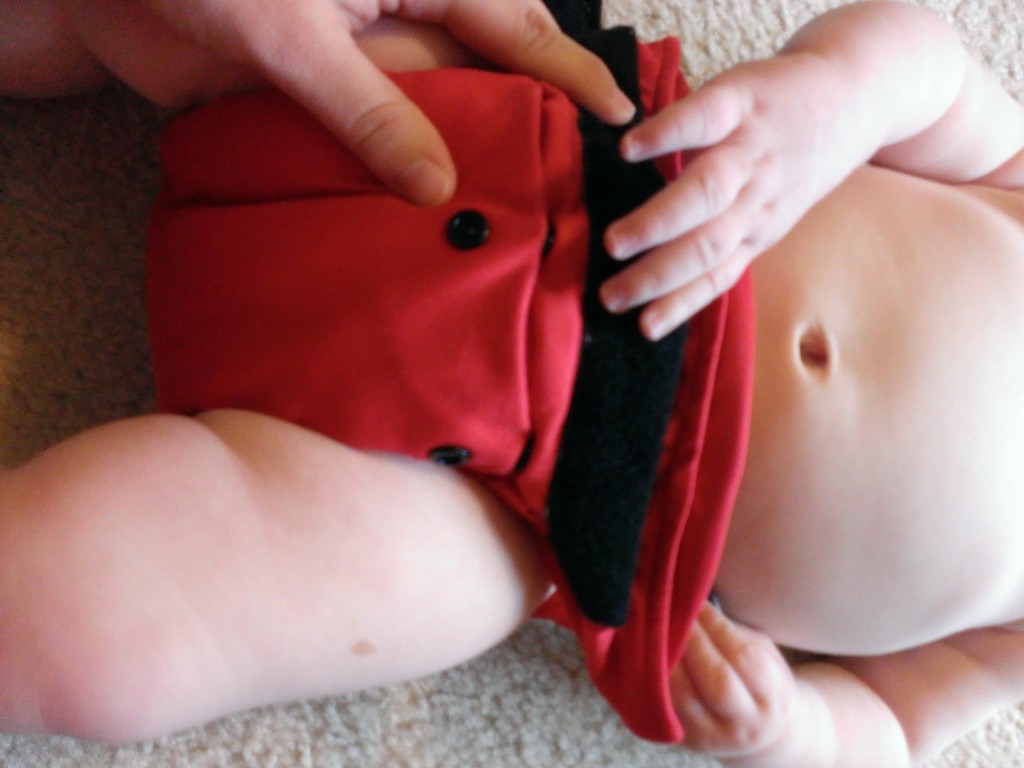 Overall I’m impressed with this diaper. It has never leaked when used correctly. With 2 inserts in, it’s held a super soaking amount of pee.

The inside of the white diaper (shown below) is a little pilly, I think from debris from other diapers–it is hung to dry as my dryer eats snaps.

The inside of the other 2 diapers (red, black) are still clean and sharp looking.

There is a bit of lint gathering around the Velcro, but the elastics are holding strong, despite a lot of use.

This is one diaper I will reach for if I know we will be gone for a while during the day.

My husband also likes these.

After 10 months, no microfiber stink. 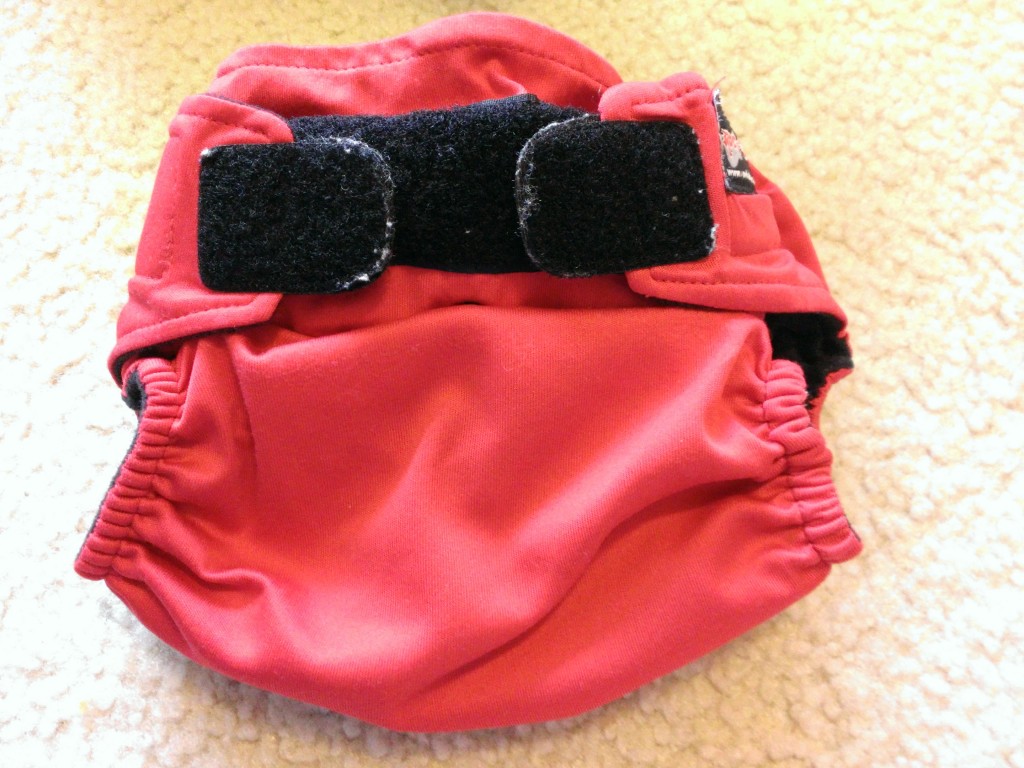 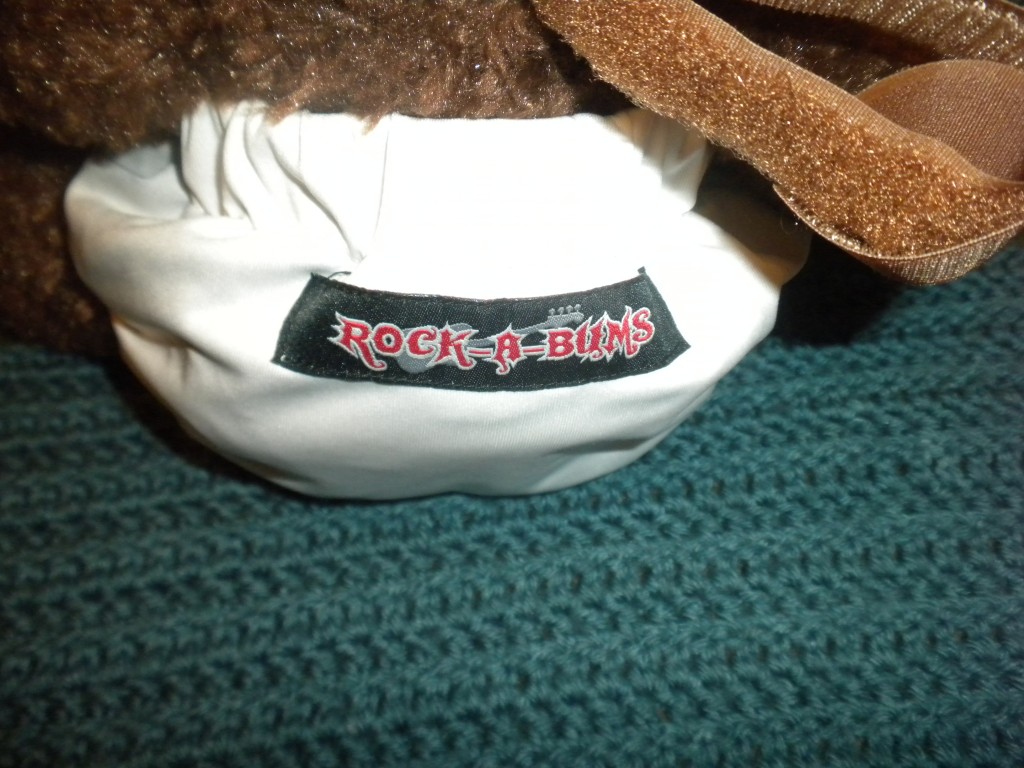 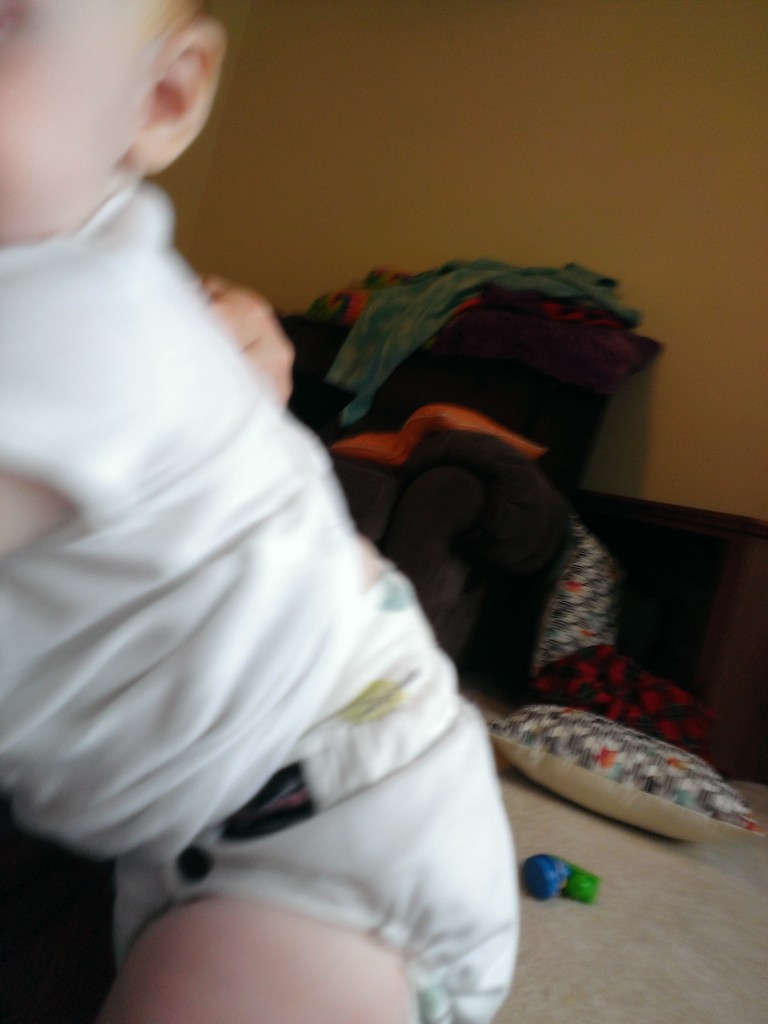 I was lucky to get the action shot above.

I was out of my regular covers and didn’t have any diapers stuffed, so I grabbed a small flat, wrapped it around with a snappi and toted the baby across the house to the laundry basket.

I may have squealed with joy when I spied this on top, and snapped the cover on.

It did the job and kept the floor dry until I could stuff the diapers and get them put away!

RAB to the rescue! 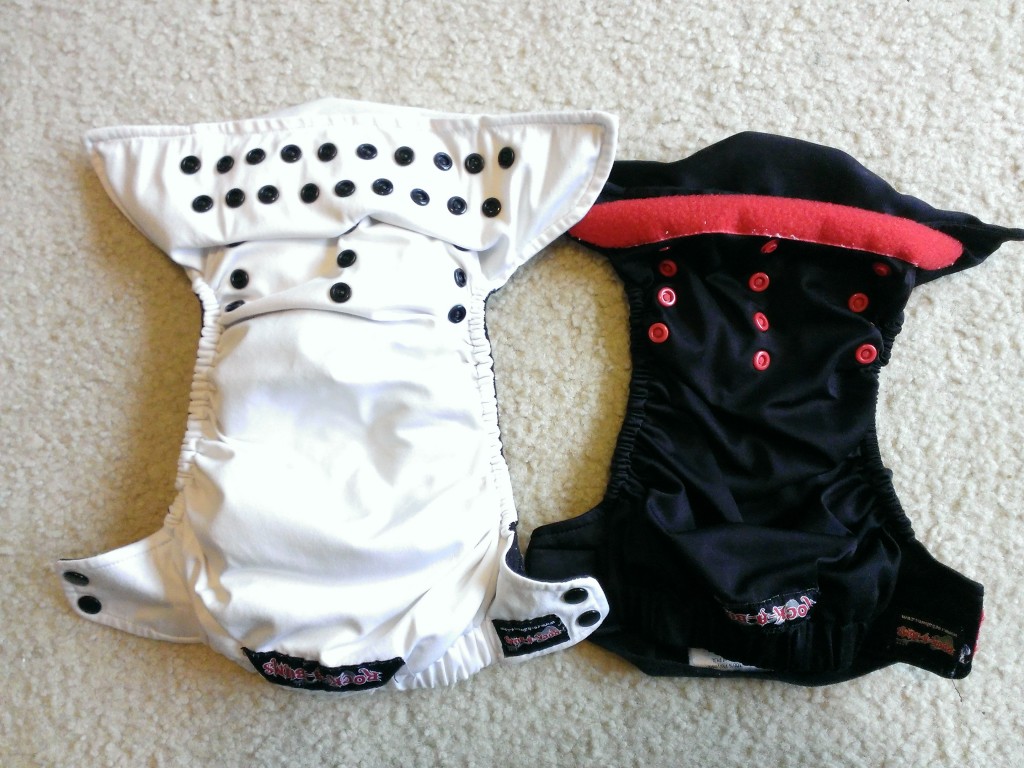 Comparison of snaps with Velcro 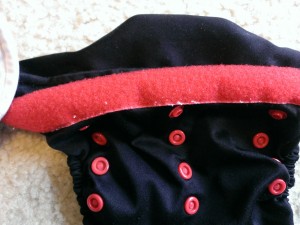 Shortened length due to rolling Velcro 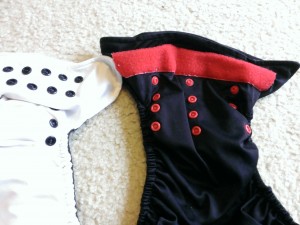 If I impart nothing else with this post, I want to show the difference in the 2 closure options.

I’ve found that the snap diaper stays smoother on baby’s tummy, as the Velcro rolls with extended use, and even when pulled out flat, it will roll back up when placed on baby, and can be irritating to sensitive skin.

For the long haul, if I was to make a purchase, I would choose snaps.

Check out the prints below. Winner gets their choice of color/print and closure.
I know I would choose the wildly colored Zanadu in snaps, how about you? 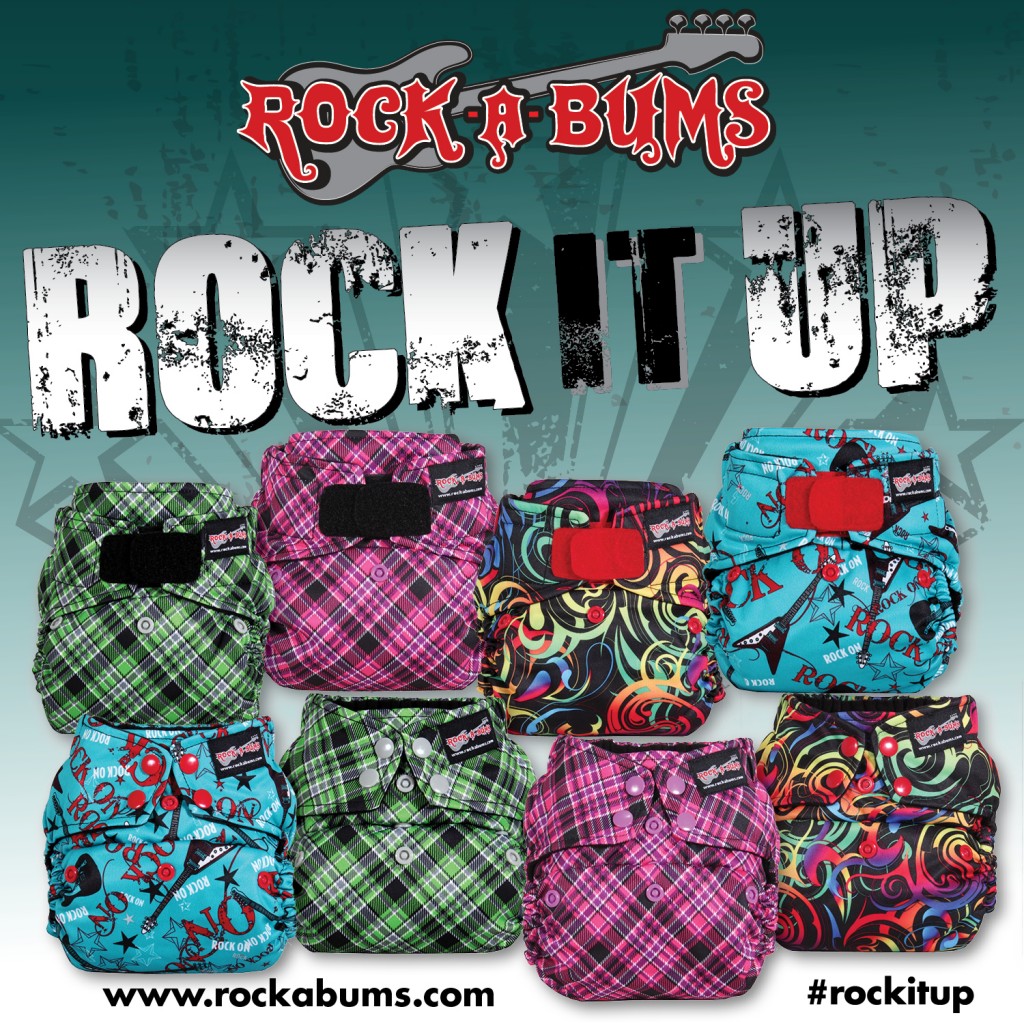 Be sure to read each entry carefully. Commenting and tweeting are available daily, but be sure to follow the instructions!

Entry-Form
Disclosure: This  is the third and final installment in a series of posts dedicated to reviewing this diaper. Rock-a-bums sent me 3 diapers at no cost for review. Another diaper and set of inserts is being provided for giveaway purposes. I was not compensated otherwise for this or the previous posts. All opinions are my own and not influenced by the sponsor/manufacturer. As always, this is my blog and I tell you the truth. My humble way of saying, the opinions are my own, and may differ from yours, so use your best judgement in every purchase decision you make–wise in these economic times, right?