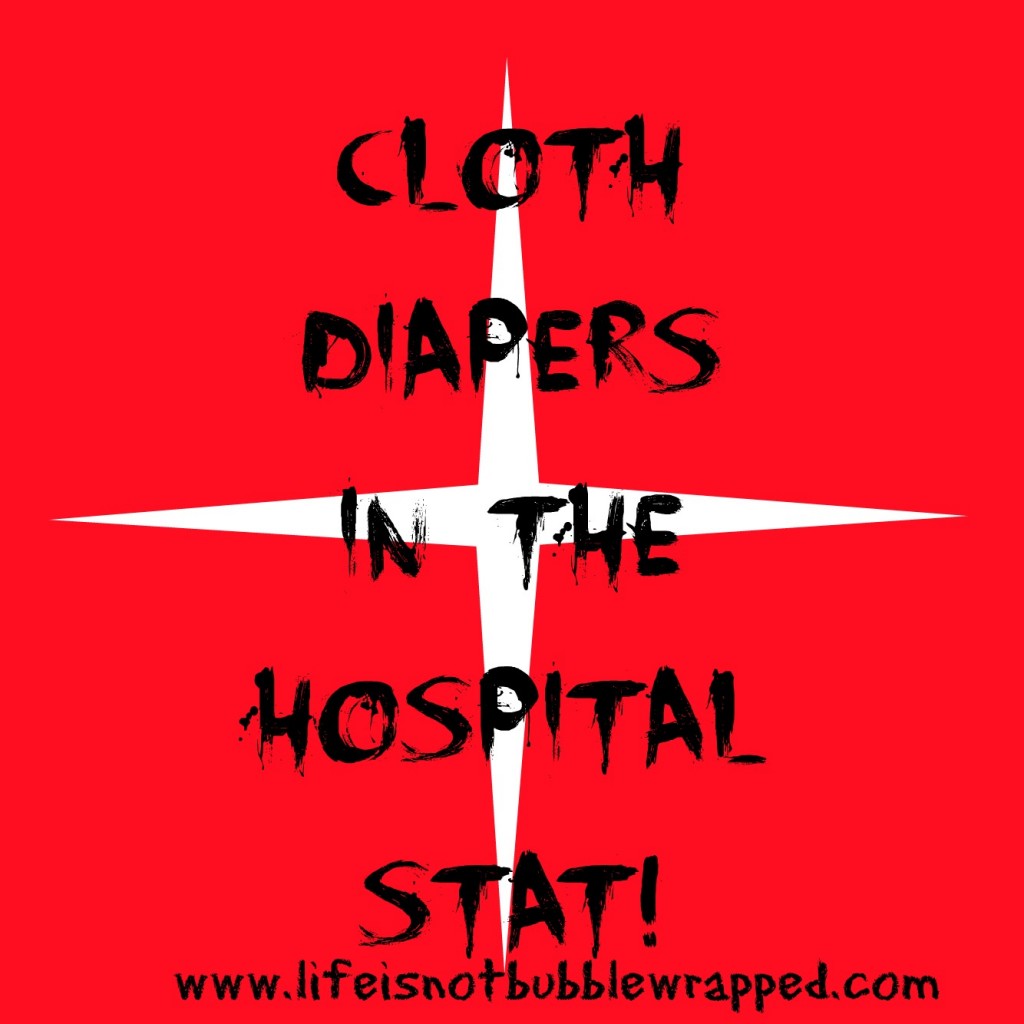 Using cloth diapers in the hospital

Do you remember right before my little one was born that I introduced you to Rock A Bums on my little friend?

Well, by all means CLICK HERE and get up to date! Go on, he’s adorable and needs you to give him a little love! I blogged a bit about how I thought the diaper would fit a newborn and ways in which it might be used. Just like on teddy, I was pleasantly surprised that on my 3rd little bundle of PINK!!! there were no gaps, even on my newborn’s legs (~8 lbs +). Basically my baby was over 8 lbs but lost weight in the hospital. She’s several pounds over that mark now, and it still fits on the lowest rise setting, and has..broadened out a bit in the waist. That’s a polite way of saying that she has a baby pot belly! The elastic is very trim on the legs when snapped down. With one insert, it fit underneath baby’s belly button in the first week, but could be snapped down tighter for a smaller baby at the waist, as well. I liked that the snaps were offset, as they allowed for a more snug fit where you need it, with breathing room elsewhere-something uniformly aligned snaps don’t allow without gapping or looking strange. 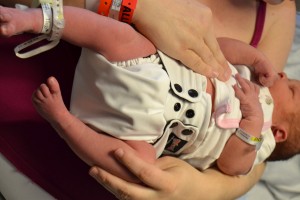 With room to go smaller, yet fits under belly button!

I posted with our model teddy that I was excited about how customizable this diaper is, and I can say that I’ve used it over prefolds and fitteds as a cover, with an insert snapped in as an AI2, as an AIO and pocket diaper. Basically I’ve given it a run for the money, both in the hospital, and in these first 5 newborn weeks. Most one size diapers start fitting at around 10 lbs, but I’m confident that these would fit nearly any newborn that’s even close to 8 lbs (average newborn size) using snaps, and smaller still with the Velcro, since it could be crossed over or ‘angled’ down for a smaller fit at the legs. Speaking of the velcro, it is TOUGH. That stuff is not going to come loose. In fact I’d hesitate to send it to my parents with arthritis, because I’m not sure they’d be able to get it undone. For most parents, not a problem, but a HUGE bonus, as toddlers are not going to have an easy time ripping these bad boys off! I like how the tabs fold immediately over, as well, because you’re not ‘hunting’ for the laundry tabs on a dirty diaper underneath baby’s bum. So far they haven’t stuck to anyone or anything else and haven’t come loose in the wash. 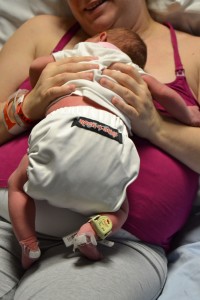 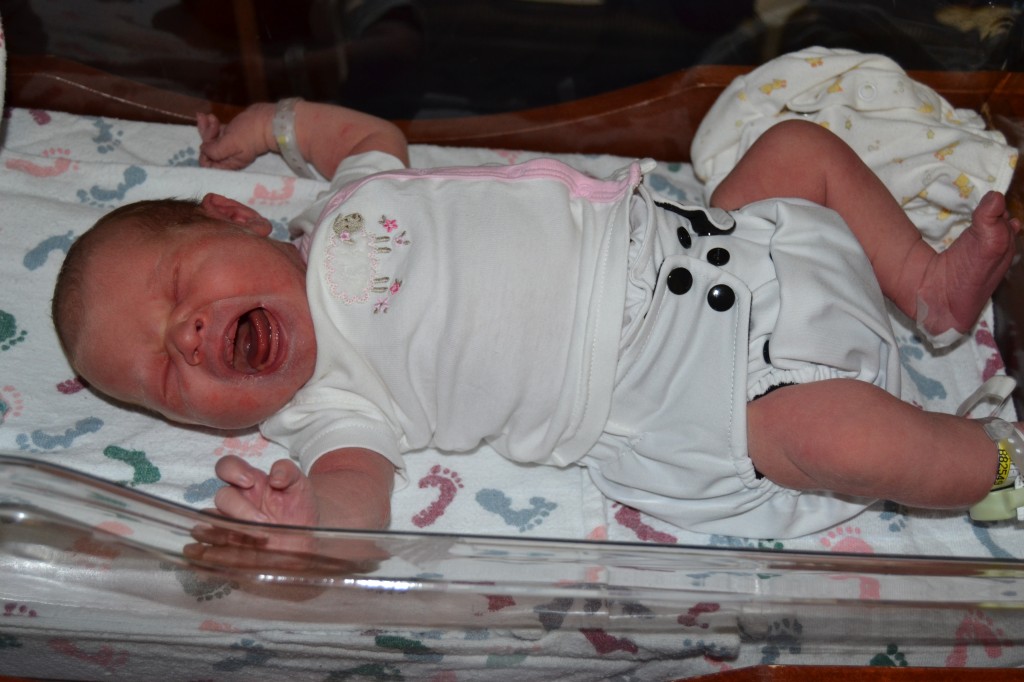 How dare you put me down to take a picture of my cloth booty?!?

As you can see, we used these in the hospital, and they were easy on/off, which is good because newborns need changed frequently! We had no blowouts, leaks or other problems with using the diapers. Meconium doesn’t stain, but if you were really paranoid about it, using the gray inserts and/or black inners would ease your mind, I’m sure!

Insert tips when used as an All in Two:

1. Snap it in, and then kind of ‘stretch’ the elastic while you tuck it in for a firm fit within the cover. Aligning it along baby’s vital bits carefully when putting it on is helpful as well, and can keep the outer shell clean.

2. Always snap the insert at the front of the diaper when using it as an AI2–you can unsnap, wipe, wrap it up, and then re-snap in the front without having to completely remove the diaper from under baby’s bum to wrestle with the insert. Since your bowel movement is generally constrained to the back in the newborn stages since baby is always laying on his/her back, your hands will stay clean and so will everything else. It’s nice to have the choice, but that worked well for us.

3. The pocket part doesn’t seem to get ‘wet’ when used as an AI2 like a regular pocket diaper might. It makes me feel good about using it over again, as a pocket or AIO if desired. 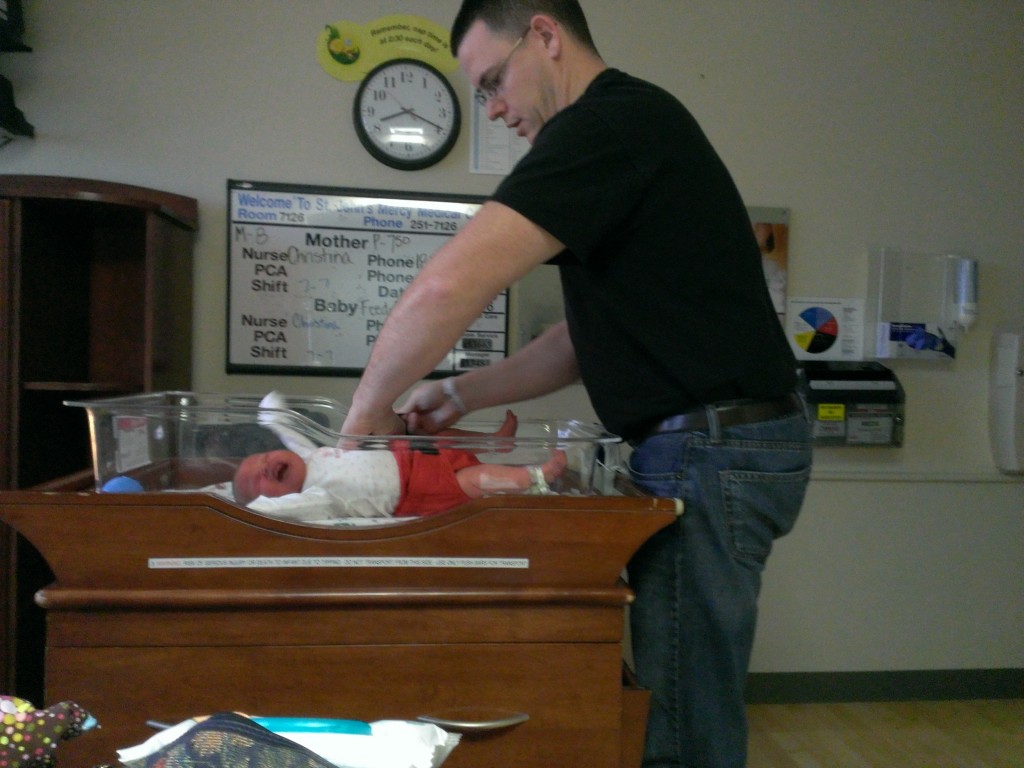 Daddy can do it too!

When baby was about 3 weeks old, we ventured out to an event, and put our newbie in her red Rock A Bums, as it was a seasonal occasion, and VERY appropriate! Did I mention that having the choice of how to put this one was handy? For this event, we hoped to not have to even change her. So my evil plan was thus, and I think I’ll use it again for this diaper and others, using these inserts– I put one insert INSIDE the diaper, and one insert snapped in as an AI2. Since newborns can go through 4 diapers in a change sometimes (or is it just mine that do that?) I figured we’d head out with them in like that. Then, if we had a sporadic bm with no urine, we’d just take the top insert out and use it as a pocket diaper! Thankfully I didn’t have to do that, but it would have worked brilliantly! We were gone several hours without baby fussing about feeling wet, didn’t require a change, and held up to my heavy wetter. We also relied heavily on these diapers and their re-usability during a recent power outage. Even though the covers were all soiled and needed washed, we could still use the inserts with a newborn cover in a pinch.

The only cons I’ve come across are minor and one of them is expected: it’s an AI2, and when baby poos, there’s a chance the cover will get dirty. I’ve been able to wipe off incidental transfer (from a wipe, etc) with no issues and re-use the cover. Sometimes the cover is significantly dirtied and can’t be reused-that’s the issue with using an AI2 system-sometimes your plans for re-use get.. well, blown. The second one is that the inserts have picked up some fluff from other diapers, but that’s cosmetic and doesn’t show unless you’re changing the diaper-white fluff shows up on gray and not on other white. Is that physics? Art? Laundry? Point being, the color is different, so it shows. Not a big deal unless you have OCD-like tendencies with your diapers. The third is that the inserts can’t really be scrunched down any, so if you snap them in front and tuck them under the front flap, it can cause a small bulge above the top seam at the waist. It doesn’t affect performance and will go away as baby grows and the diaper rise extends, of course.

I’ve used the inserts inside other covers and if they were small, folded one end or the other up and tucked them inside flaps, and again, it worked out well. The inserts seem to absorb a lot, although I’d need to test it with an older baby to say for sure if it was more or less than other inserts.

My husband’s take: He likes these and would like to see how they perform past the newborn stage because he thinks they’re fairly bulky. He’s not as confident about the snap alignment, and thinks they can get too tight on the legs if you try and match the waist up together. He enjoys that I can say ‘you know the gray ones’ and he knows exactly what to get (or maybe that’s just me) and says he would ‘definitely buy some’. All in all, that’s pretty high praise.

Disclosure: When I first posted in November, I received a giftpack of  cloth diapers from Rock A Bums in exchange for my honest review. All pictures, words and content are mine. As always, this is my blog and I tell you the truth. My humble way of saying, the opinions are my own, and may differ from yours, so use your best judgement in every purchase decision you make–wise in these economic times, right?