Imagine… you walk into your house and smell fresh bread baking….

Wonderful, right? Last weekend we had a Fleischmann’s Simply Homemade House Party. In case you’re not familiar with House Party they are a cool company that provides a product with great exposure and people with party packs to host a party. You sign up on their site and then they email you opportunities to get involved. Oftentimes there are MANY more people wanting to host than there are party packs. They try and match up people with their interests as best as they can so even though I’ve applied for about 25 of them, this is my 3rd house party. You can read about the other ones HERE and HERE. Unlike Tupperware or other parties, this one doesn’t require a purchase of any kind. Often, the party packs provide some freebies for the host, product, of course, and coupons and promotional items. It’s not a ‘sell’, though.

For instance my pack this time contained: coupons and 2013 calendar magnets for all the guests, a thermometer, an apron, 2 free bread mix coupons and 2 bread mixes. The paperwork inside encouraged me to use one of the mixes or one of the ‘free’ coupons to try a mix out and see how it went, and then have everyone make/eat bread at the party. I made the Italian Herb mix to try it out one day with our dinner. As promised, it was done in under an hour with no kneading! We let it raise for 1/2 hour like the package said and it didn’t raise very much, but it was REALLY good! We had it several times over the next few days simply with butter to go along with lunches and it kept a good taste and texture. I’d compare the size with a banana bread versus a yeast bread.

We checked the website and discovered we could let it raise up to 2 hours, so on party day we did that (we used a coupon and bought the multigrain mix) and it raised a bit higher, but still not as high as you would expect from a yeast bread. Again, it was really good, and I served it with butter and  homemade jams. We also use the country white mix that came with the pack and the recipe on their website for cinnamon rolls. Since there was some extra work involved, it did take a bit more than an hour with ‘help’ to finish them, but the end product was pretty good.

As you can see, there wasn’t much left… of either one. 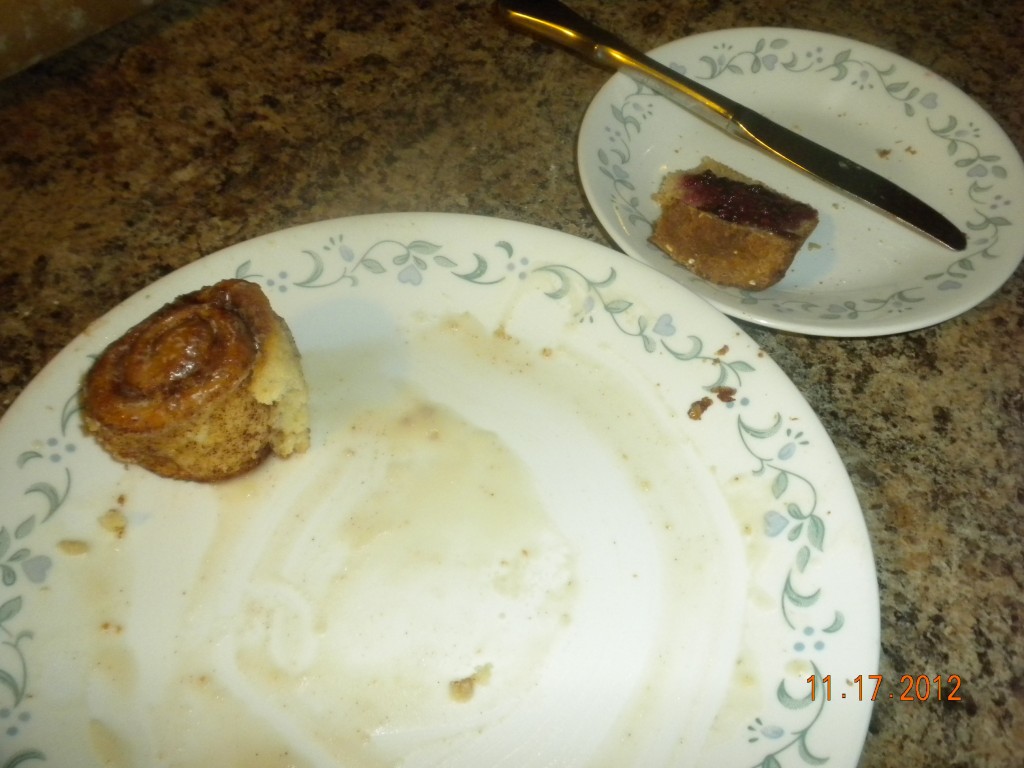 I can see that you would use this product (which is shelf stable) when you’re working or have a busy day and for example have something in the crock pot for dinner. Come home and mix it up and let it rise and then set the table and get everything plated while it bakes. If you wanted to make some fancier sandwiches, or just to have an ‘extra’ on hand in case you have unexpected company, or you just don’t have time to make a dough from scratch or even ‘quick rise’ a frozen loaf of bread, which has been our go-to.

I’ll give you an example: cinnamon rolls. Usually it takes over 2 hours because you have to let them rise TWICE and let them rest and then bake them. I only do this about once a year because to make them fresh for breakfast in this house you’d have to be up around 4, and not make ANY noise.. yeah right. The alternative of course is what we call ‘bang’ cinnamon rolls (from the noise it makes when you open the can). You place them in a pan and bake them for a few minutes and they’re done. The recipe I linked above would be a GOOD compromise, especially if you want to make them fairly often. I don’t think if we tried again (without a house full of people) that it would take that long. Everyone was talking and having a good time and I kept getting distracted… so it may have taken a bit longer than I expected.

The cinnamon rolls seemed to rise pretty well (perhaps it is there size, or the fact that I left the oven open for a while so they got some REALLY warm air!) so maybe making a mix into rolls would also be a good experiment for another time, or maybe the white bread mix was not as heavy as the other 2 we tried.

The value for the mix in our area is actually pretty good, although the only one we’ve found so far is the multigrain, it’s $2.28 at our megamart. Compare that to a tube of cinnamon rolls, assuming you have a full pantry anyway if you’re baking, then a few sprinkles of sugar and cinnamon won’t bankrupt you versus the ‘bang’ biscuits. I don’t think I would use this every week, but definitely for special occasions and to have around as ‘extras’ this would be a smart thing to have on your shelf. It would also be a shelf stable ‘extra’ to donate to a food pantry and provide bread for a family that may not have the freezer space to freeze extra bread like we do. If you decide to give it a try, let me know what you think.

I received a party pack in promotion from Fleischmann’s Simply Homemade, but blogged of my own accord. Not affiliated with Facebook or any other entity. As always, this is my blog and I tell you the truth. My humble way of saying, the opinions are my own, and may differ from yours, so use your best judgement in every purchase decision you make–wise in these economic times, right?