Last month we were selected to host a Lego Duplo House party. We held it this Saturday at our house. We sent emails, printed up flyers, put it in our church newsletter, sent them home/ had them mailed to all the kids, sent out repeated facebook pleas… and…we had 6 kids including my 2. 🙁  Although the turnout was disappointing, I had 2 friends who kindly sent their older kids– at least they took pity on me– we still had a great time. My plan was for the kids (target age 1-5) to gather, read the story to them, have them each build– sharing if necessary, and then let them loose with blocks, toss them some cupcakes and let them play outside. 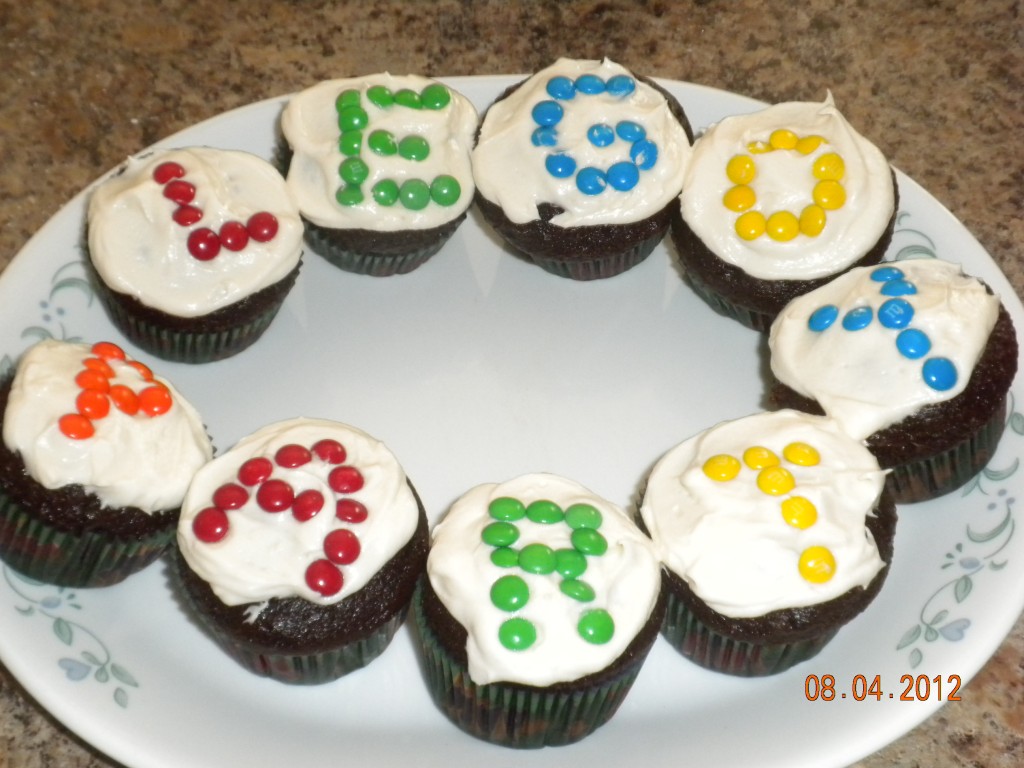 The night before the press release about these was issued, we saw these build and read kits in the stores and we were wowed! They retail for about $12 apiece so it’s not something we could just go out and snap up. They would be great ideas for birthday presents, though! The idea is to build reading skills by interacting with the toys and the book. This is for pre-reading before Kindergarten. We did invite all the kids in her age range from our church and some other friends. We’d have had almost 20 kids if everyone had shown up. I had grand plans for gift bags to giveaway, perhaps games to draw for the lego kits, and etc. if we’d had the little kids there. My back-up plan was to have the older kids answer questions about building things.. you know, expand their minds, and maybe get them inventing. Instead, they chose to play with our baby, lol. They did, however, play with blocks and color some duplo pictures.  My kid surprised me by saying that someone’s sun was ‘going down’ because it was orange instead of yellow. How about that!?! Ours was the farm one (they also have one about vehicles and caterpillars growing). We even made up silly names like ‘mooster’ for a half cow, half rooster after were done playing with the blocks. The clamshells these come in are easy to carry and snap closed with the blocks and book inside, so  they’re easy to carry, would be easy to take in the car, too! 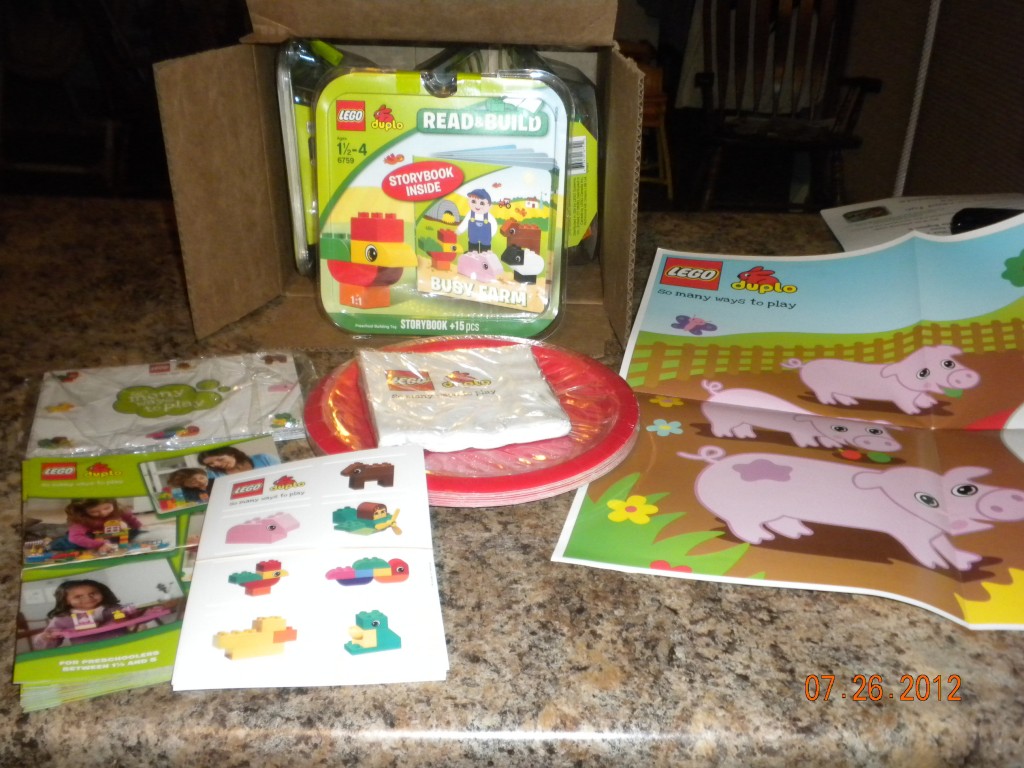 Here’s the kit: a poster, 4 block building book/kits, magnets, sticker sheets, brochures for legos, plates and napkins. If you’re interested, House Party does these types of events all the time. In fact I did a cooking one a while back. As a matter of fact, they’re doing a Fisher Price Playdate for mid September, and applications are still open. Yes, we’ve applied. My thought is to host it at our church perhaps on a Sunday while church is going on so that we have a captive audience, lol. Maybe it was driving 4 miles out to our house on a Saturday afternoon that was just too much for people. I don’t know. Since our attendance was low, the unopened kits and leftover goodies are going to our church, those kids are going to get to play with them, one way or another! Anyway.. I do hope we get the FP playdate, because it’s 3 fairly large toys including batteries if needed that are sent, and they are tuned to your child’s age. How awesome is that? We’d follow pretty much the same format if we got it, except the location. We’ll invite the same kids and most of them will be there, anyway, because they are there every week. 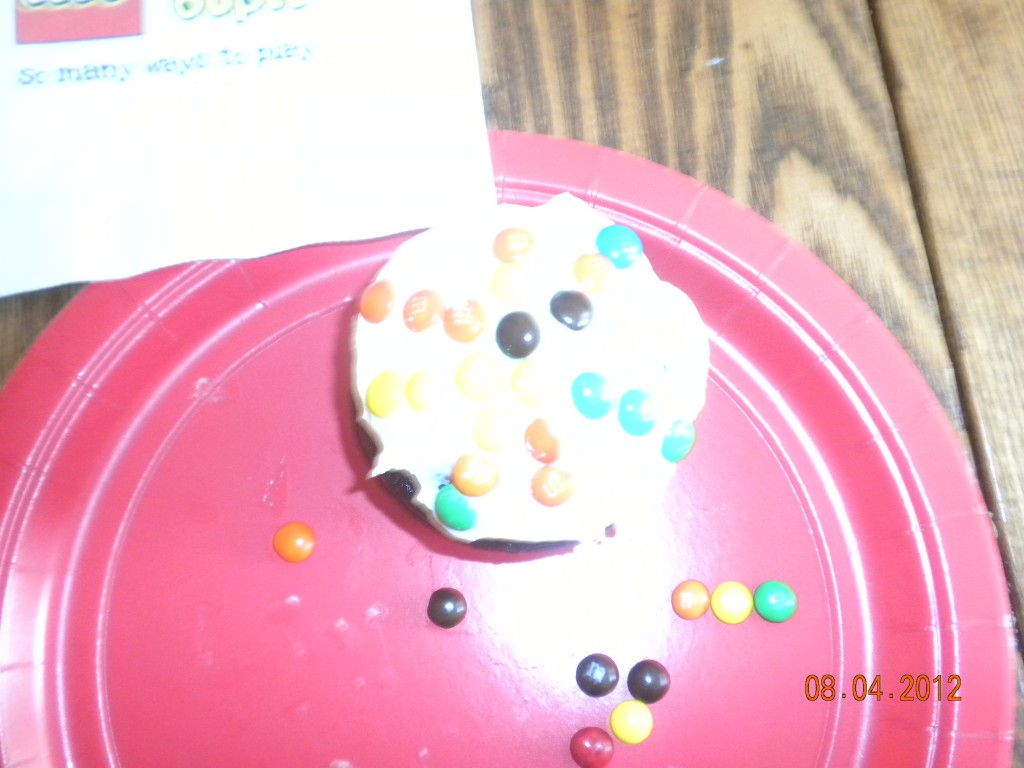 Creating their own cupcakes!

This is also the week of our college homecoming, and we’ll probably take the toys with us (and the blocks for sure) and keep our little ones busy waiting for events to start! Have you ever done a house party?