Okay, so you’ve already seen my bacon and egg(s). What’s next? Toast to go with it, or rather, bread? Sounds good.

Please let me digress for a minute. My grandmother (God rest her soul), was a seamstress. She worked for a uniform place, stores, and took in sewing besides. She worked into her 80’s, I don’t think she knew how to NOT work. When she started being a danger to herself, she was moved to a nursing home. The children and grandchildren went through her house, ‘taking’ things they wanted. This is because her house HAD to be sold to take care of her. Yes, everyone tried to get her to move into an assisted living place earlier and so on, but it didn’t work. Bygones. I didn’t take anything of any monetary value. I took things of a sentimental value. Tea towels. Even though my grandmother loved sewing best, she also did embroidery, including tea towels–of which I took a few from her kitchen drawers. I took a couple of iron-on patterns, and made myself some towels, using her embroidery thread and needles, and her scissors with her name engraved on them. I grabbed this weird looking box, and grabbed a bunch of sewing stuff and crammed it inside. I love that box. It represents, ties. Ties more than rope can bind. My mom insisted I take grandma’s sewing machine. I don’t currently use the machine, but I have it! Instead, I hand sew. I use colors of embroidery thread she picked out, needles she bought and never got around to opening, patterns she had once ironed onto towels herself and given as gifts. I dry my dishes and wipe up messes with items I made in her spirit and I remember her.

My grandmother also kept just about everything. (I have a jar of random buttons picked from hundreds she had stored away). One thing she kept was this Holsum bread novelty needle holder-I use the needles to hold my felt pieces together… the novelty is shaped like… a piece of bread. Can you believe it? Do you see why I digressed? She saved THIS and years later I used it to make my VERY OWN PATTERN! A couple of paper clips and voila, bread! I bet she could never imagine that her granddaughter would use the novelty needle holder to make felt food bread for her GREAT granddaughter to pretend kitchen with years later. The cigar box is FULL of embroidery thread, btw, she’s written, ‘floss’ on the side, there were 50 cigars. I wonder who smoked them? 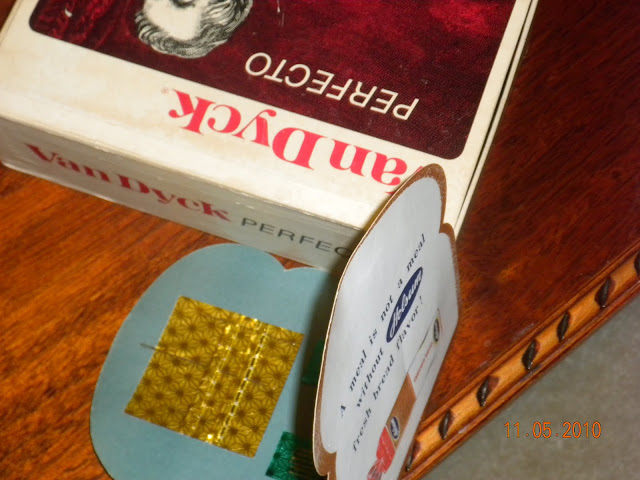 Here’s a picture of my bread with cheese, which I learned how to make from: Helping Little Hands tutorials. They’ve got a BUNCH up there, and I was so excited, I have swiss and cheddar (the yellow peeking from the right). So far I only have one piece of each, but I may do more, it was really easy! 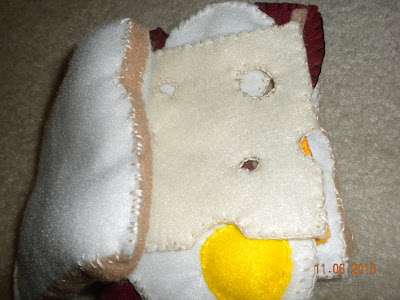 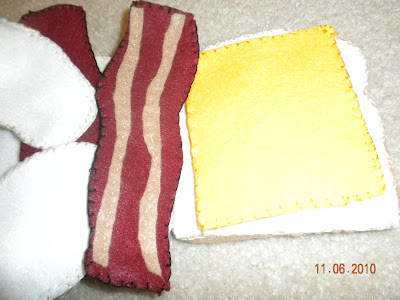 The bread was a little tricky and the seams aren’t perfect, but then again, when is anything handmade ever ‘perfect’? There’s beauty in the knobblies and knots. My point in this exercise is to make something functional and safe for my daughter. By myself. I can see her play every day with something my 2 hands (and sometimes my hubby’s, when he untangles thread for me!) have touched and brought to fruition. Since I already had ‘borrowed’ scissors, embroidery thread, and needles, all I really needed was the felt. For about $20 I am going to outfit my daughter’s whole kitchen!

By the way, if you need to find any tutorials, the best way is to follow from one link to another. People are usually pretty good (as I try to be) as to where they find the info on how to ‘make’ whatever they made. You can use ‘felt food’ and ‘keyword’ also to find not only tutorials and pictures to get ideas, but also etsy stores, ebay and so on and so forth, if you DON’T have the sewing gene. I have the ‘stab yourself with a needle repeatedly’ gene, apparently. I would wear a thimble, but I jab a different finger each time, don’t ask!

Special thanks to Polly from Helping Little Hands (link above) for answering my questions about the cheese! I plan on trying to do ham or some other lunchmeat or pb&j soon, as well as some veggies, pickles, etc. Stay tuned for Fun Monday tomorrow!