Week 30- This week was about solidifying skills by plugging along in their workbooks. Since the majority of it was similar to the St. Pat’s skills they worked on last week, it was mostly a piece of cake. That’s an idiom for easy. Right? These silly pieces of grammar are very much woven into our English skills, but strange for the kids as up and comers.

My younger one worked on recognizing complete sentences, periods, and recognizing a noun (called a naming part). She also did a lot of addition and subtraction review (duh she’s K-1st, not a shocker) and reviewed her spelling words from the beginning of the year. She also has been focusing on copying new words in things like social studies, writing day and night words, most of which was a review of their solar system study, of course!

The older one finished her tiny division workbook, and practiced multiplication and division, as well as deciding which sign/function you need to do to solve a particular problem. She worked on compound words, syllables, pronouns, analogies, articles, idioms, you name it, we had a tiny bit of it. 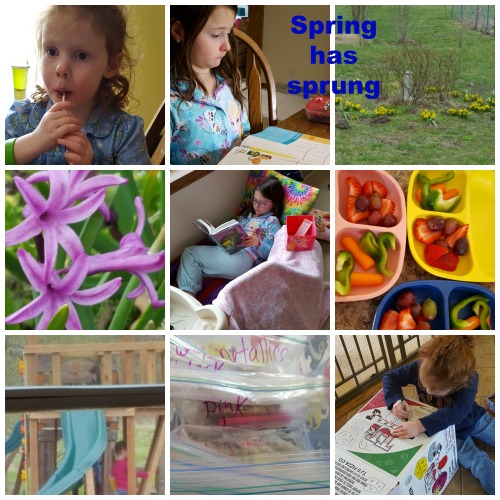 They have started up swimming again, so they did that and their religious club this week. They also tried new foods, which they assumed were poisonous. Asparagus was okay I guess. Sweet potato anyone? Even with a sprinkle of brown sugar they were given the EWW! A baked potato with sour cream? Inconceivable!

They read outside after a library trip, organized the big box of ‘extra’ crayons, decorated our box for Lent donations, cleaned out the candy jar, and we shopped for lots of fresh produce they love! We even moved bulbs from a larger circle into a smaller one. We tried this while I was pregnant around 18 months ago and we missed some. Ha! Imagine at 9 months pregnant not digging out all the bulbs you wanted to move. Again, inconceivable!

Meanwhile I’ve done some research on bullet journals and am following the format somewhat in my planner. I’m getting some (more) things done. I’m trying to get healthier as well, needless to say I’m falling apart at the seams. Mom has to be put back on her own list, starting now. I am cooking more veggies, trying to drink water (kicking soda for now thanks to my dentist’s dire warnings) and making more THINGS like bread! It’s been a busy, dirty dishes kind of week!