This week we focused on all the workbook things we are learning, but through St. Pat’s skills worksheets. It’s a fun way to celebrate the holiday while still keeping to our schedule. We made some treats, saw some wildlife, played in the snow, and celebrated the holiday by putting the baby in fabulous green cloth diapers. Good times. 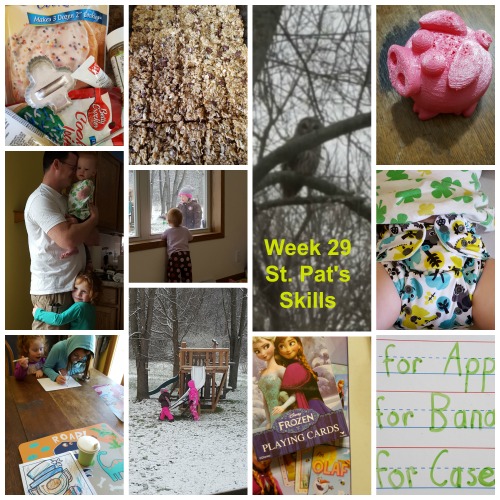 During mathematics she reviewed skills like counting and writing numbers. She learned tallying. Addition and subtraction are key new skills. I introduced 10 frames as a way to help her memorize her addition up to 10. It should help with those key subtraction skills as well. She also graphed and used skip counting by fives and tens to hone those. She wrote mixed up numbers in the correct order. Later, we did ‘before and after’ numbers. I suppose that helps when you’re counting in higher numbers. Transposing numbers is still a problem, but we’re working on it. She also added balloons three numbers instead of 2. Wow! A brand new concept was odd and even numbers. I wasn’t sure if she would catch on but she did great and got the  leprechaun to his pot of gold. See? I told you they were doing St. Pat’s skills!

Language skills including counting syllables, digraphs, and rhyming. We spent one morning composing Limericks. She’s still getting the hang of it. She rhymes okay but puts them in the wrong place. Leprechauns would have a lot of un with her. She also picked up the idea of CVC words. She says things like suitcase and airplane for bag and jet. It’s hard to be ‘educated’ when you’re learning 3 letter words! We reviewed ending sounds which she studied last week. Apparently ABC order is still a struggle. We forget to look at ALL the words, sometimes.

The older one focused on pronouns, was introduced to prepositions and compound words. Review concepts included synonyms, antonyms, and homophones. She shaded shamrocks in different colors according to each concept. I thought it looked pretty fun. I wish my work was this easy. 😉 Adverbs were an addendum to her parts of speech. Another new concept was compound sentences. Coming on the heels of compound words, learning it was a snap. She reviewed irregular plural nouns as well. Want some bread? She knows it’s not ‘loafs!’ Idioms were a new one. I’m afraid she felt a little like an idiot, but hey, that’s what idioms do. Contractions were review, but I think she forgot.

She also did some multiplication and division for math. Rounding to the nearest hundred and thousand were also review skills. Since we learned fact families last week, we had some with 3-leaf clovers to reinforce the concept. Several word problem pages helped her get over the fear of them. I also had her do the same 3 balloon page as her sister, but add 2 of the balloons together and multiply by the third. This gave her practice in writing the equations.

St. Pat’s Skills- All Together Now

Both kids worked on sequencing with the book ‘There was an old lady who swallowed a clover.’ They worked on place values, coloring, and a word search just for fun! Inference was introduced with a page called ‘what’s in my pot’ that featured St. Pat’s themed items. They each had a Spanish page that spelled out ‘happy st. pat’s’ in espanol as well! One night at dinner we had a downloaded ‘would you rather’ page that had everyone in stitches. Nearly everything we had was a freebie from Teachers pay teachers. Go check it out. Can’t miss with them!