Weekly Wrap up of our home school week. This week we studied the planets. Even Pluto, the kids said we must! If I didn’t mention it, they did! This was for the week ending Feb 3rd! This week wrapped up our Outer Space/ Solar System Unit study that took a month. The first week we studied stars, then the Moon, the Earth and Sun, and finally the rest of the planets! We talked about aliens, went outside and looked at constellations, drew a lot of pictures, copied a lot of sayings about the celestial bodies and learned that we were wishing on Venus, all along! 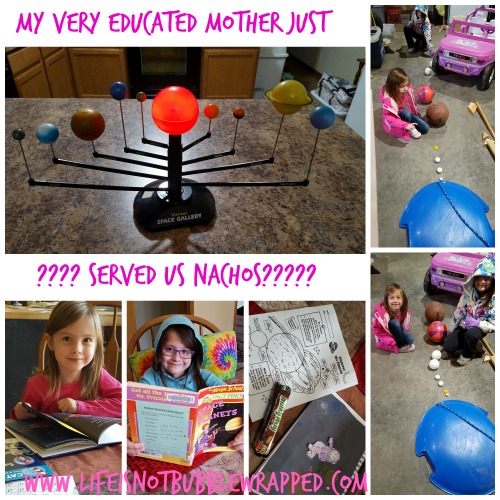 We also learned about the women of NASA. I hope that we can get them to watch Hidden Figures very soon. The information we got was very similar to that of the Hidden Figures story, and it should be interesting to see them SEE what the ‘old days’ were like. They already find thinking about things from that time period as ‘so strange’ so it should be informational in more than one way.
I think we saved the best for last! The kids read a ton of books about space travel, pretend space travel, shuttles, eating in space, and did some astronaut art. One of those was a space walk, and another a control panel for the ISS. I suspect there is less pink and bright colors on the ISS panels, though! We talked about ground hog day and how it relates to the seasons. It was a nice tie-in with the whole unit study. We also watched a few of the Magic School Bus videos that focus on the solar system! They laid out the solar system using different sized sports balls, both by size and in their position in the universe. They did a model solar system kit and rounded up the rest of their sticker and activity books!