This week (ending Jan. 20) we did a moon study! I came up with a clever way for the kids (and me, to be honest) to remember if the moon was waxing or waning. ‘Before the full moon it’s right, and after the full moon is what’s left.’ So before a full moon, it’s waxing UP on the right side and after the full moon, it’s diminishing on the left. So if you see just a tiny crescent moon on the left, you know it’s almost the new moon!  In our moon study we colored the cycle, carved it out in oreos as a snack, and later graphed the moon for a cycle when it wasn’t cloudy! 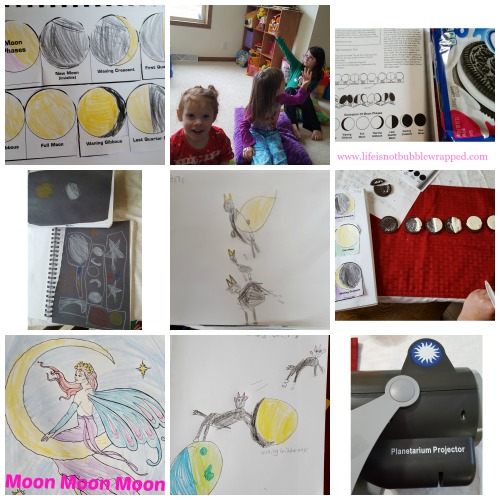 The kids enjoyed songs and rhymes about the moon, art featuring the cow from ‘hey diddle diddle’ and using their white crayons (for once!) to draw on black construction paper the moon in any stage. This allowed the 3 year old to at least get in on some of the action by learning the rhymes. We had done this with the star week and will with the sun, too! There are so many nursery rhymes and songs about the celestial bodies!

We took a pretend trip to the moon and they watched a Moon Base Unit section of a video from SCIENCE ‘The Essential Space Collection’ that we got from the library. We used the Planetarium Projector kit from the library system as well and it was a lot of fun! I couldn’t believe that this was something we could get for ‘free’ a.k.a. with tax dollars. Fantastic and would be expensive for a use only once every couple of years. It had a few disks that showed space walking, moons, galaxies, etc.  projected on our wall. It had a rotating bunch of stars as well, so if you wanted you could just let them play.

The kids did some 100 grids and age appropriate math that was star/galaxy themed. Each day they read moon themed books and learned some important points about the moon and how it relates to the sun, Earth, and, well, us! They had copywork and did a synonym space game as well as filling in their general sticker and space books (see resources). We had mom’s group Thursday and my oldest started a book group of sorts at the library. She had a great time and she knew several of the kids through sports. I think they had fun this week!