Here come the dino experts! They finished their Dinosaur Diggin’ Discovery workbook this week, and I have another one set up to go for next week! They drew some dinosaurs from a book showing step by step how to do so and used a dinosaur stamping kit to create skeletons, as well. We continued watching the Discovery video and added in some fun shows (see resources) to allow the toddler some exploratory time as well. 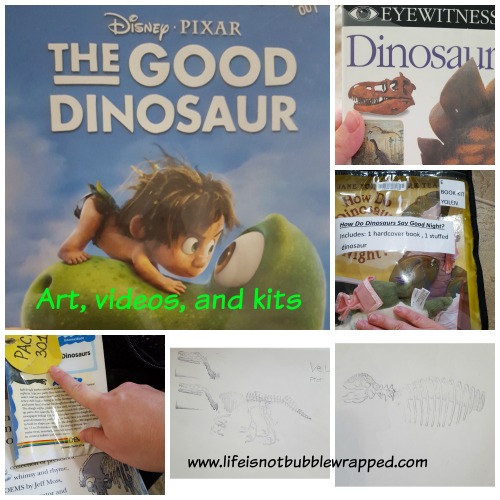 The other night, they played ‘name that dino’ a game suggested by the mailbox dinosaurs resource for TWO hours! We all had a great time and it left me feeling super impressed by my budding dino experts, that is for sure. Reading a lot of fun story books has been top on our to-do list as well. I think the ‘dinosaur vs. ____’ series is a great one for the pre-k set, but my kids are laughing none-the-less.

We also made fossil cookies. First we used fresh washed dinosaur feet from the dinosaur models to press into quick pouch dough. Next we baked them according to package directions. During baking, that the kids washed the dinosaurs. Last we studied the footprints and added some frosting from birthday cake that was leftover in the fridge to bury the footprints like fossils before eating them. Educational, and tasty, too!

Topical Books on Dinos and fossils
Books the kids are reading on their own, see their GoodReads Lists: K-1st/ 2nd-3rd
Dinosaur Memory card game
Dinosaur Diggin’ Discovery workbook for copywork (similar one found here) we got from $1 Target section
Discovery Essential Dinosaur Pack (DVD set-available nearly everywhere, we got it from the library)
The Good Dinosaur DVD from the library
Eyewitness Dinosaur VCR tape from the library
Show-Harry and his Bucket of Dinosaurs from Netflix
How do dinosaurs say goodnight kit with stuffed animal from library
Kit from library that has dinosaur stamps in it, most awesome kit ever!