Our kids, at least part of them are extinct. I mean sick. Sick dinosaurs. So sad. We had one day totally off and had a relaxed week otherwise. I let them take longer to get ready, let them read a lot, play math games on their tablets and took a slow week. The dinosaurs aren’t going to get any more dead, and rushing them with a house full of snotty tissues isn’t going to help anything.

I got a dinosaur book a couple of years ago that features brief information about dinosaurs, puzzles, and copywork. Basically trace and copy the name of the dinosaur. See resources below. I had my older child trace and then write in cursive and the younger one print both. They took turns reading the information and enjoyed the puzzles. They read some books and that was that. After a week of their dad being busy at work, then out of the country, and then super busy at work again, it was beyond my temper to try and force them to be ‘on’ for hours when we are all beyond stressed out. With sick dinosaurs.

Today was kind of an in-between day, we don’t normally force sit-down work on Fridays. Daddy surprised us by coming home early with pizza and we put in one of the 4 kits I picked up at the library, which was a DVD from Discovery (Channel) called ‘Essential Dinosaur Pack’ and watched the first episode, plus played the $1 memory game which consisted of Dinosaur playing cards. This was a fun reprisal of games earlier in the week. 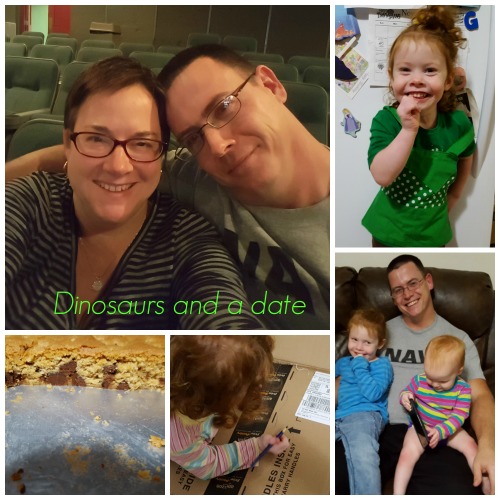 On the plus side, this came AFTER a whirlwind weekend that included a couple date. Not pregnant, no kids along. That hasn’t happened since.. 2009 I think. We had a date in 2011, but I was pregnant and that was to a movie. Then we went out to dinner last year but I was pregnant, as well. Obviously, this is a big deal. Details-we saw Fantastic Beasts and grabbed some pre-baked pizza on the way home, and someone picked up our pizza cost as a random act of kindness. 2 of our kids were with family and 2 we called in a last minute baby sitter for–and they napped through pretty much the whole thing so she just had to sit the house, really.

The next day we did some Christmas shopping and some once a year treats, like Bath and Body Works soaps and hand sanitizers for me. Whoo hoo. Yes, that’s a treat. Someone gave me a coupon at the check-out, too. I felt so blessed. We re-convened with some bonding time on Sunday. The kids started fighting the minute we showed up. Brilliant.. but, all given, it was great to have the weekend before our poor, sick dinosaurs try to become extinct. We had chili lava and fossil cookie bars (note the chipped fossils above) and the kids have eaten a ton of ‘dynobytes’ cereal. Marshmallow fossils. They have had a good time with the topic so far.

Topical Books on Dinos and fossils
Books the kids are reading on their own, see their GoodReads Lists: K-1st/ 2nd-3rd
Dinosaur Memory game
Discovery Essential Dinosaur Pack (DVD set-available nearly everywhere, we got it from the library)
Dinosaur Diggin’ Discovery workbook for copywork (similar one found here) we got from $1 Target section

Linking up with Weird Unsocialized Home Schoolers for their Weekly Wrap up. Click HERE for info/
to join!