This week we started talking about kid favorite–dinosaurs! We talked about the 9 plastic dinosaurs I found at the local megamart. We talked about how they are classified, why they were named as they were, where they lived, and so on! Focusing on three each day, using a dinosaur encyclopedia my K-1st child had taken out of the library on her own the week before! This is Thanksgiving week, so it’s a shorter week. We also just pulled a few books from the library shelves on dinosaurs, and my goal is to request everything else in the next couple of weeks for the kids. Some they read on their own and others we read over together. They also watched a Magic School Bus! This is going to be such a fun topic! 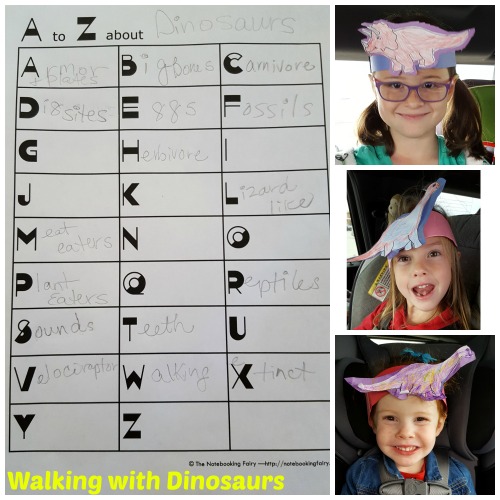 Art
Okay are you dying to know about the headbands? I  know you really want to know. First, we did a crayon resist by cutting out a dinosaur’s shape from a dinosaur curriculum book. Then we traced it on construction paper (a little larger than the cut out) and used the construction paper under the page in the art book. Finally, after they decorated those pages up, we pasted the 2 together and made headbands. Two art projects in one week-we hadn’t done any in a while!

Get this…they wore them to the megamart and asked people what their favorite dinosaur was. They were literally walking with dinosaurs. I’m such a genius. First the 2nd-3rd made the list and noted down potential answers. Next, they both asked people their favorite. Then on the way home we discussed statistics, sample size and bias (wearing a triceratops headband, she likely got an answer of that), and why a group of mostly adults might gravitate towards only a few answers. Likely, they only remember the fiercest or ‘coolest’ looking ones.

We ran into a grandmother who answered the question thoughtfully, smiled and said, you must be home schooling, and then said that she did and her daughter is, and that her grandson would LOVE to be out there with us. What a pleasant thing! It kept the kids occupied, they were more aware of other people, less bored and didn’t ask for a million things. Win! 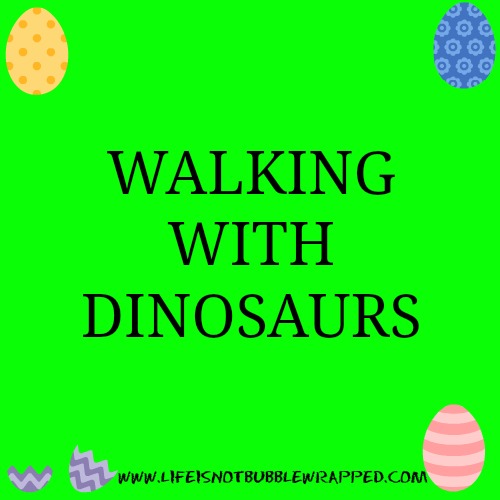 The kids hit their BOOK IT reading goals (12 books apiece) this week. The oldest accomplished it earlier in the month. Normally they would be done much faster, but then the 2nd kid read a large spider book (I mentioned last week) and it took FOREVER. I let her finish it, but then insisted that she read some more age-level books that would go faster. As soon as she finished that, she grabbed another big science book- on trees. She’s a great reader and learner, and if all she does is absorb it for a little bit, and she’s entertained and will have some background information about the world. We double win!

Copies from the Dinosaur Mailbox book
Topical Books on Dinos and fossils
Books the kids are reading on their own, see their Good Reads Lists: K-1st/ 2nd-3rd
A-Z Brainstorming list from the notebooking fairy
Magic School Bus Video “The Busasaurus”