2016 Election Too Close To Call

Right now. Nauseated. They’re saying 2016 Election Too Close To Call. The swing states are swinging. My friends abroad are terrified. Global stock markets are plummeting. Fear is everywhere. Fear is the word of the hour. I have no idea what is going to be happening with our library. It’s not on anyone’s radar and that in itself is of course, terrifying.

I hate feeling so out of control. I know that I did my part, I voted to keep our library open. Still. It’s terrifying. I have friends that think that elections are 100% already set. I have friends that believe every vote counts. But still it’s 2016 Election Too Close To Call and the broadcasters even look terrified on set. Exit polls show that almost 60% of people would be concerned if Trump became president, and 53% if Clinton does.

I’m raising 4 girls, I can’t pretend like everything is going to be hunky dory if the votes swing one way or the other. Sexism and rape culture are just way too prevalent and you guessed it, I’m terrified for their future. As states come in, my friend in South America posts ‘tense’.. repeatedly. His friends agree. My emigre friend can’t vote because her citizenship didn’t come in yet. Will she be deported, even though she’s legal? My 8 year old is frantically watching votes come in. She doesn’t understand. The 5 year old is reading a scientific book about spiders. No idea why, but I’m glad for her. I want to eat my feelings, but that wouldn’t be a good role model for the kids. 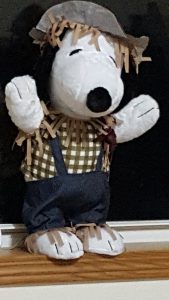 Here have a hug from Snoopy, you know you need one. If you need some comic relief, go head over to the Bloggess and read this. You can have a hug from her stuffed friend, instead. Ha. I’m going to read it now, and calm down.