We’ve been working with the kids on all things ‘life skills’– what skills do they need for their stage in life RIGHT NOW and that will be useful in the future? Because the kids range in age from newborn to 7, there’s always a new stage to focus on and new skill to be learned. For instance, that might mean some stage of potty learning (ex. an older child being independent taking care of all clean up) or a toddler learning to pull pants down. Basically we’ve slowed down everything I normally rush through and do for the kids and are working to get them as independent as possible. This would be a ‘Kindergarten’ year coming up for my 2nd child, and so this time before we worked on jacket zipping, shoe tying, etc. with the oldest, so we’re trying to give the 2nd, although she will likely be at home, the same freedom/responsibilities. Plus, it will make T-ball and Soccer MUCH easier if she at least attempts to tie her own shoes. 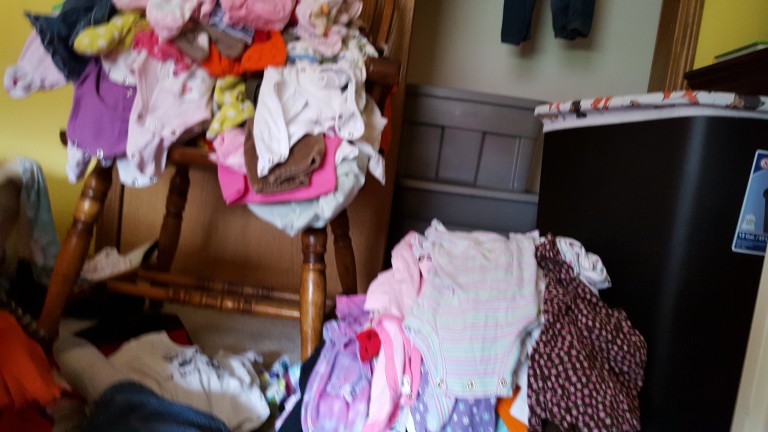 Seriously so many clothes to sort into sizes from newborn to 2 years!

It’s spring and that means time to move clothes around and sometimes that is upsetting to let clothes go when you’re growing out of them so we read a book about the voyage of a beloved dress that found new life. I’ve also been chatting with the 7 year old about emotional/physical health topics as she approaches the tween years. I shared the information in the text about teeth cleaning and eye exams with the 4 year old, but braved bras, shaving, and…the rest of it with the 7 year old. Here’s hoping I’m doing the right thing.

The kids had club on Monday, where they typically do art and some sort of memorization and bible study.

Tuesday we went and voted, played in the park and had take out pizza.

Thursday I let the kids watch PBS while the 7 yo and I completed the health book. One kid down, 3 to go. Whew!

Friday is usually an off day but they asked for some pages to color so I printed the ‘paper trail’ below for them to complete.
They also played with tablets. It really is hard to stop them from learning, even on an off day.

Paper Trail-
St. Pat’s Day Coloring by sight word for both and fill in missing number page for 4 yo
4 leaf clovers
Lucky for Literacy fill in vowel sounds and contractions for 7 year old