Week 2 in February for our home school was a bit of this and that because the holidays run together and how they are placed within the week. We started out by talking about the Chinese New Year.  We read a book about the Chinese New Year, and the kids did some listening about how the 12 year calendar was ‘named’, picked out what year their aunts/uncles/grandparents were born and tried to figure out if their character fit the animal traits or not, compared the USA New Year to Chinese New Year and later listened to their dad chat about how big a deal the CNY is because of people taking off and needing to travel, how difficult it is to travel, etc. He buys a lot of electronics parts from there and hasn’t been able to order because all the factory workers are gone 😀 Needless to say it was entertaining and of course they learned a bit about how holidays are treated differently just because of infrastructure differences. A few of the worksheets are listed  HERE. Since we are focusing on February holidays and learning about culture and the role that holidays play in various cultures, it was nice to have a few things for the kids schooling to make it fun. The kids played a game that allowed them to gain ‘coins’– best purchase ever was a simple pack of St. Patrick’s day gold ‘coins’– I use them for everything!– by landing on the animals of the Chinese New Year, etc. Basically a way to reinforce what they had learned about the envelopes of money kids get in China, etc. The four year old was able to practice game playing, turn taking, and counting. She later used this skill in her math for the week. Win! The kids also wrote out valentines for their ‘club mates’ at their church club. Good practice in spacing for the 4 year old and general hand writing and doing something nice for others for the 7 year old. They also drew a monkey scene for their art. I read off the description of how to draw a monkey to them (on our pinterest board) and then they filled in the rest! 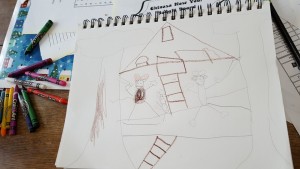 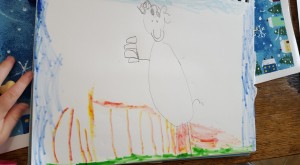 Tuesday we read 3 Valentine’s day holiday books. One of them was ‘There Was An Old Lady Who Swallowed A Rose’ and they had worksheets that went along with that. We also chatted about why Valentine’s day is celebrated, what cupid is, hearts are, what colors are associated with Valentine’s day, and why they’re not exclusive. One of my favorite books that I read to them is from my childhood, and these adorable characters make purple and green valentines (because it is their friend’s favorite color). They’ve been numming the sweet tart candy hearts their dad bought for the last couple of weeks as well. They each got a tiny box of conversation ones they can have for Valentine’s, too.

Because I’m struggling with some anxiety issues and life is in general pretty stressful right now, I gave the kids Wednesday off without warning. They read, colored, and wouldn’t you know it, they still learned some things along the way. They didn’t say a word or bat an eye. Actually the oldest thought I was pregnant. Lol. That WOULD be anxiety inducing. The other days they did fun worksheets where they colored by number (or addition/subtraction), colored by sight word, math pages on their level with heart themes, and so on. Check out our pinterest board for Valentine’s Day HERE, it has most of what they did. Since it was only a couple of days as they spent a lot of time on the Chinese new year, and they got a lot of holiday fun out of the pages they did do, I was not too worried that it was mostly ‘fun’ — Friday they went with us to the doctor. It felt kind of like a wasted day because what was supposed to get done didn’t happen, but I dealt with some of my anxiety issues by talking to my doctor, it’s been a rough 6 weeks and I really feel basically like a new person. So, yeah! We also did some grocery store running and the kids had some good social practice. If they come in with us, they are allowed to play in the doctor’s waiting room–but the rule is that they must leave it better than how they found it. They always do a good job of cleaning it up– I bet they are the most welcome kids there, lol–and they were even complimented by a total stranger to the doctor’s staff, who passed that along to us. Warm fuzzy!

I’ve been reading bible passages out loud for something for church, we’re getting behind, but it’s exhausting to read that much, I think we may listen to amazon streaming, at least for the Psalms, because it is really depressing. The high spots are where I notice church hymn lyrics– I was able to tie in one of them to celebrating Martin Luther King Jr. holiday last month ‘I shall not be moved’… awesome! I want our kids to recognize that their religion can cross into the social realm in a positive way. However, I didn’t focus on that aspect during ‘school hours’ it’s casually mentioned during the readings at night. I still want their education to be separate from their religion, even if they inform each other. Don’t ask, it’s hard to explain. It was a light week but President’s Day is next and we’re going to tackle MONEY for the rest of the month along with that. Woohoo. Now for the nitty gritty– our paperwork proof is basically up in the pinterest boards, but here’s our books for the week: