This week we started off with a couple of items for the paper trail (below), plus a discussion of St. Nicholas/Santa Claus. Every year I have had the same discussion with my now 7 year old, and the younger ones listen. Always the same even tone of voice, same talking of ‘St. Nicholas was a real person and the beginning of Santa and gifted women with dowries’…etc. I typically open a website of any random variety on the subject and use it as a talking basis. I add in our religious beliefs and the ‘reason for the season’ and why we give/get presents and so on. Let’s face it, you’re probably not here to hear that, if you are, leave a comment!

They’ve also been working on completing their ‘Brainzy’ profiles on the tablet this week. I have been using education.com for a lot of free worksheets for years, and have downloaded quite a bit now that I have a paid account as well. I won a free year of the game portion called BRAINZY, and the kids have really enjoyed it. From reading books to them and asking questions to geometry, addition, and more, it’s a safe, kid-friendly way for tablet time where you’re assured they’re learning something! It makes them keep trying until they get a certain percentage right, so you know they’re correcting their mistakes. Games such as counting unusual items to add to pizza, knocking down buildings by hitting certain numbers that are called out, and more help build basic math skills. They have a ton of fun and don’t even realize they are learning! Our subscription is up in January, so I’m hoping the older one will focus a little bit on completing all the options, it is harder for the 4 year old, so I’m not too worried about her learning ‘all’ the skills before the year is up. It WAS free after all. They have fairly limited tablet time and they didn’t use it a lot this summer and fall. I wish now that I would have devoted a certain day or time to it and helped the 4 year old go through it systematically, but we focused a lot on other ‘fun’ things while I was pregnant and could devote more hands on time. It’s harder with a newborn and a toddler running around to sit and read out loud and other things that I did a lot more of this fall.

I need to award (hand) my daughter her November BOOK IT! Award as with a baby new, I forgot to do it when the month changed over, she of course blew it out of the water with about 40-ish chapter books read, and she has met her 20 book goal for December already as well, but I won’t award that until she ends the month, of course! She’s also been focusing a lot on drawing and wanting to write stories and things that she can do on her own. I’m trying to celebrate that independence as much as possible. We’ve had an art kit about drawing out of the library since we worked on fashion earlier and FINALLY she’s getting around to using it! Again, it gives her something to focus on while everyone else is sleeping or what have you, and it will help her art skills grow, which is great! 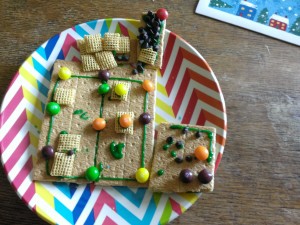 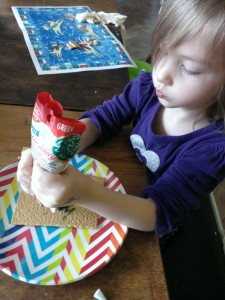 Hands on:
For their ‘snack’ this week, they did ‘gingerbread houses’. Basically frosting and graham crackers, but they loved it! We said we’d do more detailed ones once dad was home for the holidays.

We also sorted out the ornaments and hung them on the tree. Why is this schooling? What’s more important than tradition, and what’s more traditional than making ornaments in grade school? I’ve got you there, don’t I? While we didn’t *make* any this year, sometimes just appreciating what you’ve done and looking back on memories made is just as important. We talk about why some items were picked out each year (reading when K was 3, Eeyore tangled in lights for C last year, the corn popper when B was learning to walk)… and as they grow, talking about why they pick out their own and how it defines their year. It will be a memory for years to come, as they move to their own places with their own ornaments, hopefully they recall what each one means and how they developed as people each year.

Media:
ELF!
Dolly Parton’s Coat of Many Colors (my 7 year old watched this with me, and it was GREAT fodder for discussion- this is filed under ‘health’!
Prep and Landing and Prep and Landing Naughty Vs. Nice

Paper Trail:
The 4 year old did a Nativity packet from Mama’s Learning Corner and the 7 year old did some education.com winter math worksheets-they were fairly easy (1st grade level) but she needs the practice as she seems to add more slowly than I’d like when it comes to ‘bigger problems’.  She did an adjectives of Santa as well-3rd grade level. They also did some ‘roll and colors‘ and some ‘100 grids’– always a big hit no matter what grade!

Linking up with Weird Unsocialized Home schoolers for their Weekly Wrap up, full details to play along here: WWU