Overall my kids are transitioning between summer/school and fall/school fairly well. August is the great divide. They took the first week I intended for them to work and went to a summer ‘bible camp’ in town. Crafts, singing, you name it. Plus they fed them lunch. Score! Although we’re doing some workbook stuff to get us into things again and focus on specific skills that are too hard to manufacture or look up online all the time, we’re breaking with some fun stuff, too.

We took a day to do some ocean worksheets (pre-K to K level) from 1+1+1=1 website on ‘Octonauts’– an ocean TV show. It was a nice break and they had fun with them! I try to record every book, but a few got back to the library without my writing them down, and we take out so many it’s impossible to keep up.

Here’s a list of all our Ocean Themed Snacks (including links or pins!)

We also worked from a book I found in the library on recognizing, coloring, etc. sea turtles. My oldest did a worksheet of facts as well as the coloring and both kids did a math worksheet based on turtle egg laying and how many survive. They numbered random spots to 100 from an education.com worksheet and crossed out the eggs that didn’t make it. While we went along, my oldest did the subtraction (she counted the lines of 10 that are left, etc.) to see how many would make it and my 3 year old just enjoyed drawing turtles on the eggs that were left.  We had a turtle snack. 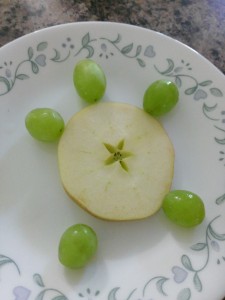 6 year old: She’s got a 2nd grade workbook, plus a few more $1 target books to slowly eek her back into things. She’s taking on things like rhyming, addition/subtraction, reviewing beginning and ending sounds, blends, and a lot of other skills. She’s excited about learning cursive later.

3-4 year old: She’s got a pre-K workbook, and number/coloring $1 target books. She’s recognizing a few color words now which should make things like coloring by number a LOT easier. I think she’s learned to read some, but is acting like she can’t! Things in her books are same/different, following instructions, which thing doesn’t belong, tracing the alphabet, etc.

The 3/soon to be 4 yo is practicing writing her name, mom and dad, etc. and the 6 year old is taking on different topics that I come up with to get her into writing sentences and using her imagination (best thing about summer, etc). I plan on getting her to do some sight words as well to up her confidence in writing.

The kids also both are sending a card to a church member who isn’t well. The 6 year old addressed the envelope and did all the artwork, the 3 year old just did artwork and wrote the person’s name and her name on the inside of the card. They sent a miss you card to their former babysitter.

Little Chick’s Easter Surprise by Backstein
Pigs in the Pantry Fun with Math and Cooking by Axelrod
Snowmen at Christmas by Buehner
James goes buzz, buzz by Awdry
The Mother Goose Book by Barbaresi
The Completed Hickory Dickory Dock by Aylesworth
A Perfect Father’s Day by Bunting
The Midnight Ride of Thomas the Tank Engine by Awdry
Leaves and Off the Rails (double book) by Awdry
The Gingerbread Man by Aytesworth
New Tracks for Thomas by Awdry
Thomas and the Treasure (and other stories) by Awdry
Happy Birthday Thomas by Awdry
Catch Me, Catch Me! by Awdry
Little Engines Can do BIG Things by Awdry
Goldilocks and the Three Bears by Aylesworth
Snowmen at Night by Buehner
Barnyard Dance by Boynton
Cleo Cooperates by Bridwell
A fish in his pocket by Cazet
Animals ont eh Farm by BRIMAX
ABC I like me! by Carlson
I like me! by Carlson
Clifford TBRD Glow in the Dark Halloween by Bridwell
Big Bird’s Reb Book by Cerf
Christmas Angel Clifford by Bridwell
White Rabbit’s Color book by Baker
Puppies Puppies Puppies by Meyers
Lemonade with a Twist by Banks
Use your words by Berk
Percy the Small Engine by Awdry
My friend is sad by Willems
Scaredy Squirrel at the Beach by Watt

Wish for a Fish All About Sea Creatures by Worth Cat in Hat Learning Library
Mister Seahorse by Carle
-Ocean KIT: Baby Shark
Thomas and the Shark by Awdry
Clark the Shark Tooth Trouble by Hale
Three Little Fish and the Big Bad Shark by Geist
Hark a Shark by Worth (Cat in the Hat)– the kids had already read this so we skipped it
Never Take a Shark to the Dentist by Barrett
Little Shark Finger Puppet Book (board book) by chronicle books
Shark Puppet– we ALL loved this!
Under the Sea by Milbourne
Moonlight Ocean by Golding
Curious George Discovers the Ocean by Freitas

Math Book:
Pigs in the Pantry Fun with Math and Cooking by Axelrod

We also watched ‘Big Blue Live’ the first one with all the ocean stuff and plan on finishing the other 2. Dad and I were just as enthralled if not more so than the kids!