Let’s stop for a moment and pretend we find out that your best friend, acquaintance, sibling, etc. is pregnant. What’s the first thing you say?

If it’s not ‘congratulations’ you’re screwing up the conversation already. If your first thought is either:

a. how many other kids they have and if it’s too many or not

b. the gender of said kids and if they have ‘both’ and are ‘done’

Let’s face it, the world is not equal. But judging whether a child is worthy or not based on his/her siblings and place in their family according to their genitalia, while they are still safely cushioned inside their mother’s womb? That’s a pretty low blow.

We’ve always kept our pregnancies secret until they reach the 12+ week mark. That takes away a lot of issues of miscarriage that typically happen before the first trimester ends and keeps you from having to answer a bunch of awful questions if such a thing were to happen. Believe me, I know. After that, if an announcement is made, or, well, anyone looks at me, the first question we are ALWAYS asked even before congratulations are given is: ‘do you know what it is..?’ We typically respond with: ‘it’s a puppy.’ It always gets a laugh. When they clarify, we usually respond with some variation of ‘it’s a surprise.’ What I’d like to know is why is the physical sex characteristic of my child so important to even strangers? Way to get personal random lady in aisle 5. I figure if someone wants to offer up their information to me, they will. If they don’t, they won’t. I have one friend who likes to discuss baby names. So I ask so I know what names to think about. She enjoys traditional names, so there’s no ‘neutral’  in there.

Call me crazy, but unless you’re a close personal friend with whom I share confidences, or an acquaintance with whom I share information for baby related reasons, I probably don’t care to tell you if my child is a boy or a girl physically. Here’s why: well, number one it’s fun to hear what old wives tales people come up with from how a woman is carrying to what she wants to eat, and how that might translate to sex. Here’s a hint, your pregnancies can be different as night and day and you can still have children all born with the same chromosome pairing. Number two, the person who now has said information will take everything you say about that little nugget of squish inside you and translate common stereotypes onto a child who can’t even breathe on its own. Moving a lot? Going to be a football star (but only if it’s a boy). If it’s a girl? Ballet. Totally. Seriously? The world isn’t divided into football stars and ballet dancers. There are writers, artists, grease monkeys, computer geeks, literature fanatics, and the list goes on and on. By the time a child reaches 18, almost none of them are segregated into football and ballet. Their individual talents have proven themselves and new labels, chosen or inherited, are woven into the fabric of their lives. 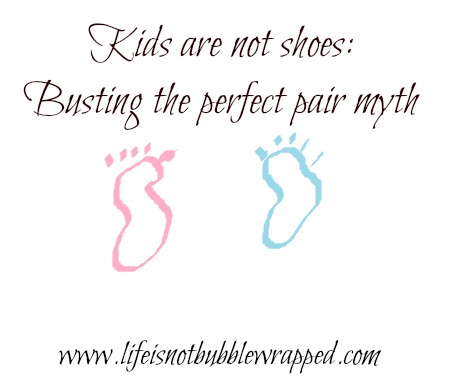 So why the focus on sex (most people say ‘gender’ when they mean sex-but gender can be completely opposite of sex, and we don’t need a professional athlete to prove that to us) before birth? There’s some stigma in American society that didn’t apply during the post-War era. Panic about world population growth, a focus on dual careers (and spiking day care costs with each child), and a sense of ‘fair’ have evolved what was a 0-10 child/parent ratio into a dichotomy. If you don’t have one boy and one girl, you must have done something wrong. Either you should stop having kids because more than two of a sex is seen as inappropriate, or people think you should just ‘keep trying’ until you get that coveted ‘insert sex here.’ What’s wrong with this thinking is that we’re trying to pigeonhole parents into a 1:1 ratio when in reality, it’s only in the long run that a coin toss comes up 50/50. You could try 12 times and always land on heads, but if you try 24 times,  you are more likely to get a more even ratio of heads/tails. So this ‘gender’ rationing is completely irrational and illogical. All it takes is a coin toss to disprove the notion of a  ‘perfect pair’, as if kids were shoes.

We have three girls already. We know that in the long run, it’s about a 6% chance that we would have 4 girls. It’s more likely that we’d have a boy. But each pregnancy is literally a coin toss. Forget the box of chocolates, with kids, you never DO know what you’re going to get. With each subsequent pregnancy and birth, the questions have gotten sharper. People are downright exasperated that we haven’t managed to have a boy yet. Old women frown at me and pat my shoulder and shake their heads as if I’m a disgrace. As if my girls are not worth every bit as much as a boy. As if their desire for us to conceive a child with XY chromosomes can override nature. Not likely. What I think they fail to realize is that it doesn’t matter to us. We’re not trying to reach some absurd standard of perfect in anyone else’s eyes. Our children are our children. We don’t tell the girls that they can’t do XYZ because they’re NOT XY. We tell them they can try out for whatever sport they want, activity they want, and are only limited by time. My oldest likes Lego Nijago and Transformers, just as well as princesses and ponies. The middle one’s favorite color is blue and she’s just as happy going to bed in only a pair of pants, shirts are ‘too hot’ in the summer. They both adore playing in the dirt. A salesman recently tried to sell me on the notion that his grandkids being boys are just the dirtiest things out there. I told him he should try sweeping my house some day. It’s not all tea parties and glitter, folks.

In this day and age, even worrying about a child’s future ‘gender’ is pointless. Eventually all those things become clear. For most, their sex characteristics line up with their social gender identity. For a few, they don’t. You don’t have to go further than today’s headlines to know what I mean. Let’s stop assigning good and bad to a pregnancy based on the chromosomes contained within the womb. Let’s stop assuming that other people’s pregnancies are a cause for concern for ourselves–certain that random church lady or whoever is not going to live long enough to see if I really have a footballer or ballet dancer on my hands. Heck, maybe my girls will play football. Who knows?

What I do know is that it’s time to stop the inanity of ‘boy vs. girl’.. especially to a stranger. What exactly is that netting you? If you’re a relative or close friend, it likely only gets you a few weeks to buy a present that you’re going to go out and buy once the child is born anyway, because let’s face it, you’re going to put it off until then. Moms (and dads) of 2+ same sexed kids are tired of hearing it already. They’re tired of the dirty looks. They’re tired of the judgement put on them as their family grows from 2 to 3, 4, 5, 6, or more. They’re tired of the constant tut tutting and head shaking and ‘poor dears’… no, I’m not a poor dear because I have 3 intelligent, beautiful, independent, self-confident daughters. I’m doing a damn good job. Except on those days when I insist on pesky rules for behavior. Then I’m the worst mommy ever. You can ask them, they’ll tell you. I won’t be a better mom because I have a boy. I won’t be a worse mom because I have another girl. It won’t change anything at ALL. Because I don’t parent based on whether my child has an ‘innie’ or an ‘outie’ in a private place. I parent based on my own values, which have nothing to do with chromosomes, and everything to do with raising children to love everyone, regardless.