Time just literally flies. She’s been crawling since she was tiny and started walking right after her birthday. She’s hitting milestones about 2 months before her sisters. Trying to keep up. She’s still tipping the scales and height charts, actually outlasting her sisters- at this age they started dropping off the charts, so we’ll see how she does coming up, but for now, she’s heavy, she’s tall, and she’s got spunk. She has started sleeping through the night, I think when her mouth doesn’t hurt. If it does, forget it, she’s up and wants me. 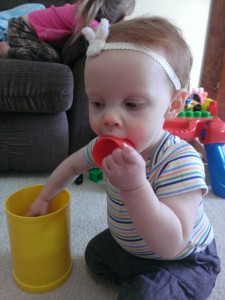 Words: mom, dad, more, bear, ball, wash, please, drink (sounds like duh), mm!, book, door, hair, tickle, tuck, love (wuv), boks like a chicken and wobbles bent arms, oinks like a pig, bowl (this is anything food goes in), five (high five anyone?), diaper, signs thank you and blows kisses. Shakes head for no and giggles and smiles for yes.

She’s obsessed with her hair and eyelashes when she nurses. This month she has slowly dropped off nursing in the middle of the day. She’s gotten more used to drinking cow’s milk out of a glass. There’s pretty much no food that is out of bounds, although we don’t give her peanut butter or honey (too thick and not recommended because of botulism until age 2)– but she’s tasted peanut butter and has had it in candy (yes candy) several times before. She has 8 teeth and chews on everything. She enjoys swinging, playing pat-a-cake, ‘dancing’ when we sing or play music for her, and must absolutely have all the blinds pulled open so she can see out the living room windows and the dining room doors- she wants a full view, thank you very much.

She knows everything. When I said she was meeting milestones ahead of her sisters, I swear she knows exactly what you’re talking about. I told her that we needed to go wash her hands, and she toddled right over to the bathroom, and was climbing up on the stool in front of the sink before I could even make it to the bathroom. I had only washed her hands at the sink twice before that over the last few weeks. Normally I just use a washcloth. She attempts to wipe up the floor for a spill. She has started picking up toys and putting them away. She has literally loved her ‘very hungry caterpillar’ book to death. It’s in 3 pieces now. I need a kid-proof version, the poor book-if I tell her to get that book, she’ll get it and bring it to me and wait for me to pick her up so she can sit on my lap to read.  She points at her diaper if it’s wet and needs changing. She’ll go and lay down to get a new one, and shakes her head no if I don’t pick one that she wants. She will put her glass back on her high chair when she’s done drinking between meals. She tries to blow her nose and helps us get her clothes on (for a LONG time.) She waits for you to bless her after she sneezes. Expectantly. She tries to help buckle her car seat now. She laughs at strange noises, and knows if anything is out of place or seems ‘wrong’ and points it out.

The most hilarious thing is that she’s gone past the ‘inspects the floor’ stage and now she just sees something on the floor, points at it, and looks at me. Clearly she’s saying ‘mom you need to sweep…. NOW’… if I tell her okay, but don’t go pick it up or get a broom, she does it again. And again. The bossypants. She enjoys trying to drink out of our coffee and tea mugs, knows that outside means go get your coat and shoes, and attempts to steal everyone’s shoes. Yes, another kid that wants to eat footwear. Sigh. She points and grunts at things that she wants, too. With a smile. Oftentimes, she’ll wait and see if you give her permission to do whatever it is. She also RUNS when she knows she’s not supposed to do something. Giggling madly along the way. Gate to the stairs left open? Onset of giggles and thumping footsteps to try and get by with climbing the stairs. She will play by herself but she mostly wants to be held if the other kids are busy. If they’re playing, she’s playing. If they’re doing schoolwork, she wants me to hold her. The snot. Oh and the temper tantrums. From even before she was a year. She’d scream and cry if you closed the gate on her. Not sad. ANGRY. It’s kind of hard not to laugh. But I manage. She doesn’t like to be told no and as of late will throw herself down and waaah. Again, funny, but not.

Daddy has become the go to guy recently. She notices that he’s gone and RUNS to him when he gets home. When my folks visited last month, she went to each of them and sat quietly, it’s been a cold and snowy winter, so we haven’t seen family much. I went to the library yesterday by myself and when I came back she started clapping. I went to an event with K last week and my husband said that after a while, she would point to my spot on the couch and look at him and make a concerned noise. Again and again. So I guess I’m not chopped liver, but it’s fun that after all this time she’s finally loving on him with equal gusto! When he’s home, he’s her place to be!

Her favorite things are stuffed animals (giant caterpillar, glowworm, Piglet, Eeyore, Harmony care bear, chicken, fox, magic bear), her hungry caterpillar book, the touch and feel animal books, and the kids’ fuzzy pillows. She rolls on those pillows. She also LOVES her sisters’ fav toys if they bring them downstairs, she cuddles them (pooh and pig).  She wants any book or magazine she can get her hands on and wants to play with bowls, cups, from the cabinets, and so on.  Baths are awesome. She likes yogurt and applesauce, scrambled eggs, bread any way she can get it, fruit, and the other day she just mowed through taco meat and cheese. Anything mom is eating? She wants. But she’ll shake her head if she’s had enough.