Friday:
Reading Together:
Chad the allergic chipmunk by Smith, Nicole S.
The meat and beans group by Schuh
Mystery at the Club Sandwich by Cushman
Both kids also did their BRAINZY accounts over the weekend.
Weekend:
Since we talked briefly about Chinese new year (and it was my husband’s birthday, and he loves Asian cuisine)– we went to the city and ate at a ‘Chinese buffet’. It’s really much more than that, with a chocolate fountain, Mongolian BBQ station, plus Americanized foods, ice cream, and so on– everyone can eat there, and it’s not much for the kids. Despite the kids saying they *love* sushi although they’d never had it, they still turned up their noses at it. Ha. Oh well, they had the experience, and even though they ate Americanized foods, they got to try chopsticks, had a fortune cookie, and we all got a much needed ‘out’ before… it snowed… AGAIN.

Which meant more playing in the snow.

Both kids celebrated the end of their grains group by making a baker’s hat craft. 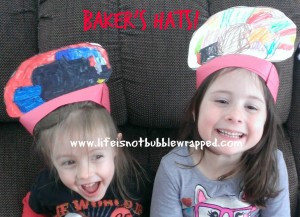 We learned about grains!

We had family game night and played a kids’ trivia game, and then I played connect 4 and the picnic basket game with the kids (very easy game pulled from High 5 magazine).
6 yr old Independent Reading:
The Wind in the Willows by Grahame
Judy Moody Saves The World by McDonald
Judy Moody by McDonald
The Dollhouse Magic by McDonough
The Amazing Day of Abby Hayes The Declaration of Independence by Mazer

We took a break from our unit study on Monday and celebrated Seuss (although I still made them do work, it was Seuss based work!) I’m listing the books here instead of there for ease.

Most of their Monday stuff is listed in the link above, but they also…..

Calendar for March: Introduced Lion/Lamb- we decided it definitely came in like a lion. 6 year old wrote in the numbers for every day on the calendar and answered the questions. I may have the 3 year old write each number on the day as we go, or a week at a time.

Completed a maze to get the lion to the lamb.

Independent Reading:
Jigsaw Jones Mystery: The Case of the Kidnapped Candy by Preller
The Littles by Peterson
Judy Moody, MD by McDonald

Colored Q for queen and U for umbrella color by number sheets
Matched sets of cards with the name of a shape on one, and the shape and name on the other (so she matched the words.) She had to do this face up, but I was still impressed.

Sign language letters V and W
5 senses oral worksheet- 5 things I see, smell, taste, hear and touch ‘in my house’…. we have a baby, just imagine the fun!

Music: Jesus Loves the Little Children, Somewhere over the rainbow (listening to 2 different versions), and On top of spaghetti

Reading Together:
Peanut by Selsam — this was a really awesome 1960’s photograph book, very detailed for the era– a must see for young kids. Black and white photos!
Store Sparkle Fun book (food groups)
The Magic School Bus Gets Baked in a Cake by Cole (this was mostly for the 3 year old)

With her I’m trying to combine basic skills with fun themes to try and motivate her to speed through things a little faster. We’re almost done with the alphabet (she’s been learning 2 letters a week roughly) so I want to get her used to thematic stuff again. She does some of the ‘food’ oriented stuff with nutrition, but it’s more about listening with her, and she needs to work on basic skills more than anything. I decided to combine the rainbow themed tot pack and Pre-K pack from 1+1+1=1 website. I’ve pulled from there before and really like it. We’ve talked about eating a rainbow and we’ll be doing more with fruits and veggies soon, so it goes together without being too matchy matchy.
From the Rainbow pack: Art, math, alphabet, fine motor skills, and music
Colored a rainbow picture
tracing lines, tracing upper case alphabet, tracing shapes, and color recognition, went over the colors of the rainbow and sang the rainbow song from Sid the Science Kid

Math: Food themed numeral 11 and 12 trace and write, and count the food pictures
Calendar: Writing the first 3 numbers to indicate the days.
Letters: V and W tracing and completing the education.com worksheets with dry erase,
Recognizing the letters we are working on and ones coming up

6 yr old:
Independent Reading:
The Magic School Bus Gets Baked in a Cake by Cole
Art: Colored a rainbow picture (she wanted in on her little sister’s fun, of course!), colored last valentine page
Reviewed calendar so she could know what day and date (to practice writing the date on papers)
Spelling: same words from Monday (spelled beans- beanes– but this was probably for attention as she did them fine yesterday except ‘Qwail’ <– not surprised)
Language:
Syllables worksheet themed in spring- she did really well at this and after explaining it, she did not need any help and got them all right.
Verbs worksheet- underline and then write on provided lines (Yummy Verbs from Collaboration cuties from TPT site)
Adjectives worksheet- underline 3 adj in each sentence (this was hard for me in some cases, and I’m not an idiot- perhaps the sentences were constructed oddly or it’s just been too long for me, either way she did get most of them herself and for never knowing the topic before, she did well. It also asks you to use 3 provided adj. in a sentence and she did that without complaint!Math:
Reviewed fractions and discussed the sizes 1, 1/2, 1/3, 1/4, 1/5, 1/6, 1/8, 1/10, 1/12. Reviewed a sheet that asked if you were hungry would you eat this fraction or this fraction of pizza.
Reviewed telling time on a clock (hours and 1/2 hours). Introduced 1/4 til and 1/4 after. Needs more work.
Wednesday:
6 year old:
Reviewed calendar
Spelling words– this time she misspelled peanuts and beans, and added capital letters, I think she was just being lazy
Writing a menu for a day
Writing a grocery list — I used this as something to keep her occupied while we did a HUGE grocery shop, and she had a lot fewer issues with being ‘bored.’
Math:
Started a ‘Fair Shares’ Symmetry/Shapes packet featuring 1/4 and 1/2 (did first 5 pages and gave 2 more of the pages to sister for her to see 1/2 and 1/4 in her packet)
Continued learning about 1/4 to and after on the clock and practiced writing in times with dry erase.
Language:
Sort antonym cards into pairs and then writing the pairs on a worksheet Lotsa Luck St. Patrick’s Day Literacy and Math FREEBIE from Lisa Mattes at Growing Firsties TPT (will do math section tomorrow)
Sort simple word cards into short VOWEL sounds and then record on a worksheet
6 yr old Independent Reading:
Kayla the Pottery Fairy by Meadows
Libby the Writing Fairy by Meadows
Annabelle the Drawing Fairy by Meadows
3 year old:
Feelings Shamrocks (they have different expressions on their ‘faces’- too cute!)
Math:
Reviewed 1/4 and 1/2 briefly with her just so she could see.
Traced and wrote numbers 13 and 14 and counted up to that number on number tracing worksheets
Counted from RAINBOW pack and circled the correct number of children pictured (2 pages)Alphabet:
Traced lower case
Recognized V and W as letters of the week
Traced V and W letter worksheets
Drew #4 on calendar
Orally reviewed ending sound worksheets
Thursday:
Reading Together:
The Peanut: A nutty tale about sharing
Learned about Momofuku Ando and had an ‘instant noodle’ lunchtime feast featuring cup’o noodles! biography info from time.com online magazine!
3 year old:
wrote in correct letters on ending sound worksheets- I had to do this orally with her again, she still doesn’t seem to understand, but it’s a Kindergarten level worksheet.
Wrote numbers 5-8 on calendar
Traced lower case numbers
Traced V and W after recognizing them.
Tracing 15 and 16 numbers worksheet and counted them out loud.
6 year old:
Finished ‘Fair Shares’ Symmetry/Shapes packet featuring 1/4 and 1/2
Lucky subtraction share worksheet (match pairs of simple subtraction problems and write them as equal to each other)
Luck of the Irish adding 3 numbers worksheet (write and solve the problems adding 3 #s)
Independent Reading:
Zadie the Sewing Fairy by Meadows
Josie the Jewelry Fairy by Meadows
Violet the Painting Fairy by Meadows
Fake Snakes and Weird Wizards by Winkler
Stop that Frog by Winkler
Linking up with the Weekly Wrap Up