FRIDAY:
Normally we don’t strictly do any homeschooling on Fridays, as my kids are 3 and 6 and are well advanced for their ages, I don’t find it necessary and I need a break from time to time to get some other things done, focus on the youngest not destroying the house, etc. But we were having company and I thought it might be nice to have them engaged in something in the morning while I cleaned. No dry erase markers, no pencils, no crayons. Just food!

The first thing we did was something I’m naming the toast project. It involved the combination of the human body and the nutrition units to compare bread to toast using the 5 senses. Pretty awesome. Then we compared red and green apples, discussing what they would look like on the inside before cutting them open, then talking about the taste, and finally comparing what happens to fruit when you bake it versus bread when you toast it. Plus how we could use our senses to know that food was bad.

I also took the opportunity while cleaning to discuss how we knew what was food, what was NOT food, and how we know the difference (using our 5 senses- or hopefully 4 and NOT tasting) and our memory of where food is kept to remind them to keep out of medicines, cleaning products, etc. for health and safety. It led to a discussion on what would happen if the baby was left alone with the kids and she got hungry. I told them to call another adult, although really, how often do you think we’re going to be leaving the 3 and 6 year old together with the toddler? We talked about places to find phone numbers, although really, it’s so unlikely as to be laughable, it seemed important to the 6 year old, so.. there you have it. I’m listing this under health and community resources.

When I was recording items from last week, I noticed that one of the videos we didn’t get through all the time on it, and found a bonus feature which was like a mini-movie that talked about kids cooking, showed making ice cream, cutting snacks into shapes, and also making pizzas. So they watched that Friday morning, as well. Guess what they wanted to make for lunch? Since we were having company, the kids got their little aprons, washed their hands, and helped make pizza for them. The oldest helped stir one bowl of dough, knead and roll out, as well as top the pizzas and put things away, add stuff to sauce, etc. The 3 year old got to help roll and top the pizzas, and put a LOT of ingredients in her mouth. They were delighted to have what they made fed to someone else and it put a little ‘check’ in the box that I wanted to get done that week, and that was to get the kids involved in making a ‘grain’ product, and the dough was it! 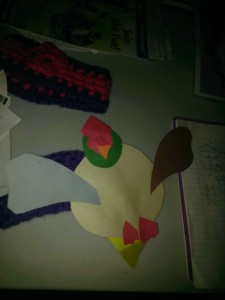 valentine bird made from hearts

Art: Valentine bird (see picture)
Math: Graphed heart candy by color and saying
Independent reading:
Who Stole the Wizard of Oz by Avi
Ready Freddy the King of Show and Tell by Klein
Scooby Doo  Map in the Mystery Machine by Herman
Garfield and the Mysterious Mummy by Kraft
Garfield and the Beast in the Basement by Kraft
A Little Princess by Burnett

The snow hit Sunday night and really put a damper on getting any more library books, so I had to string it out a little bit until we could get back in there (closed for inclement weather). At the same time I had computer troubles and we still had internet and printer issues, so we’re working with what we have pre-printed and not starting ‘new’ worksheets.

Art: Snow painting- aka glue and shaving foam (see pictures)
Engineering: aka snow fort
PE: sledding, deep snow walking, etc.
Snow-day TO DO lists (written or drawn)
Math: Estimating and measuring the amount of snow with a yardstick (around 8 inches, by the way) 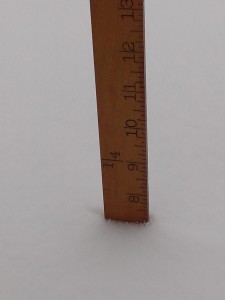 not done yet!-before the kids woke up

Reading Together:
Oodles of noodles by Hendry
Freddie’s spaghetti by Doyle
More spaghetti, I say! by Gelman

Multimedia: Despereaux (technically this wasn’t part of the plan, but it did revolve heavily around soup, food making people and animals happy, healthy, and etc)…so I’m counting it! 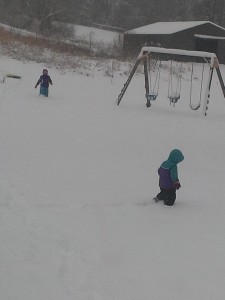 Tuesday
Reading Together:
Gino Badino by Engel
Bread, rice, and pasta by Martineau

Multimedia:
Math: Episodes of Peg + Cat– to differentiate for the 6 year old (although it IS age appropriate technically), I had her guess certain things that required division/multiplication, and she did fairly well (example: 16 pieces of fruit to separate into bowls for 4 hungry pirates, how much fruit does each pirate get?– she answered correctly nearly instantly, yeah!)
Spelling: Super Why

Wednesday
Reading Together:
The Pizza Book by Krensky

Reading: A recipe, discussed measuring, more and less, time, heating the oven, etc.
Independent Reading: All Because of a Cup of Coffee by Geronimo Stilton (oral report)
Color by sight word
Writing:
Create a bakery menu (writing, pricing, slogan, what’s sold at a bakery)
A-Z Foods in Cloudy with a Chance of Meatballs

Independent Reading:
The Curse of the Cheese Pyramid by Geronimo Stilton
Junie B Jones is a Beauty Shop Guy by Park
June B Jones is a Party Animal by Park

To find out more about why I’m posting, view other people’s topics, or participate in the WWU, click here: Weekly Wrap Up!