At first there just was e-mail. It was really slow. I could connect with friends, and they’d write back, chat daily with little programs, before real life set in. Then jobs got in the way, we moved apart and never were quite the same. E-mails exchanged more slowly now, a reply every now and then. Facebook showed up and we could connect with lightning speed once more. We shared jokes, old stories, and then times and lives changed, once again.

Wedding bells rang, and babies were born, hurray! But exhaustion and friends branching out, left me in the cold. They had new best friends who came to visit, or families near-by. Always running here or there, no time left for much but ‘hi’. E-mails left un-replied and time drug on and on. I wrote a blog, hoping to have some contact with anyone in the world. What once was a ‘check-in’ once a day became a social hang- out for me. As Facebook opened doors never before seen. Connecting with like minded people, strangers, and friends alike, on any topic. It became a place to share, a place to care. A place to have friends again.

But just like anything else, times are always changing. Unfriended and unfriending by the dozens, fast as lightning. It became a place of torment, saddened by all the news. Anything I posted was considered inane. It’s true as a first time mom, I asked a lot of questions and shared a lot of frustrations, honesty in return was what I expected.

Not being slammed in the face. Not completely rejected.

My husband said ‘don’t list your chores or check-list, it makes you look insane’… and so I was shut-down from feeling accomplished every day. Not important? Don’t share it.

My friends said ‘why did you keep your husband around, you seem miserable, it’s true’ they don’t have all the facts. Just because you had a bad day and a miscommunication doesn’t mean your relationship is over, it means you had a bad day..all I really want is him to take the garbage out, or be romantic, or… But no.. that’s shaming. You can’t shame your spouse, in fact, don’t talk about them at all.

Same goes for your kids. To say they are accomplished is a brag, and bragging is not allowed I’m told. Since I can’t say how they’re good, I ‘ll say how I’m challenged, I thought, but alas, that’s a no-no. Don’t shame your kids, the internet is forever. While I know it’s true, I long for a connection with another mom, one that says, I really REALLY get you.

I found a few locally, but they moved away again. I see them time to time, but not enough to be best friends. 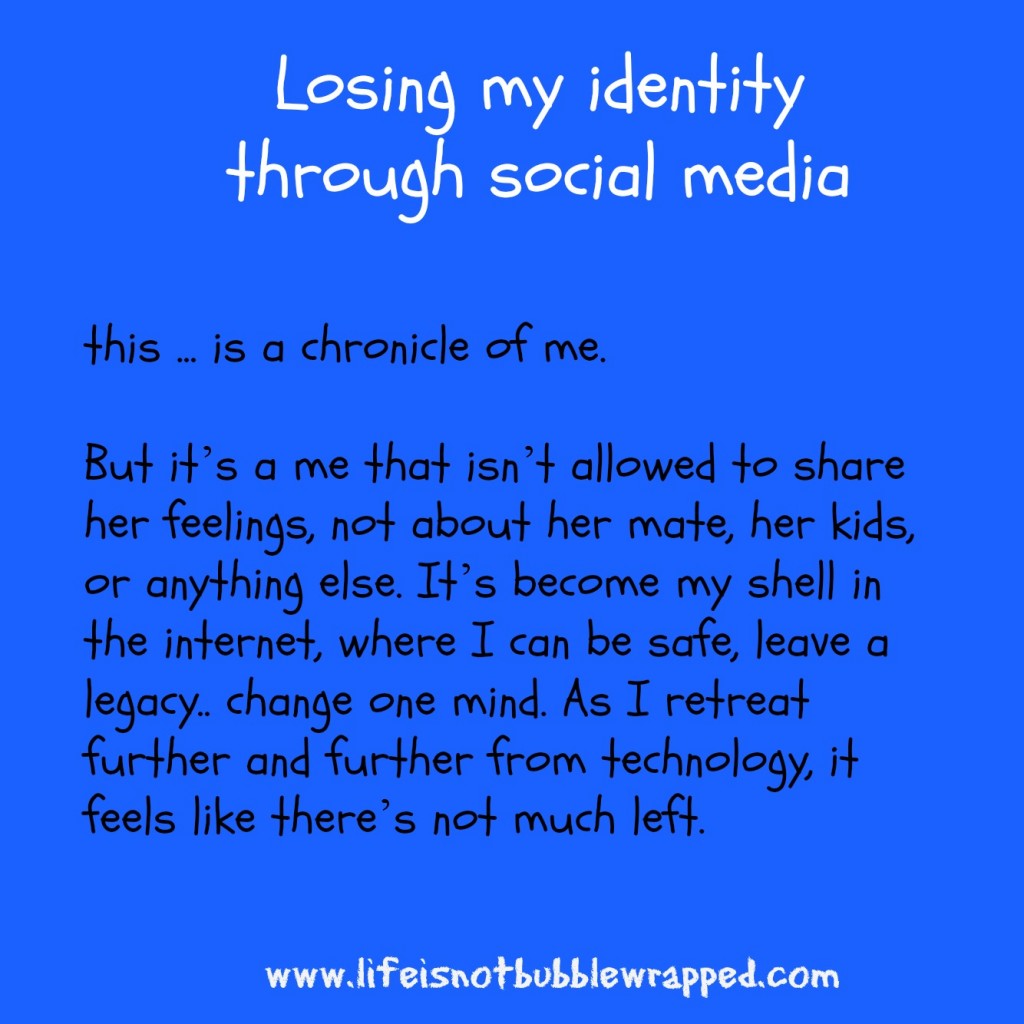 I shifted to groups of various kinds, on twitter and FB, most to do with diapering tiny cloth behinds. But nasty comments leave me cold, and answering always makes my temper flare. I ask and answer as nicely as I can, and leave the rest. Everything seems to get confused and so I find I rarely find a way to share.

While the world has shifted around me and my family has grown, my blog has stayed constant, the only secrets are when babies are brewing before 12 weeks (no, not one right now). It lets me tell my story, share and enjoy my life. Even if no one’s listening, this online journal is a chronicle of me.

But it’s a me that isn’t allowed to share her feelings, not about her mate, her kids, or anything else. It’s become my shell in the internet, where I can be safe, leave a legacy.. change one mind. As I retreat further and further from technology, it feels like there’s not much left. My friends rarely reach out, or don’t agree with my life. It’s not that odd, it’s really not I’m not breaking any rules. I’m bombarded with ads, and posts from well meaning folks who want to share their ideas, while I struggle with facebook changes that used to hide my comments in groups, now broadcasts them to anyone I know. Anything I truly want to share via my blog gets hidden– since it’s not organic [this is their way of pulling in cash by the way.]

I yearn for someone to say ‘me too’ in some way besides a LIKE. To be calm and rational when I cannot, not drive my head on a spike. I want a close connection, that’s not wired, to be sure. My  husband works all day, the kids take his afternoon and by then it’s time for bed. Sometimes we manage to connect, but when you have no time for lengthy discussions, it’s better just to be superficial. He doesn’t want to know what I do all day, he wants to know about the kids. So I can’t talk online, or with him most days. My voice doesn’t get heard at all anymore. Even the kids have noticed the shift, and prefer his respectable company to mine.

So once I was a complete person, who had thoughts and feelings, and while private occasionally would share, now I’m merely a shell that isn’t allowed to say anything… anywhere.