In a way you could say we’ve always home schooled our kids. From birth we teach them how to eat, sleep, walk, talk, run, jump, play, and then the real fun begins. You realize that all along they’ve been teaching themselves. When we put our oldest in Kindergarten, we had become convinced that it was the next logical step. She was resisting doing work at home, anxious to be like ‘all the other kids’ and ready to plunge into the world of rank and file… literally. For various reasons I’m not really ready to plumb in this post, we decided that semester was a good time to make the break, and not continue on through the year. 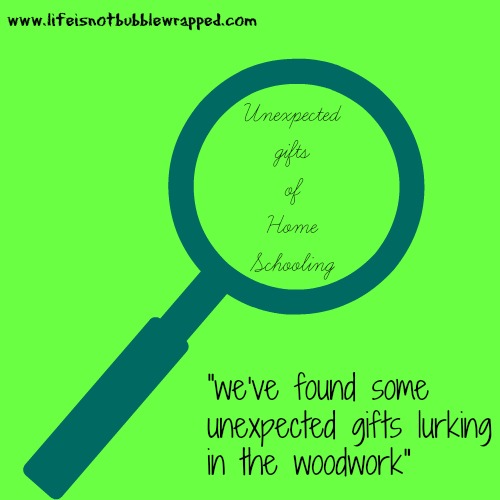 After 2 full weeks of ‘classes’- and this I giggle at, of course since our way of schooling looks nothing like a classroom- we are prepping to start a third, and we’ve found some unexpected gifts lurking in the woodwork. Would some of these have happened had we not put our oldest in school? I’m not sure. But they’re blessings all the same.

1. Impromptu sleepovers=Tired of being told ‘no’ for sleepovers because of school, the kids have latched onto the idea of having a sleepover at least once a weekend. So far the longest they’ve lasted is about half an hour, but they continue to ask, and we don’t feel bad saying ‘yes’… because even if they managed to stay quiet while staying up, or had a bad night’s sleep, they can rest later. Actually, nearly everything impromptu is okay now. Plus who doesn’t love making your own schedule and getting everything done in your pj’s?

2. Sisterly bonding time-=forget sleepovers. They’re playing dress up, taking care of their babies, getting into lots of trouble for talking too loudly, and yes, fighting. It goes with the territory. Also our baby learned a lot in the last 4 months. From crawling to walking, and forming babble into the beginnings of words, 2 teeth to 6, and so on.  K and C have always been thick as thieves. But between early to bed, early to rise, and homework and dinner, plus activities, she barely got to say more than hi and bye to her baby sister. Now they hug, kiss, snuggle, and, yes, chase each other every day. I haven’t heard this many giggles in months!

3. No morning rush + no evening rush = peace. While we still endeavor for the kids to get MAXIMUM sleep, it doesn’t matter that they’re not in bed by 7 and awake by 6 (torture, I tell you) and then spend 40 minutes saying ‘hurry up and eat, brush your teeth, did you go to the bathroom?’ and repeat it 15 times, getting more anxious as the minutes wear on.. and on..My oldest was tired of missing out on evening fun because an early bus ride meant no staying up. Since she can stay up a modest amount later, she gets more time with EVERYONE in the family.

4. Return of curiosity= Exhausted from running nearly non-stop, on weekends all my kid wanted to do was zone out in front of the tv, read a book, or play outside. She wasn’t willing to learn, explore, or question anything. While she perfected the monkey bars (and got a nasty bruise in the process), she wasn’t our go-getting kid anymore. Now? She’s excited to learn every day.

5. Dramatic change in personality= Kids on the bus picked on her, she was bored in class, and the list went on and on. Every day was a whine. A complaint. Tears. Frustration. Two weeks later, she’s rarely frustrated, most of the odd ticks she picked up from other kids have dissipated, and her vocabulary and behavior are improving daily.

While this is certainly a short list, it does cover a lot of bases that are important to us. We still have some kinks to work out. Sadly, the system made lying seem WAY more effective than truth telling, something we really don’t appreciate here. Daily there’s something else that we need to suss out as real vs. imagined. Tattling, refusing to eat, forgetting to use the bathroom, and more are still issues we need to work on… but we’ll get there.