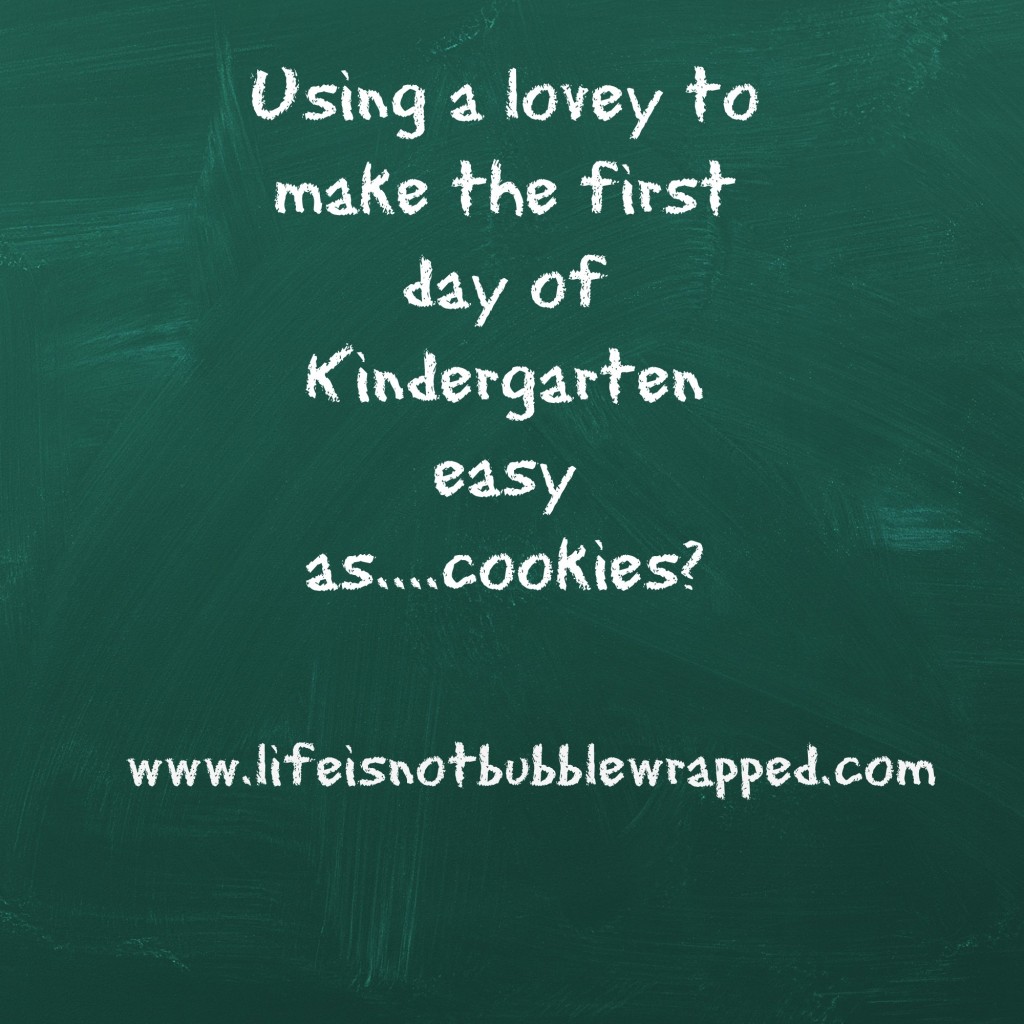 It’s that time of year! Late August and early September spell out b-a-c-k-t-o-s-c-h-o-o-l for many of us. Making that transition, especially that ‘first’ day of Kindergarten, pre-school, or day care is often a difficult one, causing children to be nervous about leaving “everything” behind them for so long. My first child just embarked on her Kindergarten adventure on Tuesday, and I set out to make it an easy day. The night before, I planted the seed in her mind that perhaps her favorite stuffed animal might just have an adventure without her, and tell her about it when she was falling asleep the next night. She could compare her adventures with his! It gave her something to think about the night before school started and help her get off to dreamland with happy thoughts!
Because of its’ simplicity, this concept could be used for anything from a doll to a blanket to a football to a doctor’s kit. Whatever your child loves the most and will miss as it is ‘left behind’–that’s what you use! All that’s required is some way to take photos, the object in question, and a healthy dose of imagination. Whatever your child loves, go for it! In this case, my child is used to a stuffed animal going on long trips with us, but NEVER short ones. Longer trips require that lovies stay IN THE VEHICLE and take a nap. So when we suggested that Pooh get in the vehicle for the short drive to school, much happiness ensued! 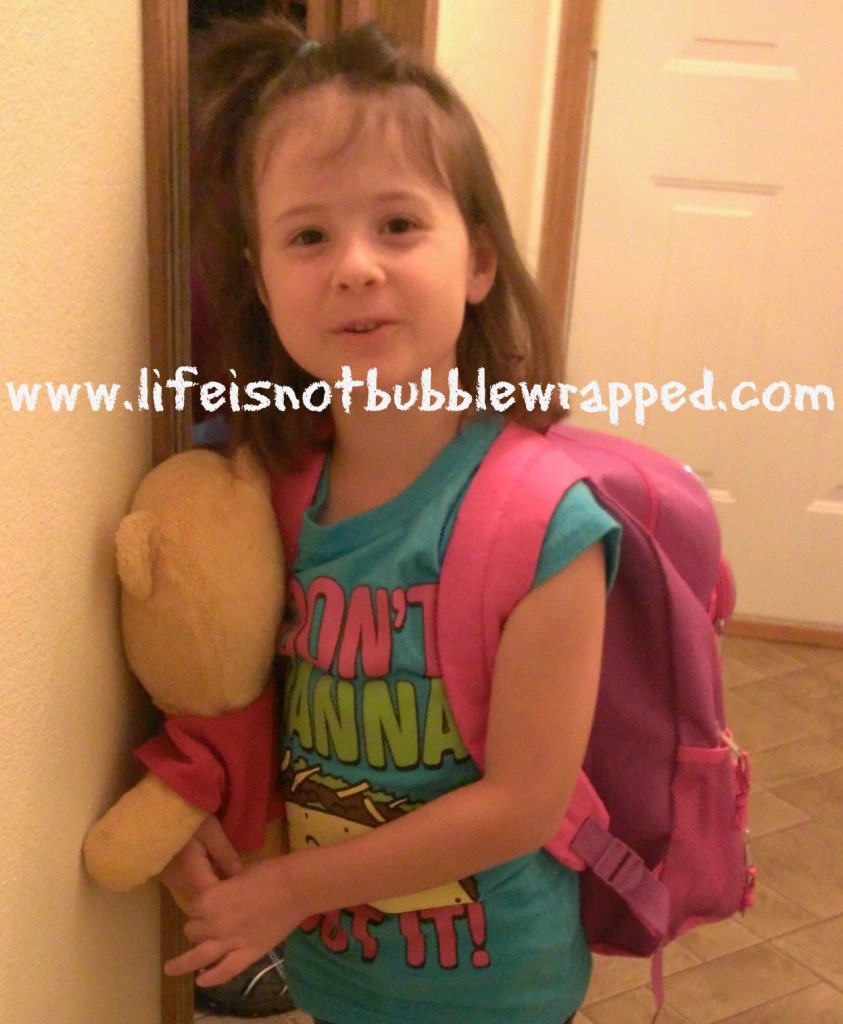 Once she was dropped off at school, Pooh got into her seat, and ‘saved’ it for her! What a great pal! We’re off on our adventure! If you’re walking to school or taking the bus, you could easily take a picture of the lovey at the front door, mailbox, or anywhere else that appears to be ‘waiting’! 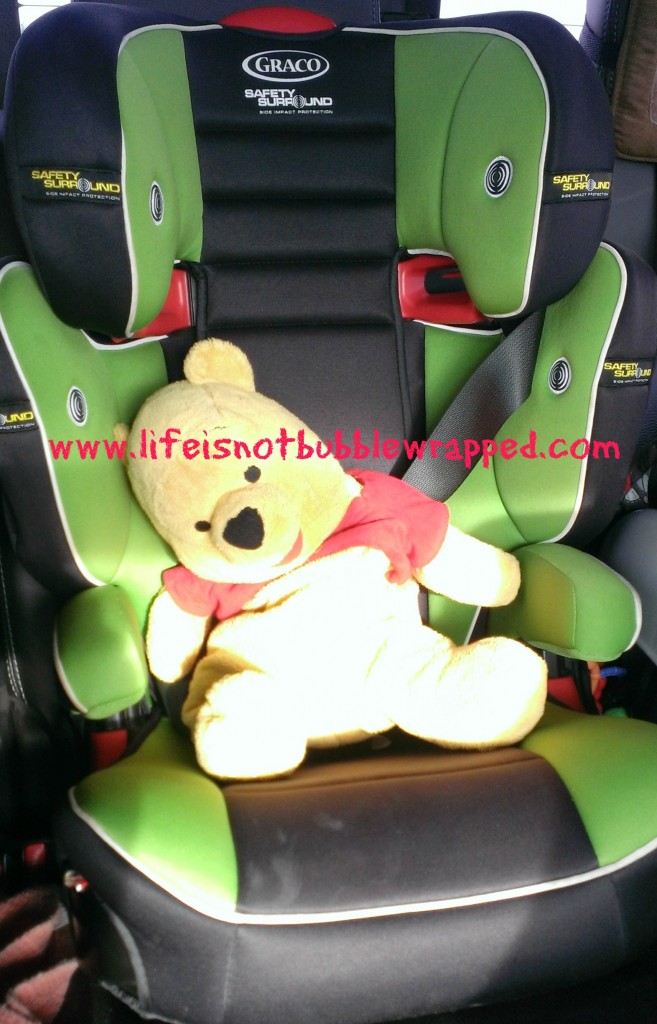 Move on to the next part of your adventures! We took our other kids to the store, so here’s a ‘shot’ of him eying the groceries and other goodies! If you felt comfortable using a grocery basket or cart as a prop, or taking the critter to the gym with you, etc. Whatever you do next, get involved with the environment! Just make sure, like ‘Wilson’ from Castaway, that your child’s lovey doesn’t get left behind! 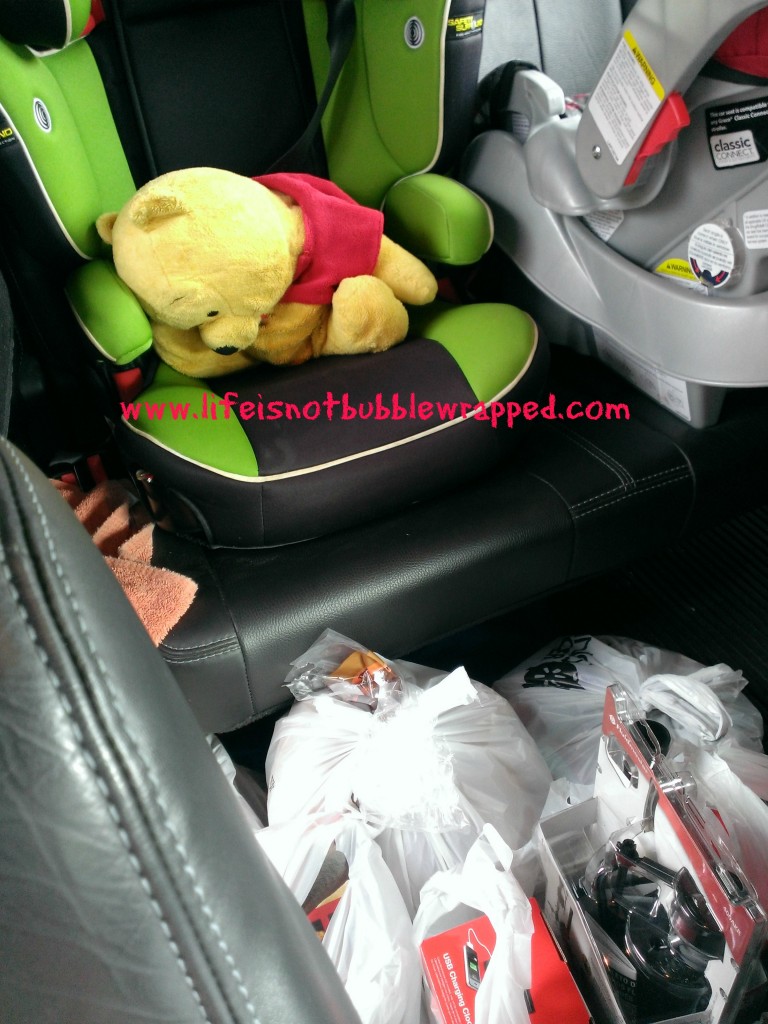 Then, of course, it started raining, so we watched it out the window for a while! So sad! Something they could share, since recess was rained out! Use your house, car, front door, anything familiar as props so that it’s easy to realize at a glance where the lovey is ‘missing’ the child from! I guess it’s kind of like Flat Stanley, with more dimension! 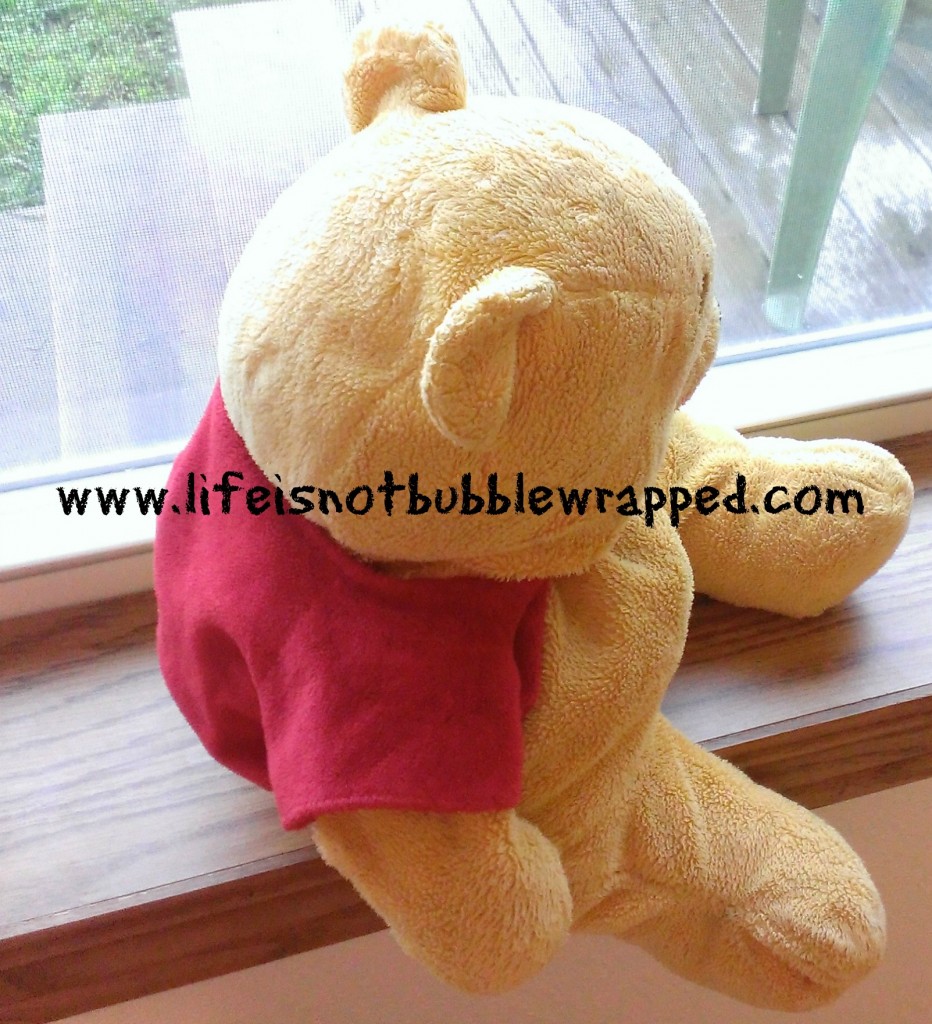 Since we have younger children, we wanted to get them involved, so he ‘watched the movie’ with the other kids! You could easily set this up without siblings, but with other friends like a Toy Story adventure! Hey, make it up if your day isn’t exciting! This is for your child, whatever you think would cater to them. Princess tea party? Pass the sugar and put on a crown! Bob the Builder? Put your ‘bud’ in a dump truck! 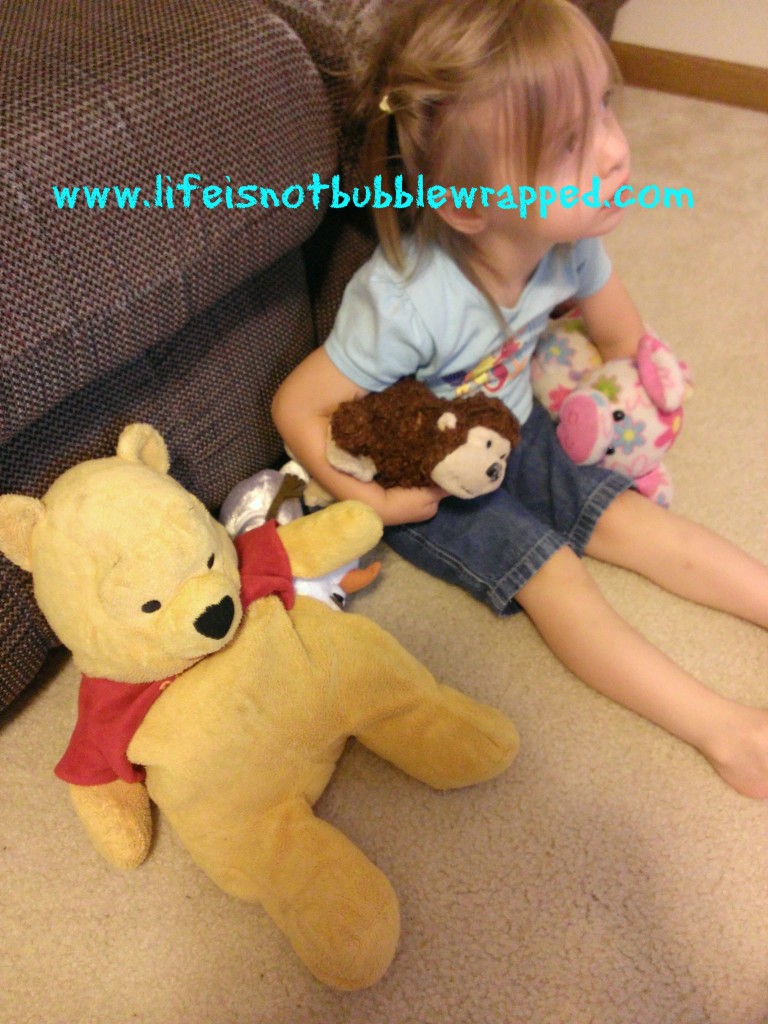 Picture this: Lovey watched a movie with younger siblings!

This I think is the BEST idea that I had! Get the buddy involved in the making (or buying, whatever you have time for) a special treat for after ‘school’!  This will make your child’s day! You could pick up pizza, chop veggies, hide behind the fruit bowl- the opportunities for a ‘food-venture’ really are endless.. but if you want what we did…. here’s a special treat just for my readers…. 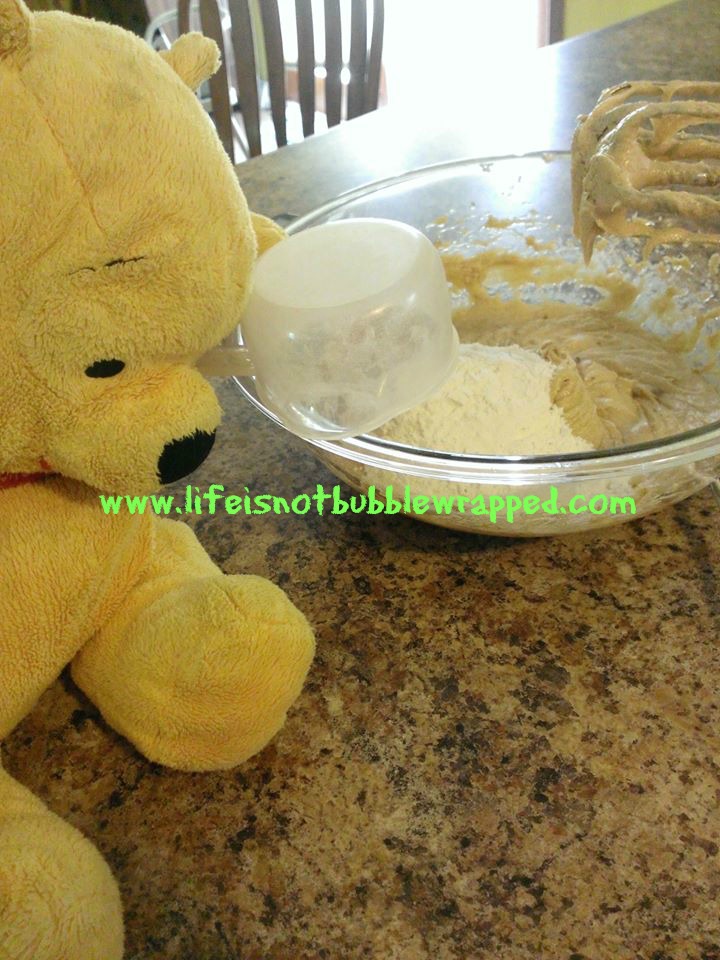 Lovey making a treat to welcome child back from the first day of school!

Once you finish with your adventure picture taking, get ready to sit back, share the pictures with your little one after that looooong day of ‘missing’ and say that of course the ‘friend’ had so many more adventures to share with your child later, but first they want to hear about school! This way, as the child tells the friend about his/her adventure, you get to hear it, too! Don’t forget to take the buddy back with you to pick up the child, or leave it right near the entrance to your home for a long awaited hug!