All of the methods I’m describing below work for short term storage, too. Truth telling time? A lot of my diapers go from laundry basket to bum without much stop in between. Even folding a full load of flats and stuffing pocket diapers only takes 7 minutes (yes I timed it) so it doesn’t add a lot to your laundry routine, but sometimes in any given week it doesn’t happen right away– and that’s okay. Typically I just take a ’round over and jab into a container’ sort of method. Putting them waist down helps hold the flaps together and keeps them neat. Because the container has straight sides, they stay pretty well stacked and balanced, no matter how many are in there! My suggestion is that when you HAVE the time, you take the time to line them up nicely and it will be easier to keep it going in the future. If it’s a mess in between? Honestly I don’t have a lot of time to consider the aesthetics, it’s just a routine I’ve gotten into and it makes me happy to see everything lined up, because for 30 seconds, everything looks pretty! This is the type that I have used: 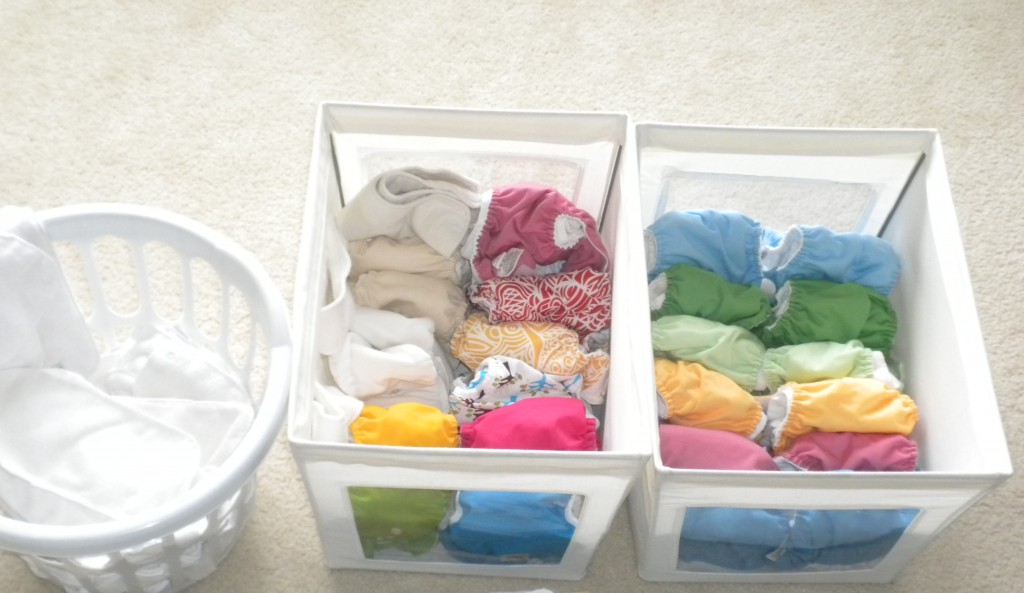 This one works well for me, and since it’s see through, and fits on my changing table shelf, it’s the longest lasting method we’ve used. 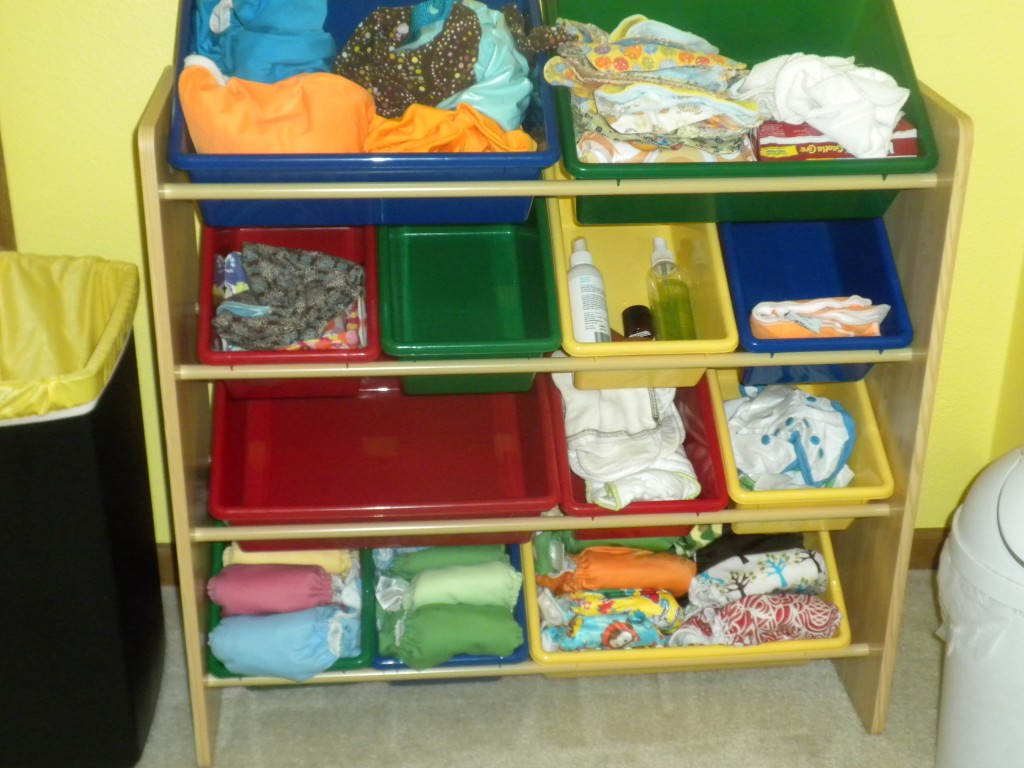 This worked well for when we used a standard sized diaper, but…. 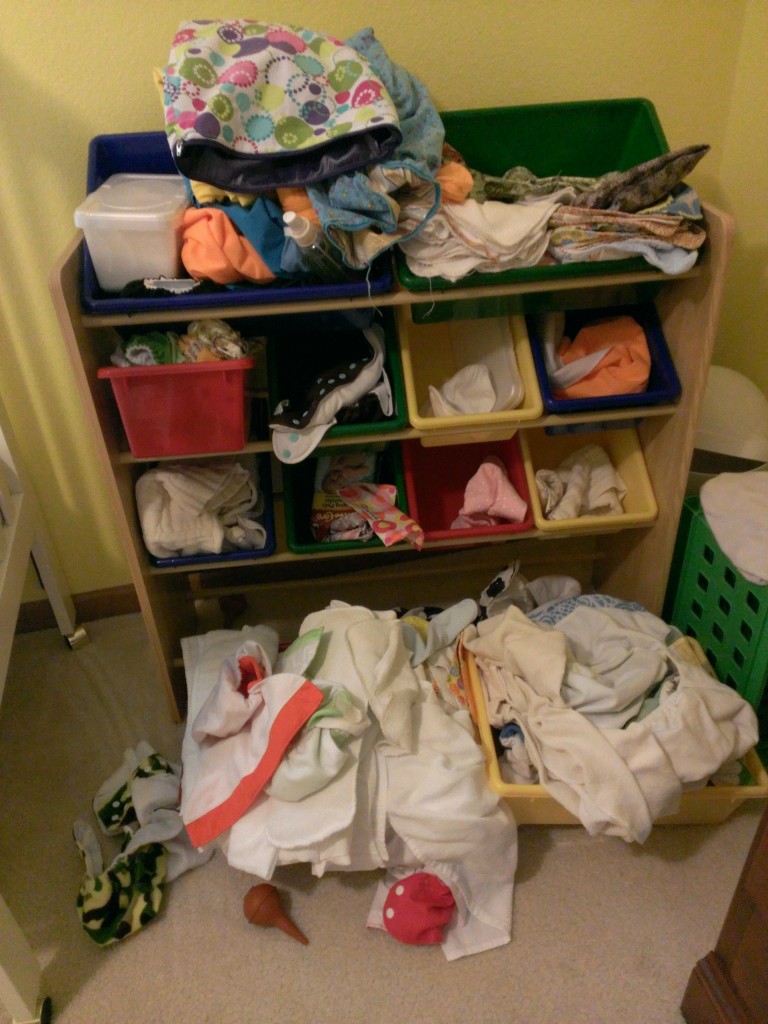 …when we started using flats, which were bulkier and put more diapers in rotation…well it ended up more like this… so we went back to the changing table + bucket method!

My buddy Jutta asked for this hack: How to neatly fold covers for storage without pre-stuffing them. I don’t want to snap them because that just feels like a waste of time. Snapping them off the line and then unsnapping to put on baby. They end up a jumbled mess stuffed in a container and it’s not pretty.

Answer: Wow. She came up with a good one, right? I’ve put away diapers long term twice now. The first time I used the original plastic/vinyl packaging that my aios came in and re-sealed them in there and threw them into a rubbermaid TYPE container along with all the other diapering stuff, after making sure everything was 100% dry–very important to avoid mold! You don’t want anything to be wet or the container to be airtight. The second time I didn’t use the packaging but just shoved it all into the box, again not pretty. I need to ‘file away’ our newborn diapers again. There are several ways to make it look more neat. I’ll tackle a few main categories. I would gather all the diapers and sort them into containers by style so that they’re easy to find, and because I’m like that? I’d organize them by rainbow order of color too. OCD anyone? Here goes:

Using the tips below, store diapers just like clothing in an out of the way dresser drawer, cupboard or bin.

Pocket Diapers or Covers with inserts

If you want to avoid stuffing them for long term storage, you could just lay the inserts in the outer pocket and wrap it around to make it full and look pretty. Aplix/velcro diapers would be fastened to laundry tabs and you could just round the edges over and place them top down so that the crotch (I actually used a thesaurus and could not find a synonym, but it’s such a weird word!) of the diaper is facing up. This would work for snap diapers, too, you don’t have to snap them, just tuck the tabs loosely around and line them up until you fill the container. This is the way a lot of people put diapers into containers for daily storage since it allows you to find the diaper you want at a glance. Alternatively, you could simply stack them up as if they were underwear. Another option would be to use a divider type of product (think packing kitchen glasses for moving) like the insert of a wine/beer box to roll the covers into a loose tube and let the inserts simply stack alongside of them. Finally, you could just lay each diaper flat on top of another with inserts tucked in between each layer, which would keep them from shifting and coming loose in the box.

Stack on top of each other or waist down similar to pocket diapers above. Store disposable inserts separately in case of biodegrading.

These would do best trifolded or pad folded and stacked. You could also diaper bag fold the flats and store them that way since they don’t come loose as easily as other folds.

How do you store your diapers? Long term or short term?