Sorry, I went a little 1990’s on you there. You’re welcome. I’ve been thinking for a while now that it’s been 10 years since the ’90’s’…hmmm. All the music and etc. that I loved is now somewhere in the neighborhood of 15-20 years old. Good Lord. That means they’re ‘classics’… *shudder* I officially understand why my parents really really really wanted to listen to ‘oldies’… I always wanted to listen to things that I liked, that were new, too, but didn’t mind the old stuff. In fact? I kind of like their old stuff more than the newer stuff, especially now. So in order: my old stuff (80’s and 90’s), their old stuff (40’s-80’s) and then.. the newerish stuff that’s on these days. Honestly I’m starting to get to be of the ‘that is not music’ and more of a ‘they’re just putting on a show to see how vulgar they can be’…. there was a clip on a daily tv show that featured a ‘famous musician’ and his set singing during a festival. Presumably one that families go to. The had to BLUR the entire female forms behind him because they couldn’t show them on tv. The WHOLE THING. Umm.. wow. If they’re wearing that little clothing, it’s probably not about the music anymore…But I digress.

I’m writing because of mother’s day of course. I wrote about my feeling like a fence sitter last week (scroll down). Too scared to put a foot on one side or the other. How taking a stand is hard. There are so many more people that write about this sort of thing more eloquently than me. Their turn of phrase is perfect. Mine is blunt. But you never have to wonder exactly what I mean, do you? 🙂 I tend to blog more for me than anyone else. Maybe one day my kids will read this. They’ll search for certain things.. mentions of their name or fun times we’ve had. They’ll run across a post or two about how hard it is to be a parent.. maybe before they become moms, or maybe when they’re struggling with an up all night kid…or early morning rising spouse.. or maybe they’ll stay up late, eating chocolate during finals week in college and run across something that inspires them. Hey, it could happen! What I hope they take away from my blog, my lectures.. err chats with them, and their growing up.. is that life is HARD. It is not FAIR… and only your family will truly be behind you 100%.

Yesterday we visited my mom (and whole clan on my nuclear family, which is…oh total we’re nearing 20 if we all manage to get together)… then my husband’s grandma and her second husband (she lost her first when Matt was a teen), and finally Matt’s mom and stepdad, his younger sister and step grandma were also there. It was a huge day and by the end of it the kids were just.. wild. Exhausted. It was completely expected. The baby did great by zonking out. We were tired by the time we got home, but the kids went to bed with a minimum of fuss. We did mini donuts for breakfast (which were re-run to the kids’ joy this morning), had lunch with my folks and by accident of time nabbed dinner with the in-laws. So while it wasn’t a stress free day, it was a cook free day! 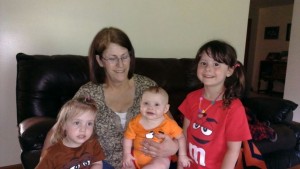