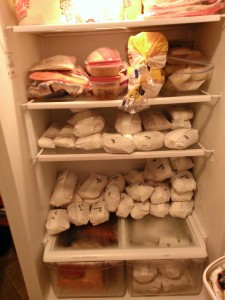 Okay so our favorite butcher is closing (boo) — it’s a grocery store. It had JUST celebrated its 70th year. Not kidding. Such a bummer. Anyway. So we placed an order end of August and it finally got filled this weekend. Hamburger (ground chuck which is lean), steak, pork chops/roasts, stew meat, chuck roasts, sausage, bacon–we had planned on this feeding us with some fill ins until the first of the year (minus the breakfast meats because they go quickly around here!)…

Then the opportunity came up to get in on a 1/4 of a grass-fed beef from some friends of ours family. So we said yes. Umm… but now we’ll have to make some room or turn on our other freezer, because now this one is basically full 😛 Fine with us, then we’ll have food for a year (beef wise anyway!) but it’s a huge expenditure all at once. The good side is that now as long as the freezer ‘lives’ then we’ll have food THERE for us for a year at least. It makes menu planning a LOT easier, too! I’m trying to use up everything we still have and plan fresh for October, as well….

Monday- Chili and grilled cheese (I made the chili Sunday and my evil plan is to do similar things for every Monday because it is our biggest day besides the weekends!)

Tuesday-Hamburger stroganoff, green beans, garlic bread (this is such a nice go to once in a while, plus it uses up sour cream, which I always over buy on!!)

Okay I read about this in a magazine, but they never gave details. Pinterest only has a few photos. So I’m not sure if this is popular or just a new thing, or if people have been doing it a long time or what. I did this a few weeks ago when we had ‘no food’.. I made mac and cheese (stovetop, but NOT boxed, we used velveeta as the cheese) — then added whatever we could drag out as leftovers to the top. A GREAT mix-in was aged parm cheese. Everyone got to pick from what was there. Right now we’re low on leftovers, so I may cook bacon, put out some veggies, cheese, and things like olives/pickles, and call that good.

Thursday-steak, tator tots and mixed vegetables (gotta use that grill!)

Saturday-Bake a huge ham and eat some random foods I figure out later with it. This will become part of a casserole next week and sandwiches, too!

Sunday- Ham and Beans and cornbread