We had a crazy awesome weekend. My husband decided to come home early on Friday. He and I relaxed while the kids napped, and then we gathered some groceries and called it an early night. Or at least I did. Lots of sleep, and I felt GOOD on Saturday. So after relaxing (and eating donuts) we headed outside to enjoy the first of the nicer weather.

We cut down trees and did some burning (don’t worry, they were fallen trees), I moved some very small branches, but still the walking back and forth was enough of a workout. I started out in a sweatshirt and was down to a tee in under an hour. Sun really warmed up by then! I mowed an area that a tree had been laying in, too, thinking the kids would play there. Seriously? The most that got done was my toddler stomping on some charred papers to make them fall apart. But it was HYSTERICAL. She kept saying ‘and this one’ ‘and this one’ ‘and this one’.. I was practically rolling on the ground. But at least that area is cleaned up now and makes for some fun ‘digging’ in the sand and such back there in a little cove… we gave the kids a bath (so much dirt) and then while we ate leftovers, we decided that a wienie roast over our fire pit (first time using it to cook with) was in order. So we headed into town. We ran a couple of short errands and let our oldest ride her bike on the bike path at the park. Then we grabbed the needed stuff and came home to nap. Then it was cooking time! 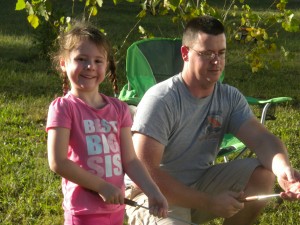 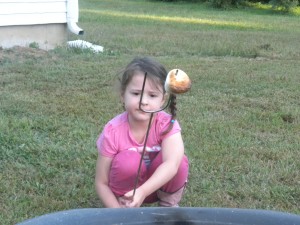 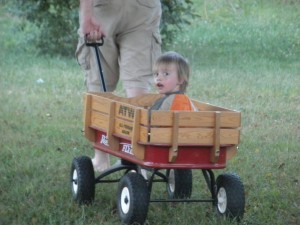 As you can see, we did more than cook hotdogs, we also rode in the wagon, loaded the bubble machine up (each kid played separately, which was awesome), took a bunch of pictures and the kids played in a lot of dirt and picked lots of wildflowers…and that was just Saturday… wow.