The snow finally melted! A lot of it was the sun, but a lot of it was me tromping up and down the hill a million times in my snow boots and taking a snow shovel to a path down the middle. Really helped heat the ground underneath and encourage the thaw! Woohoo! We made it out last night for a quick grocery run and swimming lessons! I think the kids were as happy to get out as I was!

I love twitter parties, or blog giveaways. I really do. It’s like the lotto, but with much better odds. My favorite thing to win of course is diapers, because you can never have too many. A second of course would be cash or equivalent, but that’s a rarity. What has come now is definitely in the top 5. Stuff for the kids (awesome) that I don’t have to buy!

I happened to catch on to a twitter party at the end of February for Dr. Seuss’s birthday coming up, real aloud day, and so on. Most of the people chatting were educators, but it was fun to get new ideas and resources, and of course they were impressed at my ‘little reader’.  I won a prize. Yeah! It took a bit, but finally came today. Definitely worth the wait! 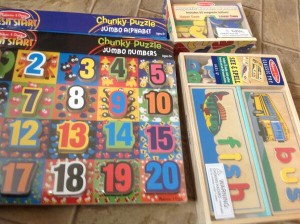 perfect for both kids!

That’s 2 chunky puzzles (ABC and 123), a set of magnetic alphabet letters, and a set of ‘see and spell’ boards, which I had coveted a few times before! There is a ‘bank’ of letters and the kids fill in the spots with them to make the word. B, U, S for example! I really want my ‘reader’ to learn to write and THINK about how things are spelled and I think this is the perfect thing. I can let the little one play with a puzzle or two, and she can sit down with the boards and sound out words with the letters. She’s got so many memorized already, and I think she kind of skips words she doesn’t know so maybe this will slow her down some!

The other prize I won was this. It was supposed to come with candy, so either it’s wrapped oddly (there’s a flower pot, but that seems unlikely) or it was missing, but either way. Eh. But there are a TON of goodies in there, including the movie. Both blu-ray and DVD. Oh and you get a digital copy too, if you want it. To me, that seems like overkill. May have to ask my hubby about getting the digital and then donating at least maybe the DVD to our local library? I’m not sure how that works, but if they’d take it and use it, that would be awesome, especially since it JUST came out this week! We’ll have fun exploring all the other stuff and seeing how it relates to the movie.

Have you won anything lately? or had a ‘fist pump’ moment? Share with us!