I swear I had a great picture for this post and yet, nada! However, another big hurdle seems to have basically evaporated overnight! The big kid is WRITING! Yup, at first it was just her name (I’d been trying to get her to write it and the most I could ever get was a K out of her in November) but the last couple of week she’s been excited about making ‘cards’ and writing her name on them and who they are ‘to’ as well. She even drew a stamp in the corner! This is a far cry from the kid who drew roads in the shaving cream, refusing to write a single letter! 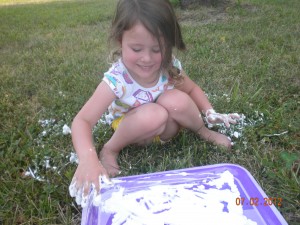 I don’t need no stinkin’ letters!

I think maybe the turning point was when she wanted to write dad a note while he was out of town, so I took a picture of her writing ‘dad’ on her Magna Doodle…or maybe it was when she discovered she could use a pencil to trace over the letters in one of the workbooks she’d gotten, and get some practice out of it. I’d been doing my ‘faux’mschooling with her since the beginning of September! I printed out different things (like an owl with the letter O to color) and had her trace each one with her finger first, which led to using a crayon to do the same!  She had to just get used to holding a writing instrument in the first place, since usually she gripped crayons so hard they broke in half. Around the holidays it has slacked off a lot, with my husband being home on an extended basis, we’re all gathering around the table for breakfast, lunch and dinner, doing things together, and just focusing less on ‘hey do some activities’ and more on ‘here’s your books if you want to do some stuff, go ahead’ and that is fine, too. It’s actually been quite amazing, she’s asking how to spell things, for help with letters, and if she can draw us little ‘cards’. I finally told her to quit taking little pieces of paper out of her teeny tiny notebooks. It was getting quite annoying picking them all up when they fell on the floor from wherever they were stacked. She’s doing better about either writing in a notebook or just recycling whenever she’s done with a page… or I’ll admit, I sneak stuff she hasn’t touched for a while and hang some of it up and recycle the rest. I recently found the old box of tractor feed paper my parents were going to toss out ages ago and tore some out for her. She was thrilled. Immediately she asked what our ‘number’ was, she meant address, but practiced her 911 address part (not the words) and our phone number, as well!

She writes daddy (a lot), her name, mom/mommy, over and over again. I grabbed a couple of flashcards for her to copy but that didn’t go over as well. Maybe another time,  as she gets distracted pretty easily, but I figured if she wrote ‘fox’ and ‘star’, that eventually she’d get around to ALL of the letters in the alphabet and get some practice of sounding out words, as well! I’m having a harder time with math concepts, we try and incorporate math into anything we can but math is NOT like reading, you have to have some writing skills to do math ‘problems’, but hey, one thing at a time!