Have you ever noticed that kids get a lot more mileage out of the box something came in than whatever was inside the box in the first place? We always have boxes laying around, waiting to be recycled. Please don’t judge me by the box my baby decided to carry around with her.

Yes, we use ‘processed cheese’ for scrambled eggs, mac and cheese, and grilled cheese. Haven’t found anything else that melts that well, and let’s face it, all cheese is processed in some way, lol.

My oldest daughter can be more selective about what she uses, but sometimes not. Just the other day she grabbed the baby shoes her sister was carrying around (trying to get me to put them on her for the umpteenth time that day) and used them as ‘cars’ for her new princess figurines. 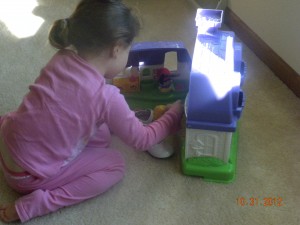 Traveling to the ‘castle’.. by the way, suddenly calling the FP house a castle worked brilliantly. Everyone has been evicted in lieu of the princesses coming ‘home’. *not having to buy a castle on top of everything else.. PRICELESS*

Matt’s grandmother very nicely gave my 4 y.o. some seashells from one of their million beach walks. I did warn his grandmother that they may not be just set around to look pretty and they’d probably break. Then I told K they were fragile and let her take them outside. I haven’t really seen any broken ones, so she’s been really careful. She plays with them under her playhouse. Whatever keeps her busy! 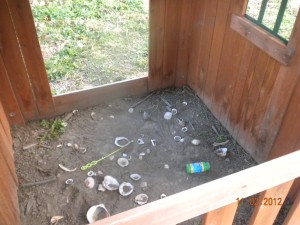 What fun/interesting/odd things do your kids play with? Shoes seem to be a big one around here. Now that it’s gotten colder, mittens are being used as socks and put on and taken off several times a day. Boxes, blankets, pillows, frisbees… you name it they’ve done something with it other than an object’s intended purpose. Share in the comments! Thank you!