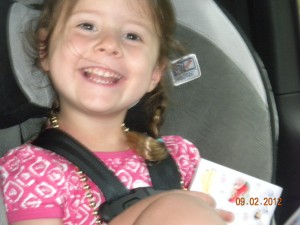 Right about her car seat belt it looks a little funny, that’s because she put a sticker there in the shape of a heart, because her little sister “is in my heart so I put a heart sticker over MY heart”…

Also at our family reunion she said she wanted to give someone a hug goodbye, and I was like, okay, who, and she said A***, and I said, do you mean D****? A little boy she had been playing with and she said no a big guy. My cousin, who is in his 40s, always asks you have you’ve been, you’re guaranteed a hug, and he’ll tell you he’s ‘still working’ and give you his bowling scores. He and K probably share about the same mentality level. I’m not being offensive, it’s true. He also has cerebral palsy, which makes him move a little awkwardly.

But my little girl? Heard and saw nothing odd in my cousin.

She simply took it on faith that he is one of God’s creatures and gave him a special hug goodbye.

And that? That’s what she is my rock star.