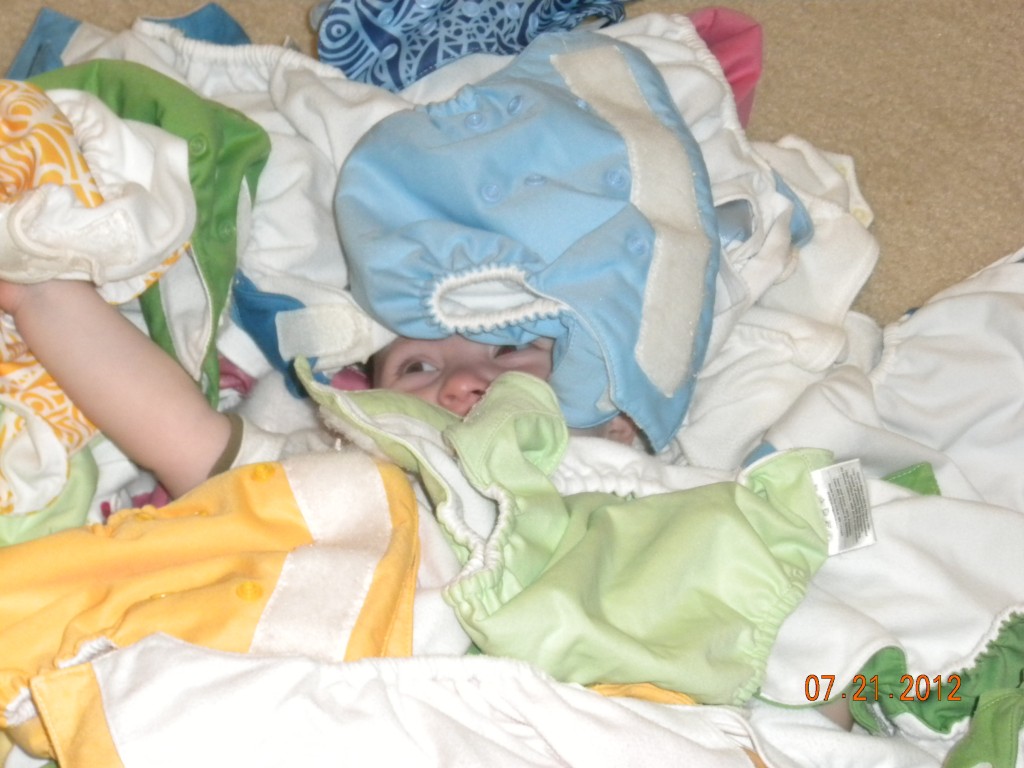 The happy one, hiding in her diapers

It’s been said to me before, when I postulated that in taking a week’s long vacation we’d need to find a place to wash diapers… why don’t you just use disposable? To be honest the thought hadn’t even crossed my mind, we’ve used cloth diapers so long, and the more I think about it, the more it bothers me. Yes, other people do and have used them and while we were adjusting to a newborn the first time around our first was in disposable diapers full time for a month and part time for a few months after that. When the sassy one was 6 months old and we moved, we bought a pkg of pampers for the first time in a long time, and then after about 2 diapers almost died from the stench and donated the rest of them, choosing to use cloth no matter what. Do I look down on anyone who uses them or did? No of course not. That was/is their choice or their knowledge at the time and there’s no sense in arguing over it. I’ve heard plenty of people say ‘wow if the diapers were like that when I had my kids’.. that’s what I mean by knowledge, or perhaps opportunity.

So could we do it for a week? I don’t know. Maybe. I’d be constantly worried about leaks and blowouts, though, and we’d have to carry extra clothes with us everywhere. For everyone. We’d probably end up going through a lot of them, just because of the smell. That’s a lot extra for a vacation to deal with. Now.. that bears the question… What if for some reason we HAD to use disposables. It just boggles the mind. First of all we’d have to drop pretty much any extras for ourselves including dinners out, soda, and anything else that’s not strictly food related. Since we used the same diapers (for the most part) with both girls, we haven’t really had to pay for anything for little miss happy. We’re really spoiled in that way. I think we bought a sippy cup, some clothes (some on gift cards) and batteries for her womb bear and other electronic soother things (the bouncer, jumparoo, etc).. and that’s about it. For the most part it’s just been breastmilk and table food for her, so there’s not even that to calculate for cost. We really are lucky that cloth worked out well for us and that we have enjoyed it so much. To put disposables back into our budget would be… socially crippling let’s say for me. No chatting about cloth diapers, no blogging about them, no scavenger hunts or giveaway entries, no reason to communicate with strangers online or IRL about diapers… how odd that would be! Maybe that ‘s why I’m addicted, it’s my social outlet? That is why I ordered 3 diapers that are going to be going out of stock soon and won a giveaway for 2 more, when clearly, I have enough. Lol. Disposables? Over my dead body–and even then, I think my husband would still use them!

*note: I just changed a diaper I would not wish on my worst enemy. I coud describe it to you, but I don’t think I can do justice to the horror. I’m thankful that I can put the diaper in the washing machine and get the smell out of the house… EWWWWW.