Just in case anyone ever ‘googles’ looking for information about their baby getting a tear duct surgery, I thought I’d put this out there for them. We got to ‘major children’s hospital near us’, it’s in the top tier of hospitals, but not in the best part of town. The outside and in has lots of colorful artwork, train systems running overhead, and so on. Inside was a zoo, though. We got there in plenty of time, but the real issue was parking. Holy cow is all I have to say. Matt finally parked on level 4, and the second trip around, he let me out. I seriously thought I was going to be sick. I’ve never had real issues in a parking garage before, so that was new. Needless to say, get there early.

Also, bring plenty to do. We thought we’d be able to use my husband’s phone, but I guess it wasn’t getting a good signal so instead of draining the battery, he immediately turned it off. I could have done with a book, or something. I ended up people watching instead. And, it was LOUD. So loud in fact that I got one of the worst headaches of my life. It made me sick, and I’m SO grateful to our friends for keeping Keeley and upon hearing I was not well, keeping her for about another 2 hours and then bringing her home. Wow. I was still sick the whole night, I took more tylenol in about 8 hours then you are supposed to take in a 24 hour period, it was ridiculous.

Anyway, so besides them calling us up for paperwork and having to wait for a LONG time, this is basically how it went:

A friendly guy in a bow-tie came and got us and did a preliminary eye exam. Mostly? It involved making stuff go off (kind of loudly, but not nearly as loud as the waiting room) across the room so that the baby/kid would look at it and they could use some fancy lenses and tools to take a peek in the baby’s eyes without them really understanding it. There were a few questions (about paperwork we were sent in the mail) and the guy said ‘clogged tear duct, huh?’ I could diagnose that over the phone.’ He’s right, it’s pretty obvious.. anyway.. All the time, the baby sits on the parent’s lap, so no scariness involved! Now, my kid, having fought me off of wiping her almost always crusty eye (see pic below) was pretty good about swatting the guy away, but he managed it anyway. Then we went to a different room and had to hold her down for 2 drops in each eye. Not too traumatic, but she wasn’t thrilled.

Then a 1/2 hour wait. We SHOULD have gone and gotten something to eat/drink and taken tylenol because it was more like 40 minutes (the place was packed, you know?) so if you get the chance to get a breather, get one! Walk around, take a stroller with you, whatever.

Once we were called back again, another person peeked at her eyes, then we moved to yet another room and once again, my husband took a seat and they did some more complex looking at her eyes by the surgeon, mostly using finger puppets of various weird monster looking things to try and get the kid’s attention. The doctor explained the surgery (I had already used google so I knew the general idea behind it) and my husband said ‘let’s do it’..

I have my own reservations, mostly about anesthesia. She is SO little. But I guess the anesthesiologist is going to call a day or two before and learn everything about our little miss to make sure she gets everything just right. They’ll call us the day before with feeding instructions, too, and to tell us what time surgery is. I really really really really hope we get the first surgery appt of the day.  We scheduled for a Friday so that my husband could just work around it or take the whole day off if he has to, and we’ll go into the weekend so I won’t be dealing with any possible complications/eye drops/etc on my own, because who needs that? Sheesh! She won’t have to have an eye patch, just drops, and it’s about a 10 minute procedure. I spoke with someone this week that said their niece had it done and it went really well. I gather it is fairly common, but still… my baby! Isn’t she adorable, eye matted closed and all?!? 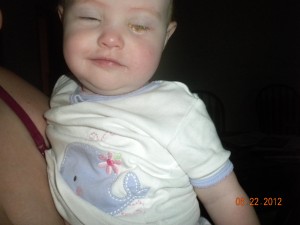 Just as a personal note, be prepared for anything. There was a poor girl there shrieking because she was apparently ‘in house’ and her breakfast got there, but they made her leave it and wait for her appointment, but it was taking forever, so she was starving… I felt so bad for her. Either she’d had some sort of accident, or was mentally impaired, either way she had no filter and it was traumatic. Then there was the lady who when talking to her kids just annoyed the crap out of me. Matt put his finger on it, she talked to the WHOLE ROOM when she told her kids something, she didn’t carry on a private conversation. She also was clearly in her 30s, very tall and wearing blue plaid pajama pants. Seriously? Put some clothes on, you’re out in public. Her daughter had on jeans that were about 3 inches too short, too. I wanted to roll her pants up for her so they looked like pedal pushers instead of just too short. What’s wrong with shorts? It’s 90 freaking degrees outside. Some kids played happily, some kids not so much, but there was a general din to it all. I’m thinking highly of becoming agoraphobic except to go to the library and church, it was insane ya’ll!