To be honest with you, I’m not even sure where the weekend went. Thursday Matt worked from home, Friday I took Christmas lights down off the roof (did you know I was scared of heights, more like terrified?) with me in the tractor bucket. Yeah. I should get huge points for that. Keeley took pictures (see below), which included a study of her feet and just about everything else. Lol. I know we went to the store, Matt did some mowing several days, with a little help from me and we traveled. A niece and nephew graduated 8th grade (2 out of 19 kids), so we all went to that one, it was only 25 minutes. That was almost too long for them. Then Matt’s younger sister graduated from high school, he went to that, they had 250, we figured it would be over 2 hours long, but it was just over an hour, so we probably could have dealt with that, but 2 days of odd naps in a row is just too much, so Keeley watched a movie while he was gone, and that was okay. Then the next day (Saturday) was the party, and of course Keeley had swim lessons, so we did that, got her showered and the girls ready, had lunch and then headed out. We got there  a couple hours before everyone else was due to show and chatted a bit. We ended up staying way longer than we originally planned. Keeley was sick (who kept giving her sweet tea is beyond me, it wasn’t me), but got over it, then she got stung by something. Brennan seemed way overheated and we didn’t even need to change her diaper in that amount of time (I did, but they weren’t really wet), but by the next morning her diaper was full and she was less wilty. Sunday we were bad and didn’t go to church. Instead I made jam, pizza sauce to make lunch, cleaned up a little bit, laundry and so on, Matt did some more work outside, more mowing, burned some wood that needed it, pushed the creek bank back down to make a beach again so Keeley could play in the sand. We have water shoes for her finally so even if she steps on something it won’t be awful. Then we filled the little paddling pool. Sadly, Mr. Frog has a hole in him, so I’m not sure how long he’ll get more play. He was only like $15 so I guess 2 summers out of him isn’t too bad. Now Matt’s outside putting new steps on our porch(es). He did them in a hurry before and they were steep and narrow. They’ll be wide and shallow? now, we’ve had 2 sets of people with crutches trying to go in/up the steps out of the maybe 5 times we’ve had people over so I guess it is necessary. Probably the most fun part of the weekend was seeing Keeley beat the pinata (why can’t I make the ~ work?) and candy fall out of it. I have a short video that I  may link another day. She had a good time everywhere and didn’t want to leave. Busy week coming up (and Matt is going out of town of course!) so we’ll see how it goes. 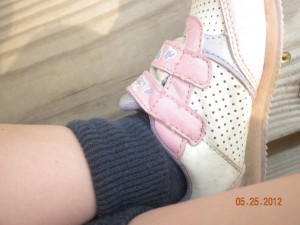 A study of my feet, by Keeley 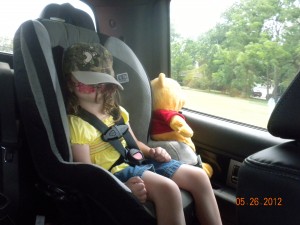 cousin it napping, pooh looking out the window 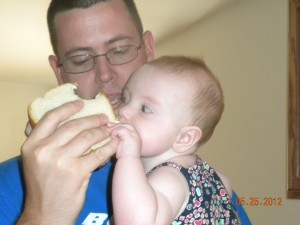 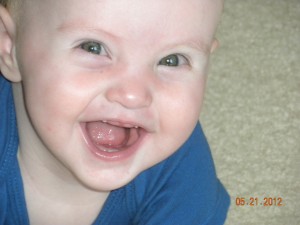