Brennan has been very busy since she turned six months old. She is definitely rolling over now, pretty much as soon as she is put down. She is SO proud of herself for doing it, too. Probably because we cheered the first 20 times she rolled over. Which of course means that she’s already trying to crawl. Basically, she uses her feet and turns herself in circles right now, but I swear it won’t be long, those chubby knees are getting some air time.

What really cracks me up is the anticipation of events that she has. Like seeing the teething ring coming toward her, and she opens and reaches out her hand, and opens her mouth at the same time. Quite a few lumps on her gums, but no breakthrough yet. She also seems to enjoy making herself laugh at ? She giggled the other day, and THEN put her mouth on her arm and blew a raspberry. Somehow the cogs are all working in there together, it’s just a code we have to crack. I’m glad she’s having a good time, though. 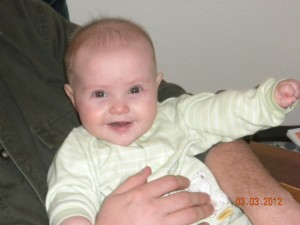 Sisterly hugs and kisses are a thing that happen repeatedly in a day. This I didn’t really count on, because my brothers were not affectionate with me. I try and keep her in my arms for hugs, so she doesn’t get her belly pushed on, her hands squished, or neck wrenched. Keeley’s a good hugger, but she’s dangerous! Sometimes, it’s tiresome. The minute I sit down to feed Brennan is when Keeley wants to hug her. I try to avoid this by making her give post-bed and post-nap hugs, so it’s ‘out of the way’ before settling down for a ‘snack’. It’s hard enough to keep her fed with a little screechy tornado running around.