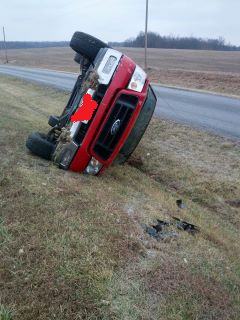 Yeah, I did that. It iced here, apparently. Matt went out one direction, and it was fine. He drove 55-60 with no issues. I called and told him it was slick, etc. etc. and he said, just drive slower than I did. So I drove slower than that. Bump in the road + ice =fishtail and a roll. (I was NOT on the phone while driving). If anyone says that it doesn’t matter how you treat icy roads and that every district does the same, here’s proof that they’re wrong.

Keeley was with me. We’re both fine as far as we can tell. Not so much the truck. This was our trade in. Was going to be, I should say. We’re not sure what will happen. Tow truck driver seemed doubtful it would be fixed because of how it was crushed.

I don’t ‘love’ many things. I love people. But this? This was my truck. Yes I am speaking of it in the past tense, as if it had feelings, and is perhaps dead. It has crossed my mind that it knew it was being replaced and went on a suicide mission. What, you’ve never had a car act up if you talked about replacing it? It did its job though. Did it well.

So did Keeley’s car seat. You know, the one that was supposed to be Brennan’s.But she was held in tight, sideways. Until I smartened up and took her out of it and held her, standing on my window.

We do have insurance, and it’s automatically deducted every month, paid in full, and has been for years. Guess we finally have to cash in on that investment so to speak.

Not one of my better days. I had a little bit of blood on the back of one of my hands, like maybe I got a bit of glass on it. Also felt like I was spitting glass until I swished my mouth out and brushed my teeth. Can’t seem to find anything wrong now except a little achy. That could change. Who knows? But for now? We’re okay.