B’s room is like a jungle. Themed. Found this little guy on Kohl’s website for $2.50 (he was paired with a Christmas book and they were clearancing out all their Christmas stuff). The books were sold out, but there he was. Including tax and shipping, under $5… and this poor kid only has one other stuffed animal, which WE bought her for Christmas. K ended up with about 30. 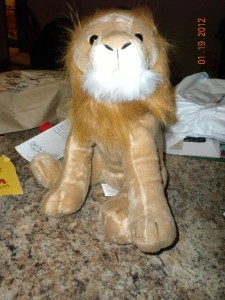 Excuse the mess on the counter. They have several book/animal pairs there with Eric Carle books. I sent 3 Eric Carle books (no animals) to some old friends of ours who just had their first baby.  They asked for books. I checked online and compared the # of pages of the books and they were similar, but the price was about 1/2 to 1/3 of a ‘regular’ book. I have no idea why, but $5 for a 22 page board book doesn’t seem so bad to me… and if it’s anything as awesome as mr. lion is? They’ll have some huge smiles on their faces!

Went back to look and he is all gone, but you might keep an eye out, never know when you might snag a few of these for the gift shelf!