This was supposed to be posted Oct 2, 2011. Ooops, I was waiting on us to figure out what to do with some pictures, and umm, yeah, fail.

Matt’s work had a party. He had signed us up to go, and reminded me the DAY before it was supposed to happen. I was feeling okay so we decided to give it a shot. It’s a place that has a pizza buffet, a kids area, and adult area of games, go kart track and bumper cars, plus private dining rooms and mini golf. It wasn’t overly huge, they did a good job at keeping the place compact. I had not heard of this place before moving here, so I’m not sure if it’s nationwide or not, but Keeley had a good time. His work gave us each $15 game cards. I played skee ball a couple of times, routinely hurting my knuckles by rolling a ball while simultaneously trying to stop a ball that Keeley had rolled that came rolling back to us. Not quite enough oomph.

She really liked the ‘whack a mole’ that was cats and mice on alternate sides, you’re only supposed to hit the mice, not the cats, so she didn’t get a whole lot of points, but then again it didn’t matter much.

On the other hand, this is how Brennan felt about it… 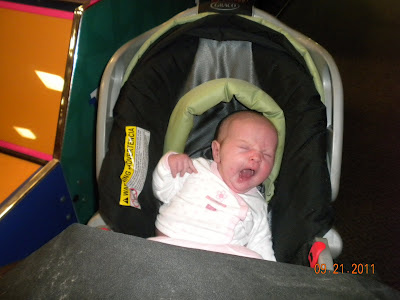