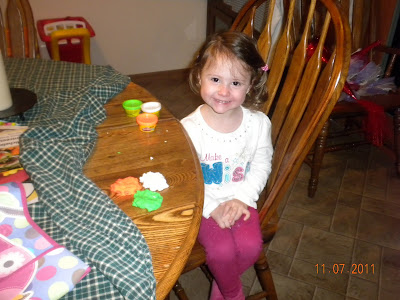 Where is she, where should she be, where am I?

This is my big kid. Mussed hair and all, she’s gorgeous, right? She wants to color with markers, brush her own teeth, put on her own clothes, and pick out her own ‘shows’. She plays pretend, she has imaginary friends that come and go, she makes up language when she gets mad at me, she now treats certain ‘small’ stuffed animals as her babies, but the bigger ones are their mommy and daddy. She’s creating solid lines in her brain of what means what and how things are represented in the real world (babies are small, so small stuffed animals are babies). She’s swimming like a fish, running, jumping and attempting to skip. All these things are making me feel like she’s a really big kid, but she’s not.

She wants to put on her own clothes, but tries for approximately 5 seconds before throwing a tantrum and waking up her sister. We’ve been working on ‘clothing’ for months. She knows HOW to do it, but ‘forgets’ every single time. It’s like she NEEDS me to remind her to put her arms in her shirt and THEN pull it over her head. Any other way does NOT work, and she knows that, but can’t seem to make the connection. I can’t just say ‘ finish putting your shirt on while I pee’ — it’s like I’m abandoning her or something, even though I’m in the next room talking to her, it’s like the on switch flips for frustration and screaming on her part. She can’t make up her mind between tv shows, and when I go to put something on, she’ll again throw a tantrum, even if that’s what she said, she ‘changes her mind’. I’ve been working with her to NOT scream. For grown-ups, and even big kids, we’d simply just state the problem, but she doesn’t seem hard wired to do that yet. I have trouble with this. Why can’t she just say ‘I changed my mind, I want Y0 G@bb@ and NOT Bl00s Cloos’? So, we repeat this, over and over, ‘stop, don’t scream, cover your mouth if you have to, and simply say ‘I changed my mind’. For more for than a year, she asked politely for food and drink, and all the sudden she’s DEMANDING, not using manners. When I remind her, she looks away and folds her arms in a huff, saying ‘pwease,’ and huffing her breath out, looking away, like it’s just TORTURE to be polite. She doesn’t get anything unless she is polite. So now I’m reminding her ‘use your manners, and look at me and SMILE’. It reminds me of autistic kids that won’t look at you when they talk to you, but she’s just being a jerk. I know there’s nothing ‘wrong’.

I have a lot of trouble meeting her where she is. I don’t want tantrums. I’m sick of it. I’ve never once given in, and that’s supposed to extinguish them automatically according to child psych. Well, right. That doesn’t work with her, apparently. I want her to be a big kid, but stay where she is. Did you know we’d never given her play doh? I didn’t really think she was old enough for it until she was 3, and didn’t want the mess, but she got some in a birthday party treat bag last week, so I let her play with it. Come to find out, she’d already played with it at church. It took a lot of gumption on my part, but I didn’t intervene, I just gave it to her. A lot of times I feel like since she’s the youngest everywhere, all the other kids are going to think she’s stupid since she doesn’t play the way they do. Then they would always assume she was stupid. Normally, I would tell her HOW to roll the play doh and sit there and say, ‘yep, that’s right’ or whatever, but I’m struggling to try and do better, and let her be where she is. If kids want to assume she’s stupid, that’s their problem. So I just told her not to mix the colors together and let her do what she wanted. It consisted of pinching the dough out one little piece at a time and stacking it up. Then she said, ‘it’s a smiley face, mom’. Sure enough, 2 eyes and a nose. Or eyes and a mouth. She recognized it both ways. That’s something. I just still struggle to meet her where she is. Why does she talk and play like a 5 year old but throw tantrums because she has to wait 1o minutes for something insignificant? This is me, banging my head against the wall, wanting her be a little kid, but needing her to take some responsibility because I DO have other things that I need to get done that don’t involve her, and spending 10 minutes calming her down while I practically pee my pants so she doesn’t wake up her sister is just not fair to anyone. That time could be better spent reading books, playing with toys, etc. I’ve explained this to her repeatedly, but all it seems to do is cause more tantrums. I need to meet her where she is, I wonder where she should be, but I’m not even sure where I am at this point.

The thing is? Everyone else seems to adore her. Not that I don’t, I’m sure you know by now, right? But really. Either everyone is super extra special nice because they feel sorry for us, or they really do love her. At the library yesterday? They commented that she was ready for kindergarten and asked if she was going to pre-school. You can read more on my thoughts on that HERE. They said that some schools focus more on academics and some just on social interaction. I hadn’t thought about that, but of course we can’t or won’t afford private care, so it’s whatever a small school district can handle . The point to all this is that strangers are able to meet her ‘where she is’ and appreciate her being 3, but it’s a daily struggle for me. When I sit back and watch her interact with other people, it’s amazing, she says all these GREAT things and with me, it’s demand after demand and bad attitude all the way around. I just don’t get it.