I know everyone mentions the terrible twos, and tantrums and so on, but no one mentioned how to deal with this when you’re currently carrying around a 15 extra pound burden, you can’t run, and your 2 year old decides to run into traffic in the parking lot. Obviously, telling her to be careful or the damn car is going to hit you didn’t go over with the other mother in the parking lot. Same snotty face back to you, lady. I’ll take my kid’s safety and you can keep your dirty look to yourself. Obviously, we have well established rules around here. Most of the time, they are followed. It’s when we get out in public that I have the biggest issue. The parent police are everywhere, judging you. I tend to give other parents a sympathetic smile, I’ve been there, but not everyone is so accommodating.

Granted, we have plenty of issues at home. I think I yelled so much Friday that the fetus AKA Kickypants started cramping on me. I had the same issue when I was first pregnant. I had to stop and sit down, for fear something awful would happen. Now, I try REALLY hard not to yell, but, you know, when you run out into a parking lot full bore with traffic coming at you, it’s going to make me yell at you. Especially since we JUST had a discussion about holding mommy’s hand and going straight to the truck 2 minutes before that. I fear if I hold her any tighter, I’m going to break her arm, or someone is going to automatically call DCFS, after all, if she rotates her arm just right, she WILL get a spiral fracture. Don’t get me wrong, I REALIZE that she’s 2. But what will the excuse be when she’s 3? That she’s just a horrible kid?

She did fine with bible school, she never wanted to leave of course, and I think that’s the issue. She gets somewhere and doesn’t want the fun to end. We’ve been going to library time at 2 different libraries for a few weeks now. She enjoys it, one of them is basically story time and another is stories, songs, and a craft. This week she made a magic wand from a dowel rod and pipe cleaners. Okay, I had to make it, but she picked out the colors and gets to wave it, so it’s hers. They gave her a ‘birthday hat’ she calls it, too. A tall cone hat with a bit of wispy stuff on the end. Very fairy princess like. I’m glad she loves that kind of stuff, it’s nice for her to semi-socialize with other kids, but the whole tantrum, generally occurs before we go AND when we’re ready to leave. She doesn’t want to go to the bathroom before we go. She doesn’t want to go get straight in the vehicle, and heaven forbid that we are running late, that we’d just do as we were told without being yelled at and threatened. Then she doesn’t want to go home, and she throws a huge fit, not kicking and screaming of course, but pulling away from me, and obviously, as stated before, putting herself in danger. What’s next? Handcuff her to me? Put her on a leash? I just don’t know.

I’ve started telling her about making a good choice, and CHOOSING to be happy. You know, you may have to go home, but we have good things at home, too. Why don’t you choose to be happy about going home and playing with your toys… etc.

We do have good days. Those revolve around all the answers to questions being yes. Obviously, she doesn’t like being told ‘no’. Even if I explain to her 15 times why she can’t or shouldn’t do something, it makes no difference. The cognitive level isn’t there. Where is my meek child of 10 months ago when we started thinking about getting pregnant? Why couldn’t I see the implode coming in that sweet, sweet smile? 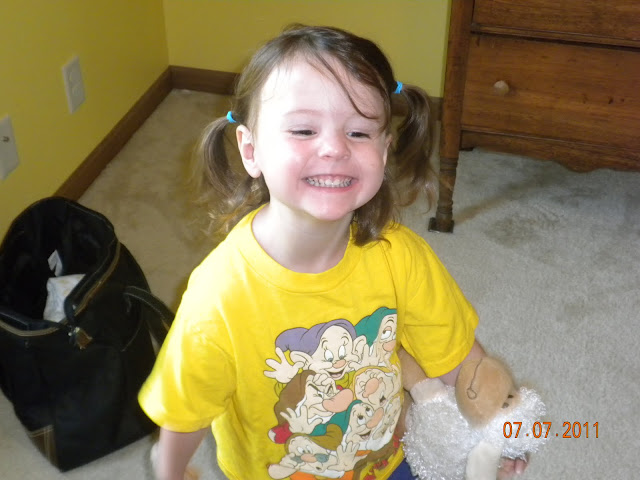