In answer to some discreet queries, no, no one made it in time. I don’t think the hospital even called anyone until after the fact. So my husband broke laws in a dozen counties to try and rush to make it, and it was unnecessary.  While I’m glad he did go, I wish he would have known he didn’t have to risk his own skin in the process. The main thing is, that he was with his grandmother and sister, and his step-mom (and whoever else was there, I didn’t ask, so I’m not sure)–in their time of need.

I mentioned, we were supposed to have our ultrasound that day, it’s rescheduled for this week. My parents will again be coming down. I called and let my mom know, and she was a trooper, she called our church back home and got the announcement over there, and then the next day made cobbler to take to Matt’s grandma’s house, and some fresh cookies to take to his step-mom’s house (she has I think 12 grand-kids)–they were still warm when they got there, I’m sure that was a comfort to them. I got our church called. They called back to make sure we didn’t need anything, and they made the prayer list go around down here, too, so several people already knew before the announcement made in church this past Sunday. They (pastors) offered to talk to Matt if he needed it. So far he hasn’t taken them up on it.

We went down Thursday for arrangements. I stayed at the funeral home as long as Keeley stayed quiet, and then went to my mom’s — she was kind enough to make lunch for the 2 of us. Matt ended up at his grandma’s for lunch, which was fine. Made sure everyone there ate something, anyway. We got back to Matt’s grandma’s in time for her to turn around and leave to take care of a few things, but I found out they would be doing a funeral meal at her house on Saturday after the services, so I was able to figure out a couple of things to make. The rest of the weekend I just tried to be there for Matt. He spent most of Friday just in front of the TV.

We had to leave early on Saturday, and despite having to go back to pick up the deviled eggs and angel food cake (which, when reading, is almost a loaded combination to have taken–given the devil versus angel thing, which I did not realize until this exact moment–sigh)… anyway, we made it time to pack up with the rest of the family to go to the funeral home (his dad’s sister and family having gotten in the night before from MN) and do a quick viewing before the public arrived. I didn’t know his dad very well, but without him, I wouldn’t have my husband or my daughter — or fetus, or future fetuses if there are any, so I silently thanked him for that. I know my husband said something to his aunt, but I have no idea what it was. I was dealing with Keeley. Which is sad, the only insight I might have gotten into his state of mind (since he’s not sharing with me), and I missed it.

When Keeley got too anxious, a couple of ladies just said they’d keep an eye on her, which left me there with Matt to do the receiving line. She had just gotten REALLY bad when I peeked around the corner and my parents got there. Bless them. I handed her off and said ‘she’s upset’. Walked away. I knew she’d be fine with them. They decided to stay and go out to the graveside, which they normally would not have done, but they decided we might need some help with her. Which we did. Otherwise, Keeley was really good during the whole thing. The funeral was done by the minister at our ‘old’ home church, who knows us fairly well. I stood and talked to him briefly when it was over. Mom and dad were chasing Keeley across a green space at the edge of the cemetery. Literally. It’s hard not to think of how life goes on when you have a 2 year old–chasing robins. Or a squirmy fetus inside you.

While this was not a deep trauma to me, it will still leave scars on our hearts. Matthew will never have his real dad to talk to again. His dad was only 55. The illness/disease presence was sudden. Others mentioned to us Saturday that they had spent time with him earlier in the week and he seemed fine. We didn’t get quite the right information, we were told he had one 100% blockage, but the rest were 40%, and that wasn’t right, it was the rest were 70% blockages. They waited a day to do the heart cath, and then 2 days for the surgery, and it was just too long. Matt had planned to go down for the surgery, but again, we didn’t even know how bad it was until later.

At the funeral meal, I made sure everything was getting put out and set up, then got Matt something to drink, and the 2 of them something to eat. I checked on them a couple of times and the food again before I finally got something to eat.  Tried to see if his grandma would eat, she finally did. Keeley ran about happily playing with the other kids, not a care in the world. For her, it was just another big gathering. We left, I offered to come back and help clean up, but no one took us up on the offer.

One of my nephews had a birthday, and they had planned the party for that evening, so we went out to my parents and visited until after 7. Matt got teary as soon as we started driving again, as long as he was busy, he was okay. We finally got home around 9. I went to church alone. Matt and Keeley did dishes and played couch potato the rest of the day.

I only have a couple of pictures online, so I’ll share one. 5 generations. Who thought that the middle link would be gone before the older 2? Too young, too soon. Too sad. 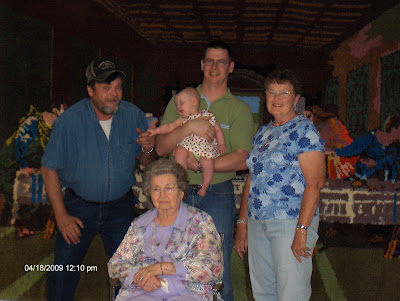 Keeley, Matt, his dad, his dad's mom, and his grandma's mom (seated).