Earlier this month, we went to a picnic in a park for Matt’s work. He only knew about 10 people there. I knew less than that. Added to the fact that I was wearing really tall shoes because it was either that or flip flops and roaming around after a toddler was quite difficult. Matt’s buddy had his infant there. They stuck him in a car seat on a stroller (black) in the heat and then brought 2 fans and plugged them in on top of him so he would stay cool. Neither of us could figure out why they didn’t just take turns holding him, considering that would have been a lot cooler on him anyway. Oh well.

I didn’t have a good time. It’s hard when you don’t know anyone and you don’t live close enough to make forging a relationship with anyone seem applicable. It was Keeley’s first experience with playground equipment. She was thrilled. She didn’t want to leave. She screamed as a matter of fact. I know it’s all a part of the learning process, but still. Jeez. She did the same thing at the mall this week, too.

They set up a sprinkler and that was a good time. She kept turning her face away from the spray. They also had a tub set up for kids to fill water guns from. Keeley played with the guns in the water and generally got all kinds of wet. I only managed a few pictures, so… here ya go! Hope you enjoy! 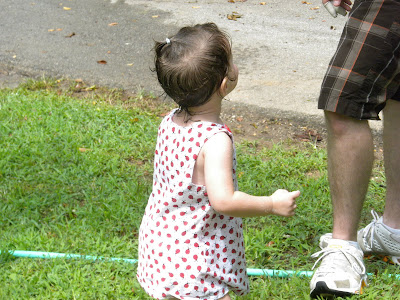 Check out my husband’s leg in that picture. Awesome shorts, right? That was his (very) late father’s day gift. 3 pair of shorts and 3 new polos for work. It was LONG overdue. They look SO much better than his blue jean ones, which are now paint smeared and all that from working upstairs! 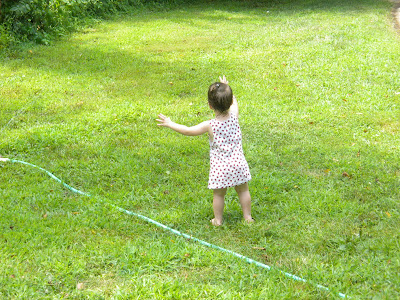 Trying to catch the spray 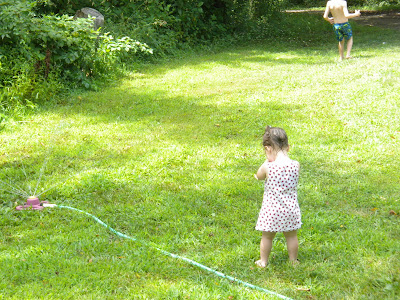 Oh no! It caught me instead! 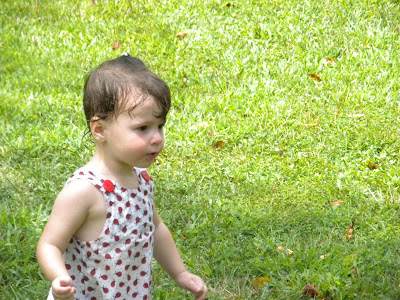 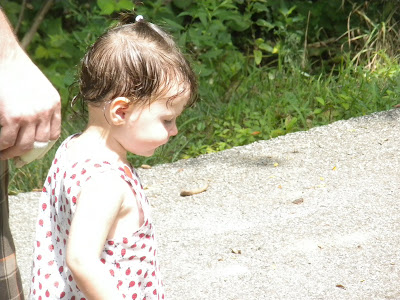 Notice my hubs’ fingers. He chopped them up while doing the flooring upstairs. He still has some pretty wicked scars, however, they just blend in with all the lines on his knuckles, since that’s where they ended up.

Well, that’s that. Keeley had fun, I tolerated it, at least it wasn’t blazing hot. The end!