We went to the county fair parade recently. Keeley had a good time. We managed to squeeze in between a 4 year old girl and some older kids, but since Keeley was so small, they left her (and her candy tosses)–alone. 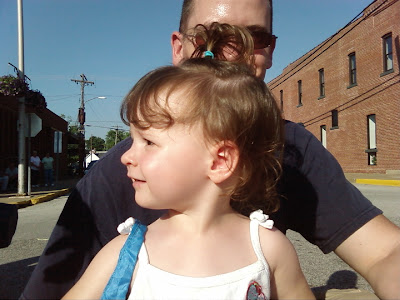 Waiting, listening to the sirens

It was a pretty good experience and makes me want to take her to the homecoming parades in the area, and we talked about going back to the big fall parade that’s close to my family–usually at least one set of kids is walking in it for boy scouts or whatever. She danced for the band and whatever music came along- much to the delight of the band director in the vehicle and the pom pom girls. Since it was for the fair, there was a calf and there were horses at the end, but there were quite a few entries, just for the fun of it, I guess.  She mooed for the horses, because I mooed for the calf, I suppose.  I tried to whinny for her, but she didn’t seem to get it. One of these days. Every county princess and whatever was also in a convertible. Much to Matt’s delight, Keeley pointed at all the cars and tractors and seemed thrilled. 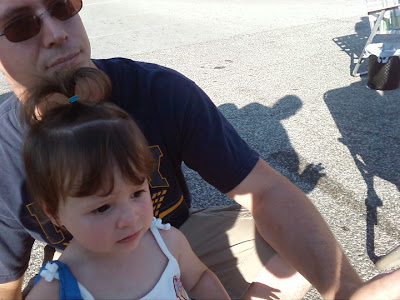 We gave 99% of the hard candy and gum to the bigger kids next to us. In return, seems like they left some suckers and the chewy stuff like tootsie rolls a little more often if it rolled in front of them. Once she figured it out, she had a great time picking the candy up. I’m positive she didn’t have ANY idea what the candy was. She was just picking it up. Keeley gave some of her candy to the little girl, and put some in her bag. What a nice, sharing girl! So proud! There’s still a ton, after giving a lot away.

She kept scooting closer to the little girl, so I had to move her over about 200 times, but she didn’t run out in the road. The little girl’s mom didn’t seem to mind at all. She just laughed and said it was okay. The sirens or horns gave her pause, but with a reassuring touch, she did fine. She’s really growing up. 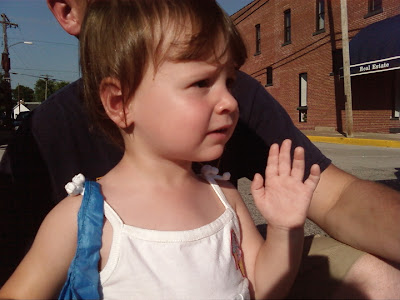 They gave away quite a lot of stuff, people went by with sodas, water, American flags, beads, and of course the obligatory candy. The grocery store even handed out mini ice cream sandwiches and Popsicles! I ate about 1/4 of the sandwich and Matt ate most of the Popsicle, but Keeley got a really good taste of each one and drank at least 1/2 the water. Luckily I was aware in advance so I brought a cloth wipe for her hands and face (we went last year, but of course didn’t ‘get’ anything because she was too small, but figured they might do the same thing this year-and I was right). Probably her favorite thing was the plastic hard hat with some politician’s info construction company’s guy who does construction but is running for a political office’s — info on it.  [I had to go back and look at it–so confusing]. Even a police officer was roped into walking the parade route, handing out stickers. She gave him the evil eye, even though he tried really hard to get her to smile. Maybe he tried too hard, or maybe it was the fact that he was dressed completely in black. I don’t know.

After the parade was over, Keeley really didn’t want to get in the car and be away from the other kids. Poor thing. 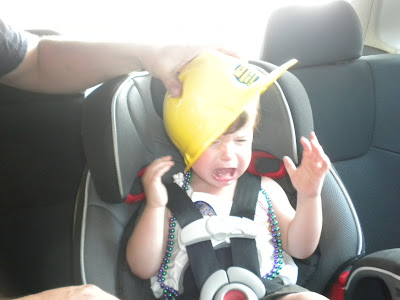 but I don't WANNA go!

Later, Matt caught me sorting the candy out. Tootsie rolls in one pile, gum and hard candy in another, then by flavor. Seriously? Don’t ask. He took a picture. 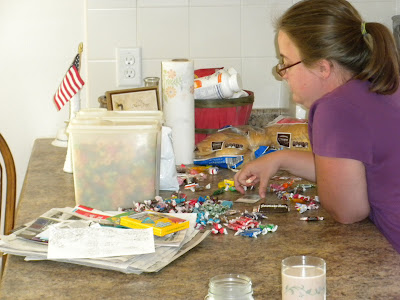 Nice of him wasn’t it? All in all, a great time had by all, until it was over. Then we were sad 🙁