Okay so we’ve had some human visitors that were most welcomed, and we’ve had plenty of animals hanging around that were okay too.

The 3 ft black snake was a touch creepy: 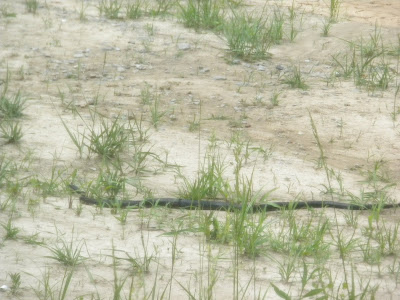 It was even worse when Matt came in on Sunday and told me we needed to start keeping the garage door closed (we had been leaving it open when we expected a package or a visitor, because the yard hasn’t reseeded itself and the porches aren’t up yet with steps to the door).  The reason why? See him, up above? Yeah him? Apparently he came in to shed his skin. Shudder. Now it’s outside the garage and I keep flinching when I see it. It’s going to have to be moved so I quit freaking out. We’ve also had a baby bunny, which Matt got captured and let go so Keeley could see it, and this morning, a frog. I tried chasing it out, but it hid, and he took the extra 3 minutes to chase it out, as it’s really a frog, not just a toad, and needs water, he would have died in our sweltering garage today. What a hero.

The MOST unwelcome visitors are the horse flies. These things are the size of large bumblebees and MAN does it hurt when they sting. The flyswatter is in the garage now, because they are flying in and attacking us as soon as we go out there. Silly things.

The most unique was probably the hummingbird. It saw the garage door pull down string-thingy (SUCH a technical term, don’t you know!) and tried to get some nectar out of it–poor thing.

In other news, the fawn still has spots, the yearling deer have antlers, The foxes are red, butterflies abound, and I really thought for a while that I had died and gone to heaven this morning while I was outside. It’s absolutely beautiful!