Just wanted to share that we’re living by our mantra here at LINBW! We take a walk nearly every day and if it’s not raining (which, darnit, it has been a LOT recently), a couple of times a day. Keeley and I often just go outside and she just, well, does her thing. She runs towards the mud, she picks up rocks, she says ‘ohhh’ a lot, and looks like a walking advertisement for child abuse. By that I mean she has bruised knees, scrapes down her legs, etc. I’m determined to let her fall down until she doesn’t, if that makes any sense. When we’re trying to get a move on, she does get to ride in the wagon, but she has conquered the whole driveway (uphill) by her own 2 little feet, which is quite an accomplishment!

A couple of weeks ago, she was walking down the driveway and went more sideways than anything. She was mostly concerned about having ‘that much’ dust on her, I think. I dusted her off, put her back on her feet and we went to the house to get a rag to clean her hands. It wasn’t until I looked at her properly that I realized she had bloodied her nose. So, like any good mom, I got a camera along with the rag and took a picture before cleaning her up. Life is not bubble wrapped, and she’s living proof. I’ll let the picture say the rest. 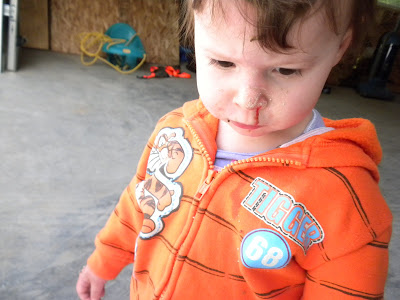