Oh yes, I mean baby girl has a wardrobe all set for fall/winter of 2010! 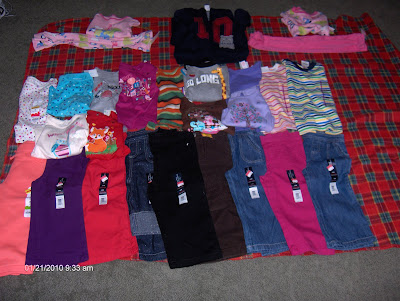 It cost me around $78, but doesn’t include shoes, a holiday dress, or winter outerwear. This is more than my summer 2010 wardrobe of around $50, but I found a lot of those items for $1 apiece. 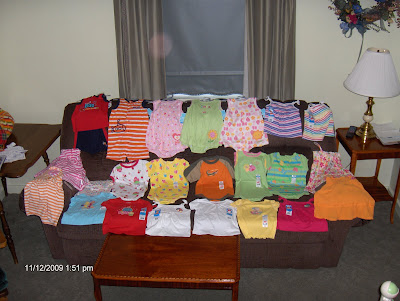 All of the summer clothes are 24 months, plus I grabbed either some shorts/skorts/skirts after this, and they are 2T, even in December from last year, they were still $3 apiece. Harumpf!

The fall clothes are 24 M in pants, 2T in shirts, with a couple of 3 T shirts, because they were cute and figured they’d go 2 seasons, the giraffe and owl ones. Since she’s getting mostly taller, but not as much so in the legs as in the torso, and she’s not gaining a ton of weight, we figured that the 2T pants would be too long (and lets’ face it, sometimes it’s only 24M or 3T, there is not a 2T option), and 3T for the most part the shirts would just swallow her unless she gains 10-15 lbs. If so, we will be happy she porks up and get her some bigger shirts,  I guess. However, as we were both scrawny kids, it probably won’t happen.

We are counting on her socks and pajamas (from Christmas) lasting through next winter. She seems to step on the pants a lot right now, so we will see. She is already wearing them now and unless for some reason it’s terribly hot in our new place!!! she can wear the long ones with no issues for summer, or we can try the 18 month ones from this summer back on and see if they still fit (since length won’t matter and she’s still in the weight range on those)…

Whew. Now realize that I’ve had to take into account the ‘fluffy diaper butt’ effect in all of this too. We can’t just buy ‘any’ pants for her, they have to have a certain amount of stretch, or they won’t fit over her diapers. We are also taking into account potty training in all of this, which is why even though some of her summer stuff is still onesies, after that, see you later, we don’t want any extra boundaries between her and the potty!

We tried to get a variety of colors, sparkles, and characters on her clothing, so that we didn’t end up with the same shirt over and over again. She even has some dresses in the summer clothes there, that we may be able to use with leggings as fall approaches!

How do you pick your kids’ wardrobes? Do you shop a season ahead? 2 seasons if there’s something really cute you just can’t resist? Let me know. I’d love to hear from some experienced moms out there! Also, snow suits for 2 year olds are hard to find! Any quick tips? I’ve searched online and the best deal right now is KMart/Sears, I found zero items, even COATS were ALL GONE from the stores as of 2 weeks ago! I did see 2 size 2T snow suits in Kohl’s but thought they were ugly and wasn’t sure I wanted to pay $35 for a snow suit. However, we’re not finding anything else right now, either, so we may head back there and pick the least ugly one, if they’re still there!