This week’s Fun Monday is being hosted by Sayre Smiles and she wants to know about our cars. More specifically: I want to know your car history.  What was your first car?  Which was your favorite car?  And what are you driving now – and why?

Well,the first car I drove was a ’78 Thunderbird.  Otherwise known as the tank. The car no one can destroy without a bomb. It had a V8 and it rocked. It wasn’t mine, though, it was a family car. After that, I drove a little Chrysler that would say ‘a door is a-jar’ every time you had the door open. Yes, I would yell at it often that a door was not a jar, it was a door, and the vacuum hose would pop off and leave you stranded if it got too hot. Then a jeep, once, but it also overheated and I vowed not to take it again, therefore I drove the Chrysler back and forth one summer for an internship. All family cars.

My hubby and I had a green 4 door Mercury Sable for a while. He kept whining about it until he had me convinced that something was wrong with it. Later he claimed he had said no such thing. So we sold it and bought a truck. THE truck. MY truck. So far, it is definitely my favorite, oh yeah and it’s RED! 😉 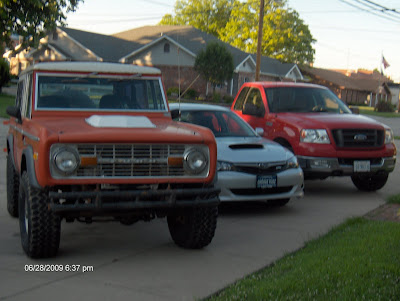 The other 2 in the vehicle, the silver Subaru and the orange Bronco are also ours. Elsewhere we have another Bronco ‘in pieces’ and a ’52 Ford F6 waiting to be restored.

I’m hosting Fun Monday next week. Topic/sign-up will be posted by Wednesday!